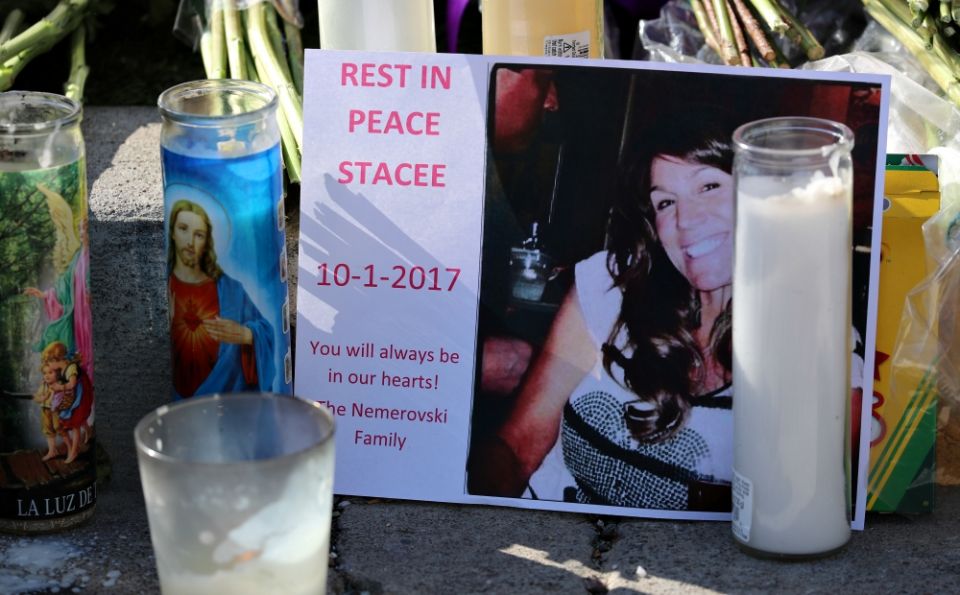 At a makeshift memorial along the Las Vegas Strip Oct. 4, candles surround a photo of one of the victims of the Oct. 1 mass shooting. A gunman, identified as Stephen Craig Paddock, 64, was perched in a room on the 32nd floor of a hotel and unleashed a shower of bullets on concertgoers below late Oct. 1. (CNS/Reuters/Mike Blake)

"It's the worst mass shooting in modern American history."

The above opening sentence is the exact lead sentence I used in a column last year, because last year's mass shooting in a nightclub in Orlando, Florida, was the worst in modern U.S. history, that is, until early October, when at least 59 people were shot dead, and more than 526 injured during a music festival in Las Vegas.

Now Las Vegas carries the tragic distinction of being the site of the worst mass shooting in modern American history. May there never be another place to bear that dreadful title.

But when a culture's decreasing respect for human life and its significant indifference to violence are combined with its easy legal access to guns, the results are not difficult to predict.

Guns do not make us safer.

According to CNN and many other reports, Americans own by far more guns per person than residents of any other country. Of the world's estimated 650 million civilian-owned guns, nearly half — 310 million guns — are owned by Americans.

The U.S. also has the tragic distinction of having by far the most mass shootings of any nation on Earth.

According to research compiled by criminologist Frederic Lemieux, "The higher the gun ownership rate, the more a country is susceptible to experiencing mass shooting incidents."

Lemieux reports that that between 1983 to 2013, 119 mass shootings occurred worldwide, with the U.S. accounting for 78 of those mass shootings. Sixty-six percent of all mass shootings in that 30-year period were in just one country — the United States.

Buying guns in the U.S. is far too easy.

Common-sense federal gun control legislation is obviously needed. Yet, Congress refuses to act. Arguably, the major reason for Congress' paralysis can be spell out with three letters: NRA.

The National Rifle Association mounts a powerful lobbying effort, and any member of Congress brave enough to back common-sense gun control legislation is targeted for re-election defeat.

Strong gun laws are clearly associated with lower gun death rates, and strict background check laws are the first step to keeping guns out of the hands of dangerous people.

Present federal law only requires licensed gun dealers to initiate background checks. And since gun sales often take place between unlicensed persons, approximately 40 percent of all firearms transferred in the U.S. are done without a background check. Congress needs to close this dangerous, giant loophole.

Congress also needs to ban assault weapons and large-capacity ammunition magazine clips, which have been used in many mass shootings.

Consider the sad fact that of the approximately 31,000 annual gun deaths in the U.S., 19,000 people shoot themselves to death.

Passage of universal health insurance — including full mental health care — also needs to be urged when communicating with your congressional delegation.

[Tony Magliano is an internationally syndicated social justice and peace columnist. He is available to speak at diocesan or parish gatherings. Tony can be reached at tmag@zoominternet.net. He will be speaking at Our Lady of Good Counsel Church in Endicott, New York, on Sunday, Nov. 19, at 3 p.m.]

Orlando is complicated, but the issue of gun violence is not