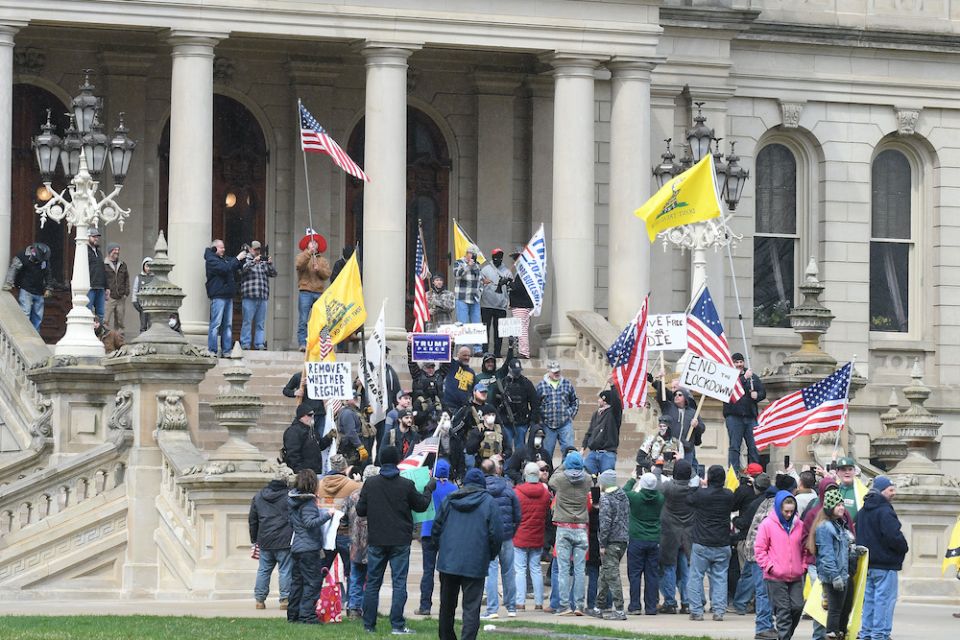 A group of protesters gather on the steps of the Capitol in Lansing, Michigan, to protest Gov. Gretchen Whitmer's executive orders April 15. (Newscom/The Detroit News/TNS/Daniel Mears)

The scene was the most unnerving of any in my political adulthood at least since the assassinations of the Rev. Dr. Martin Luther King Jr., and Sen. Robert Kennedy, and this scene also involved guns: Dozens of protesters armed with automatic weapons stormed the state capitol in Lansing, Michigan, demanding an end to enforced social distancing requirements made necessary by the coronavirus. Unnerving, but not entirely surprising.

The protest had some of the symbolic trappings of the Tea Party movement, for example: the prominent display of both U.S. and Gadsden flags, the latter emblazoned with the group's motto, "Don't Tread on Me." This Revolutionary-era motto was a tad excessive then, but at least the marines who hoisted it really were fighting for the principle that free men should not be disenfranchised, as the colonists were.

The crowd in Lansing is surely free to vote for the political leaders they desire, to be taxed only by their freely chosen representatives, is not required to quarter troops from abroad in their homes, nor risk being sent to London if they commit a crime. The 6% sales tax Michiganders pay exempts groceries, so there is no tax on tea either.

The mood was dark, but not the skin color of the protesters: This was a mostly all-white affair, as these libertarian events usually are.

The racist roots of modern libertarianism were well documented in Nancy MacLean's book Democracy in Chains: The Deep History of the Radical Right's Stealth Plan for America, which I reviewed in two parts, here and here. The godfather of the movement, James Buchanan, was unapologetically committed to states rights and proudly fond of John C. Calhoun. Watching the protest in Lansing, I could not but recall that George Wallace won the Michigan primary in 1972.

There were the self-contradictory signs invoking freedom when the absence of violence and the peaceful transfer of power have long been distinguishing marks of Western democracy. Only a deeply inadequate political theory would not see that the defense of the freedom of speech and promotion of self-government are essential to the protection of freedom and that bringing a gun to the legislature inhibits free speech and threatens the functioning of democracy. The only freedom these libertarians are committed to is their own and, while we can perhaps comfort ourselves that the protesters in Lansing were fringe extremists, the highbrow libertarians at the Cato Institute also operate from an impoverished, in their case excessively formal, definition of freedom. For them, the rich man and the homeless man are both free to forage in the dumpster for their dinner.

There was a sense of grievance driving the emotion of the mob, a sense that was palpable at Tea Party rallies in 2010, long before any virus infected the land. To be clear, America's working class has good reason to feel aggrieved, but it is the economic structures that flow from this same libertarian attitude that have left them as so much collateral damage in the laissez-faire, globalized economy. Unwilling or unable to identify the true culprit, they are happy to find scapegoats: immigrants, union bosses, "welfare queens." This sense of grievance has been nurtured by Republicans since Reagan's time, but it has been stoked into fever pitch by President Donald Trump. 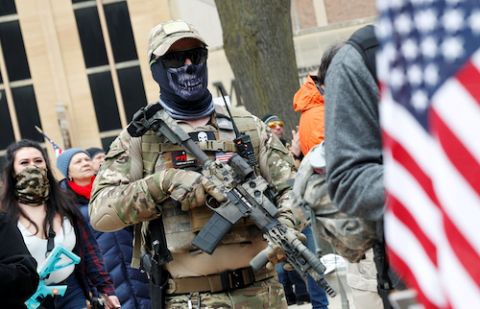 A demonstrator in Madison, Wisconsin, protests the extension of the emergency Safer at Home order by Gov. Tony Evers April 24 during the coronavirus pandemic. (CNS/Reuters/Shannon Stapleton)

True, the political left has been afflicted by socio-cultural memes concocted in academic laboratories, all of which tend to invite Democratic politicians to traffic in condescension. Remember "deplorables?" Only an activist political left, focused on economic justice, will bring any help to those cast aside by the Reaganite-Thatcherite economic landscape of the last 40 years. How grimly ironic that such political promise may be destroyed by the penchant on both left and right for culture wars rather than for political solutions.

Five years ago, Alan Wolfe warned us of the totalitarian core of libertarian ideology in a brilliant essay in Commonweal. He followed it up with an extraordinarily well-done conference on the topic at Boston College's Boisi Center, which he then led. The fact that libertarianism is at odds with Catholicism has long been obvious, which is why the courting of libertarian guru and funder Charles Koch by the Catholic of University of America was so repulsive. With my great friend Stephen Schneck, I helped organize a series of conferences on the wrongheadedness of libertarianism that began with a speech by Cardinal Óscar Rodríguez Maradiaga. This video starts with the cardinal being introduced by Richard Trumka, the president of the AFL-CIO. I hasten to point out that the defeat of libertarianism in our polity and culture will begin here, in an alliance of labor and the Catholic Church.

Those "Erroneous Autonomy" conferences started in 2014, which seems like a lifetime ago. Dark as the threat of libertarianism appeared then, none of us foresaw what we witnessed last week, armed protesters storming a citadel of democracy. The rest was predictable: the abuse of symbols, the racism, the self-contradictions, the totalitarian itch. But the threat of violence, expressed so openly and in such a raw fashion, this is new. Let the condemnations be swift and loud, before it is too late.