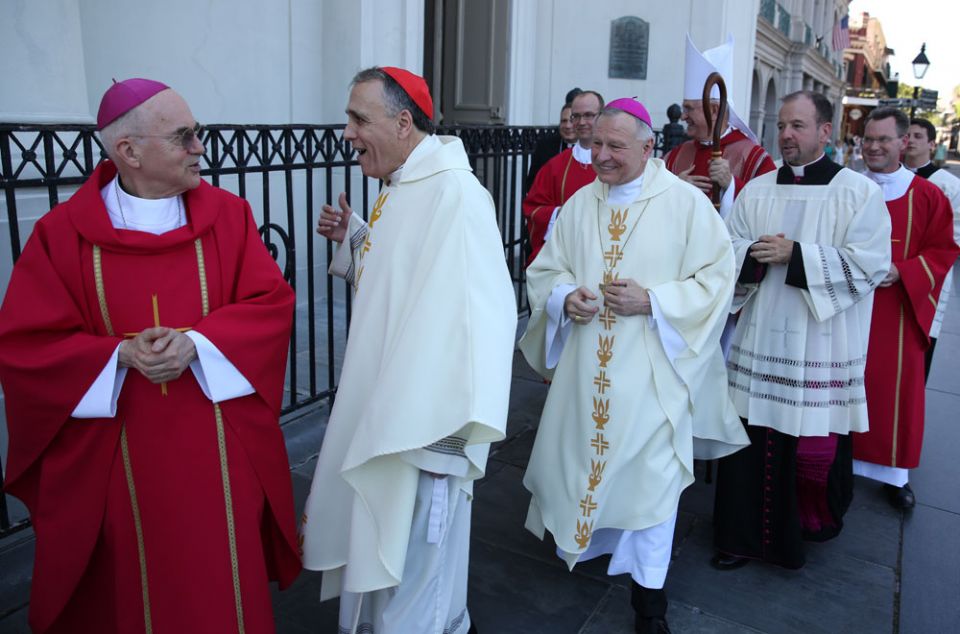 The anger occasioned by the scandal surrounding former Cardinal Theodore McCarrick is understandable, even if it is also frequently misplaced. As I noted Friday, accusations about who knew what are flying like rumors at a Renaissance court. I understand the anger and the sense of betrayal, to be sure, but it is impossible not to wonder where this outrage was when, for example, we learned that a report into sexual misconduct by Archbishop John Neinstedt was not only quashed but that the nuncio at the time, Archbishop Carlo Maria Viganò, ordered documents destroyed, contravening U.S. law. First Things wasn't outraged then was it?

I also am baffled by the sense of surprise. A priest friend from Washington visited me this summer and at dinner, some friends asked him if he was surprised by the news about his former archbishop. "Well, let me say I believe anyone is capable of anything, good or bad," he wisely noted. "But, I certainly had no reason to think McCarrick was involved in this sort of thing." It is surprising how quickly we move past that first, almost biblical reality, that betrayal of trust and abuse of power, to say nothing of sexual sins, are found in Genesis, yet somehow we always seem surprised when someone we know perpetrates these ancient crimes. Whatever else the woeful tale of ex-cardinal McCarrick is, it is entirely human.

An important conversation has begun about how the bishops should address the problems the McCarrick episode reveals: To whom should one report an allegation of misconduct against a non-minor subordinate like a seminarian? What penalties should attach? We are the most organized of organized religions, and so policies and procedures are not to be scoffed at. Norms are part of how a culture shapes itself.

In this case, the bishops who protest they are answerable only to Rome should insist Rome be answerable to them: The U.S. bishops should demand that the Vatican explain who in Rome received reports about McCarrick and what was done with that information. I wish we could subpoena Cardinals Angelo Sodano and Stanislaw Dziwisz, who were McCarrick's great protectors, but I doubt they would comply. And, on both sides of the Atlantic, the question must be posed: Who was informed about the settlements and what action was taken? As I noted last week, former Newark Archbishop John Myers and former Metuchen Bishop Paul Bootkoski must have known about the settlements, as would the nuncio at the time. I now add the name of a third American prelate to whom questions should be reasonably directed: Archbishop Timothy Broglio of the Military Archdiocese. If people were writing to the nuncio in the late 1990s and in 2000 to prevent McCarrick's promotion, and a delegation of people even went to Rome, Broglio would have known about it because he was Sodano's secretary in those years. What did he know? What did he do with that knowledge?

Yet, there is something deeper at work here, and that needs to be discussed also: an unhealthy hierarchic and clerical culture.

Almost six years ago, at the conclusion of a plenary meeting of the United States Conference of Catholic Bishops, I wrote a column that recalled something my mentor Msgr. John Tracy Ellis had written to his friend Jesuit Fr. John Courtney Murray in 1953: "Something fine and bracing has gone out of the American Church and it is difficult to see how it can ever be regained." The column focused on the role that the Romanization of the U.S. hierarchy had played in creating certain pathologies within the hierarchic culture. Some of those pathologies are manifest in the current moment.

A main problem with Romanization that pertains to this scandal is that bishops do not feel accountable to each other, still less to their clergy. Throughout the 19th century, the first terna proposing names for a new bishop came from the priests of the vacant diocese. The second terna came from the bishops of the ecclesiastical province. A bishop's selection throughout the 20th century and unto today has to do with who is in favor in Rome, who has a powerful patron, and sometimes basic competence is not expected. To be clear, I suspect there is a higher proportion of fine, intelligent men among the bishops than there is among a gaggle of politicians or a Chamber of Commerce. It is astounding to me that so many mediocre people rise to positions of authority in every walk of life. And, no system of selecting bishops will entirely prevent a dud from getting through. But, at the very least, we need a system that encourages a sense of mutual accountability among the bishops, and returning to the 19th-century method of proposing ternas would be a start.

The other suggestion I have made before and will make again is to return to the ancient practice of never moving a bishop from one diocese to another. From a theological perspective, a bishop's relationship to his diocese is, or should be, akin to that of a man to his wife, and the idea of transferring him to another diocese as abhorrent as the prospect of divorce. I understand that our most outstanding prelates today all served beforehand in a smaller diocese. Poor Cardinal Sean O'Malley is on his fourth! Not only would a return to the ancient practice squeeze a great deal of ambition out of the hierarchic culture, it would mean that a bishop would make his decisions knowing he had to live with the consequences, not with a view towards how some Roman official with the power to promote would view the decision. I believe ordaining a man for service as a bishop to one diocese and one only would change the exercise of leadership profoundly, invite the bishops to rethink what it means to be a leader in the church, how their role as an ordained leader differs from other types of leadership, and how they can better bring the sacramental reality of their leadership to bear in all their decisions. If nothing else, they might sound a lot less like lawyers and organizational accountants when bad decisions get them into trouble.

There also needs to be a great deal more transparency. It is a no-brainer that the bishops should adopt a policy that there will be no confidential settlements made regarding themselves except when the victim asks for it, and even then, the rest of the bishops should be informed about the fact a settlement was made. Yes, sometimes there are nuisance settlements which are easy to identify: They are for low-dollar figures. Still, err on the side of transparency.

I resist the idea of opening the appointment of bishops up to public scrutiny. How would you keep it from becoming prone to some kind of campaigning? But, it is past time that there be qualified laypeople on the Congregation for Bishops and, most especially, women. And, as the number of bishops worldwide has grown, is it not time to establish regional sections of the congregation that undertake the initial vetting process? These could, over time, serve as the kind of counterweight to Roman authority that was provided by local governments for centuries until the American and French Revolutions spread the idea of separating church and state. Ironically, it was that separation which led to Rome gaining total control over the selection of bishops, a development that has proven unhealthy.

This scandal has produced all the usual accoutrements: scapegoating, guilt by association, conjuring conspiracies in the absence of facts, and using it for unrelated ideological gain or self-promotion. These are as much a part of the human soul as are the capacity for sexual misconduct and abuse of power. The only institutional remedy are changes to the culture that promote transparency and accountability. These may not prevent a sick man, capable of intense denial and deceit, from moving up the ranks, but accountability and transparency make it less likely. It is all we poor humans can do.