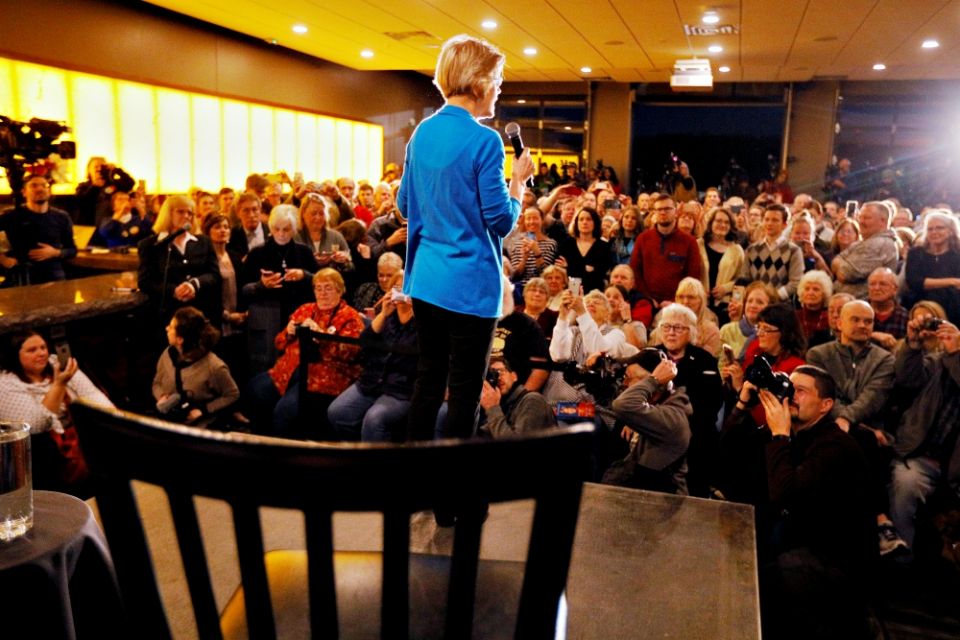 Massachusetts Sen. Elizabeth Warren speaks at an "organizing event" held at a bowling alley in Council Bluffs, Iowa, Jan. 4, after forming an exploratory committee for the 2020 presidential race. (Newscom/Reuters/Brian Snyder)

Over the holidays, I asked different groups of friends what they thought of Sen. Elizabeth Warren as a presidential candidate. While all my friends admired Warren enormously, the resistance to her candidacy surprised me. Some voiced the suspicion that the country was not ready for a woman president, others expressed the fear that the country was still more conservative than not. One woman friend, who spent a lot of time on the campaign trail this last autumn, said simply, "She is toxic in large parts of the country."

In an article in The New Yorker, John Cassidy summarized the case against Warren's candidacy while also refuting it. He wrote:

The rap on Warren is that she missed her best chance, in 2016, allowing Bernie Sanders to seize the mantle of populist tribune, and blundered last fall by rekindling the controversy over her ancestry. These are backward-looking critiques, the force of which is yet to be determined. What we know for sure is that, with at least a dozen Democrats thinking seriously about entering the primary, it will take someone resolute, resilient, and well organized to prevail. The successful candidate will need a message that distinguishes her or his campaign from the pack and resonates with Democratic voters. Since the prize is a head-to-head contest with Donald Trump, the winner will have to be someone who doesn't shy away from confrontation.

The other issue raised by many was the concern that Warren would be seen, inevitably, in light of Hillary Clinton's failed bid in 2016. The talk about "likability" started early, an issue that only seems to be raised about women. Karen Tumulty in The Washington Post dissected this concern and explained its limits:

Were it not for the fact that they are both women — and frequent targets of President Trump, those two things not necessarily being unrelated — it's hard to imagine a reason that Warren's bid would already be freighted by associations with Clinton's.

Tumulty noted the stark policy differences between the two women and the fact that in her first campaign swing through Iowa, Warren did not speak about Trump very much. But she misdiagnosed the rationale. "It is noticeable that Trump's name rarely crosses her lips, a sign she believes this message [of economic populism] can connect with some of the same frustrated middle-class voters who flocked to him in 2016," Tumulty writes.

That may be true, but it is also true that candidates whose campaigns are based on their opposition to an incumbent — Mitt Romney in 2012, John Kerry in 2004 — or on the strength of their résumé — Clinton in 2016, Bob Dole in 1996 — lose elections. People need to be excited about their candidate for her own sake, not just because they dislike the other guy, and if the first campaign swing through Iowa was any indication, Warren seems to generate an enthusiasm for herself and her message that is palpable.

Paul Krugman at The New York Times pointed to another challenge for Warren: lousy reporting. He asserts that Warren is in our day what Daniel Patrick Moynihan was in his day, a genuine intellectual turned politician, but that there is a media bias against intellectuals from the left:

Moreover, trivia-based reporting is, in practice, deeply biased — not in a conventional partisan sense, but in its implicit assumption that a politician can't be serious unless he (and I mean he) is a conservative, or at most centrist, white male. That kind of bias, if it persists, will be a big problem for a Democratic Party that has never been more serious about policy, but has also never been more progressive and more diverse.

Is our public space so dumbed-down that it cannot wrestle meaningfully with genuinely new and good ideas? Already you can see the effort at FOX and EWTN to paint progressive ideas as ridiculous, as if social democracies like Sweden and Denmark do not routinely top the lists of happiest countries in the world. The cult of capitalism has shaped the attitudes of many voters who are not FOX News devotees, and Warren will need to deliver a message, a moral message, that makes the case for the changes to our economic landscape that she advocates.

There is one other thing about Warren that I suspect people will become aware of as they learn more about her: She has a moral core that is remarkably strong for a politician. She took an active interest in finding a solution to Puerto Rico's debt problem, supporting the calls of the island's religious leaders to avoid the kind of austerity programs that would only harm the island's poor.

"Then, after Hurricane Maria hit, Sen. Warren was one of the first people to call me," says San Juan Archbishop Roberto González. "She asked if there was anything she could do to help and, in fact, she was very helpful in cutting through bureaucratic difficulties so that our Catholic charitable agencies could begin assisting people quickly."

Warren's home state of Massachusetts does not have a large Puerto Rican population. And, until now, her concern for and assistance to the island's inhabitants in their hour of need has received little coverage. The only reason for Warren to help was because it was the right thing to do, because she cared.

"I will always be grateful for her help," the archbishop says. I am betting there are more stories like this that will come to light in the weeks ahead.

Regular readers will know how committed I am to the understanding of American liberalism contained in the final chapter of Arthur Schlesinger Jr.'s 1946 classic The Age of Jackson:

Schlesinger, writing in the mid-'40s, was linking Franklin Roosevelt's legacy with that of Andrew Jackson, but his words could well serve as a succinct rationale for Warren's candidacy. If only we can all get past the sexist questions about likeability.

I am not yet ready to don any pompoms. I want to make sure Warren surrounds herself with a campaign team that understands why doing campaign events in a bowling alley, as she did in Iowa, is a good thing, but a campaign event at Harvard Law School would be a disaster. Every campaign needs an art historian as part of its advance team, someone who can visualize in advance the photos and videos that will emerge from an event. If not, you get Mike Dukakis in a tank. And I worry that a Joe Biden candidacy could scramble everything on the Democratic side, and not in a good way.

Still, I confess I find myself rooting for Warren. I can imagine her in the White House because I can imagine her in a union hall. She might be able to do what FDR did and William Jennings Bryan did not, unite rural and urban workers in a governing coalition strong enough to take back our nation's economy from the robber barons of finance. She might be the person to drive a stake through the heart of neoliberalism.

A version of this story appeared in the Feb 8-21, 2019 print issue under the headline: Despite the hurdles, I can imagine Elizabeth Warren in the White House .

Column | Despite the hurdles, I can imagine Elizabeth Warren in the White House

Debt crisis in Puerto Rico comes to a head