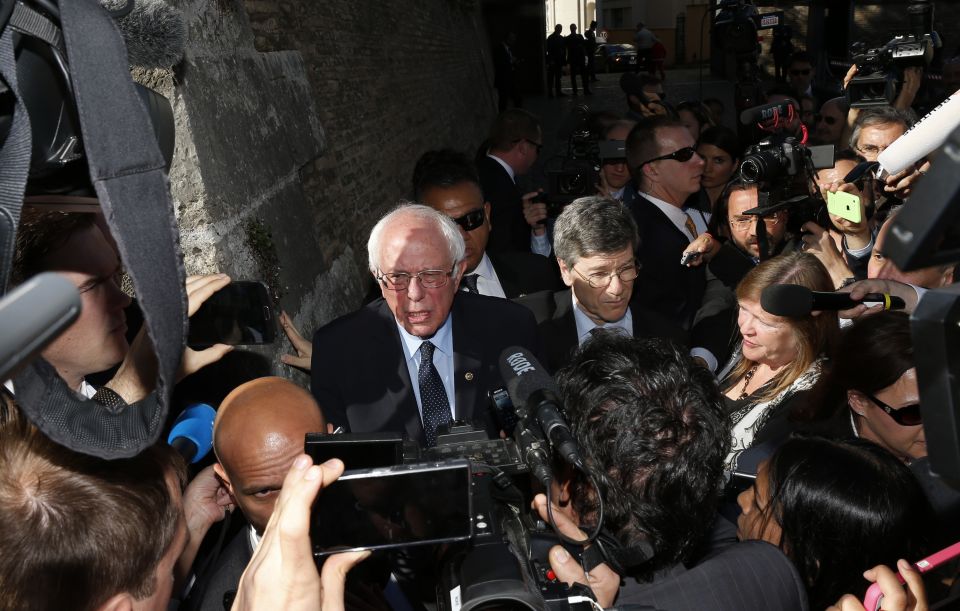 Sen. Bernie Sanders, speaks to media outside the Vatican after delivering an address at a conference on Catholic social teaching April 15, 2016. (CNS photo/Paul Haring)

Sen. Bernie Sanders is running for the Democratic nomination again and he finds himself at the front of the pack in both polling and fundraising. Polling at this stage is mostly a measure of name recognition, but a Morning Consult poll showed something interesting: Sanders not only led the race among declared candidates, he was the only candidate who achieved double digit backing as voters' second choice, no matter who their first choice was. While that poll indicated the race is very fluid at this early stage, there is nothing intangible about the cash Sanders has raised: It is in the bank and there is a lot of it.

Four years ago, Sanders ran as the dragon slayer, challenging the Clinton organizational power and the residual goodwill many Democrats felt for Hillary. She defeated him soundly, winning 34 contests to his 23, and Clinton garnered more than three million votes than Sanders, 16.9 million to his 13.2 million. And, because very few people thought he had a real chance, Sanders was unpolished and unscripted, he had the charisma of anti-charisma, and he easily edged out the more polished and scripted Martin O'Malley to become the alternative to Clinton. Another way of saying that is that he was authentic, running against Clinton for whom, we could say charitably, authenticity was not second nature. And, as the whole country learned in November, voters wanted authenticity in 2016, perhaps more than any other quality.

This year, Sanders is the dragon. Unless former Vice President Joe Biden gets in the race, Sanders is likely to be the frontrunner until events knock him out of that slot. Being the dragon-slayer took some of the edge off of Sanders' sometimes brusque, dismissive comments about Clinton four years ago. He could be a bit nasty about Clinton when he was chasing her, but his comments about her on "The View" last week seemed churlish and ungracious. As well, any slip of the tongue by Sanders, which might have been a 24-hour news story four years ago (or less), is more likely to get a lot of attention this time. This is why frontrunners and their campaign staff tend to become defensive: They want to protect the lead. It is deadly, especially if Sanders starts sounding scripted in order to avoid making mistakes.

The New York Times reported on Sanders' official campaign launch and noted that his speech included more personal references to himself than in 2016, when he tended to talk policy all the time. Supporters should be worried by this sentence from the Times' story: "His advisers are hoping that in telling voters more about himself, as he did at the rally on the Brooklyn College campus and as he planned to do on Sunday in Chicago, Mr. Sanders will offer voters not just his now-familiar policy positions but also a glimpse into the upbringing that shaped them." If he did reasonably well four years ago when the cards were stacked against him, why try and change the brand?

Nor is it clear that Sanders' political advisers are the best in the business. After his 2016 loss, he created a political organization called "Our Revolution." It is a remarkable thing how many congressional candidates endorsed by "Our Revolution" flipped seats previously held by Republicans in last year's midterm elections. The number? Zero.

Progressive candidates such as Alexandria Ocasio-Cortes and Ayanna Pressley succeeded in defeating decidedly liberal, veteran members in Democratic primaries, and went on to win easily in November. But, if an endorsement from "Our Revolution" was the Good Housekeeping seal of approval for progressive politics, progressive politics work better in primaries than in general elections, and Democratic voters are keen to select a candidate who can win against Trump.

I watched Sanders' appearance on a CNN town hall with Wolf Blitzer and he still talks with his hands and still has a strong accent and his hair is still unkempt. He repeatedly made the point that many of the issues he ran on in 2016 — Medicare for all, a living wage, tuition free college — are now standard fare among Democratic candidates. What then distinguishes him? An old white guy is not exactly a natural choice for a party that is increasingly non-white, and when the intervening years have only added to the sense that we need a woman in the White House. I worry that he will feel the need to outflank other candidates on cultural issues, which would be a disaster. It would distract him from his core message of addressing income inequality, and risks alienating voters Democrats need to beat Trump.

Four years ago, I could not bring myself to support Sanders' candidacy. I did not feel the Bern. Not because his stance on economic issues is so different from my own, but because his uncritical embrace of such stances led him to make some big mistakes. I still worry what millions of Americans will make of the fact that Sanders honeymooned in Moscow, before the wall fell. The problem is not what this fact says about Sanders' view of the Soviet Union, it is what it says about his views on honeymoons. And, four years ago, we had not seen the video of a shirtless — why shirtless? — Sanders playing a drinking game while visiting. Or his awkward unwillingness to call Venezuelan President Nicolas Maduro a dictator at the CNN town hall. I worry that whether or not Sanders really has kneejerk instincts, he will easily be painted as such. Ours is an unforgiving political climate these days.

There is no denying that in many ways, Sanders' losing campaign in 2016 ended up having more of an effect on the Democratic Party than Clinton's. He is right when he says that policies he embraced and she ridiculed are now seen as more mainstream. But, voters do not select a policy, they select a candidate. Sanders was the perfect underdog four years ago: feisty, opinionated, authentic. I suspect those attributes will not wear as well this year when he begins as the frontrunner.