Francis' trip to Myanmar, Bangladesh speaks louder than his choice of words 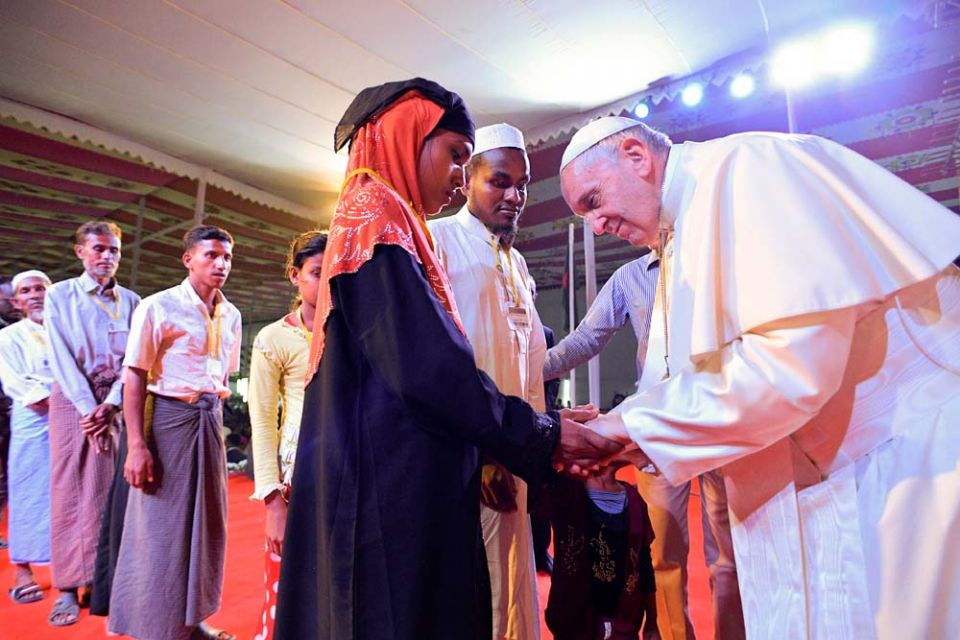 Pope Francis greets a young Rohingya refugee from Myanmar during a Dec. 1 interreligious and ecumenical meeting for peace in the garden of the archbishop's residence in Dhaka, Bangladesh. (CNS/L'Osservatore Romano via Reuters)

Pope Francis received his first sustained and serious criticism from the left during his visit to Myanmar last week.

Nay San Lwin, whose website Rohingya Blogger has been operating for more than a decade, used an old tactic when criticizing popes: Don't blame the pope; blame his advisors. Mr. Nay told The Independent, "If I have to blame someone I would blame Burmese Cardinal Charles Maung Bo ... In my opinion Charles Maung Bo violated the basic human rights." I'm not sure how the cardinal "violated" anyone and wonder why any pope would ignore the advice of his local colleagues on such a sensitive topic.

Even before Pope Francis left on his historic trip to Myanmar and Bangladesh, critics were setting down markers for his visit, insisting that unless he confronted the military leaders of Myanmar over their horrific treatment of the Rohingya, and used that specific word, he would compromise his moral standing.

Lynn Kuok, of the Brookings Institution's Center for East Asia Policy Studies, at least admitted that she would not be in the crosshairs of any reprisals, telling NCR's Josh McElwee, "I understand that and as an outsider I'm not going to suffer from it, but I find that a little bit hypocritical." But, she continued, "I don't see how the pope can not talk about the Rohingya and name them by name [without] appearing to condone the Myanmar government's position."

Amnesty International tried to soft-pedal its criticism of Francis, saying, "While it is disappointing that Pope Francis did not use the word Rohingya during his speech in Myanmar today, his calls for respect for all ethnic groups and an inclusive society are welcome. Pope Francis' visit has also helped focus international attention on Myanmar and the horrific crimes being carried out against the Rohingya people on a daily basis by Myanmar authorities."

Ya think? I am suspicious of some human rights activists, who work out of office suites in Manhattan and K Street, warning about the cowardice of those who do not confront tyrants. I also think human rights activists, like all activists, sometimes forget that the rest of the world does not swim in their pond, or at least not very often, and that Pope Francis brought more sustained attention to the plight of the Rohingya than all the press statements coming from Amnesty International combined. As well, some human rights groups, such as Amnesty International, make a mockery of their missions when they continually criticize Israel's settlement policies, which I also criticize, while saying relatively little about the horrors perpetrated by Palestinian terrorists.

The critics of Pope Francis for not speaking the word "Rohingya" while in Myanmar ended up eating crow after the Holy Father's powerful meeting with Rohingya refugees in Bangladesh, at which he stated, "The presence of God today is called Rohingya."

Let's be clear. We know President Donald Trump probably thinks Rohingya is a new dance step. We definitely know he has little sympathy for the plight of refugees. But, even President Barack Obama probably would never have gone to Myanmar in these circumstances either. The risks are too great, and what would be the upside? President Obama went to Myanmar twice, the first time to encourage the military's liberalization policies and the second time for a summit of Asian leaders. Even by the time of the second visit, it was clear that Myanmar's liberalization was going to be slow and uneven. 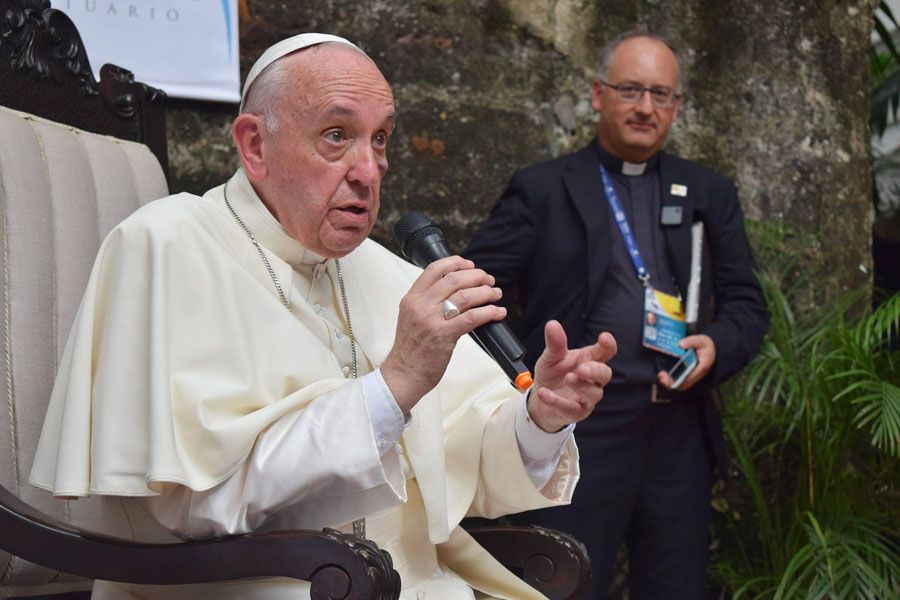 Francis understood, what the critics seem not to grasp, that while we all like to cop to a heroic stand, to speak truth to power, the concrete reality of a situation may need a less confrontational approach if you want your message to be heard. Last year, at the University of Notre Dame, Jesuit Fr. Antonio Spadaro spoke about the Holy Father's geopolitical vision, and he said, "For Francis, mercy is not an abstract concept. It is the action of God within the life of this world: in societies, in human groups, in families and individuals. God not only acts through the lives of individual people, but through the historical processes of peoples and nations. Even the most complex and intricate ones." No to abstract concepts of human rights. Yes to the laborious process of improving the lives of people, including respect for their rights.

Spadaro continued, "What, then, does mercy as a political category mean? Summing it up in a sentence we could say: never consider anyone or anything as definitively 'lost' in relations between nations, peoples and states. This is the heart of the political significance of mercy." The human rights professionals seem to have given up not only on the generals in Myanmar, but on Aung San Suu Kyi as well. She, who was once their hero, is now covered by their scorn. Perhaps she has sold out, but nothing in her past would indicate she was likely to do so. I think it more probable that she, like the pope, cares less about what others think about her and more about what can actually be accomplished in this historical moment, which may be limited, but will prove more real than any pie-in-the-sky yearnings hatched at a boardroom at the U.N.

The most remarkable thing about the trip was not this homily or that speech, but the fact of the trip itself. These countries have miniscule Catholic populations. Pope Francis went there because, as he has been urging us for almost five years now, the church must go to the peripheries, and Myanmar and Bangladesh are ecclesial peripheries to be sure. He demonstrated the importance on interreligious dialogue, not merely in the context of European ecumenism, but with Muslims and Buddhists too. He called more attention to the light of the Rohingya than any other person has done. And, he let all of Myanmar society know, from the generals on down, that we are all God's children and should act accordingly. What would be the headlines today if Pope Francis had done as the critics advised?

Column | Francis' trip to Myanmar, Bangladesh speaks louder than his choice of words

Cardinal Burke is inconsistent on 'constant teaching of the church'

Five reasons the synod is doomed to fail