Hooray for Carlson, but let's keep expectations in check 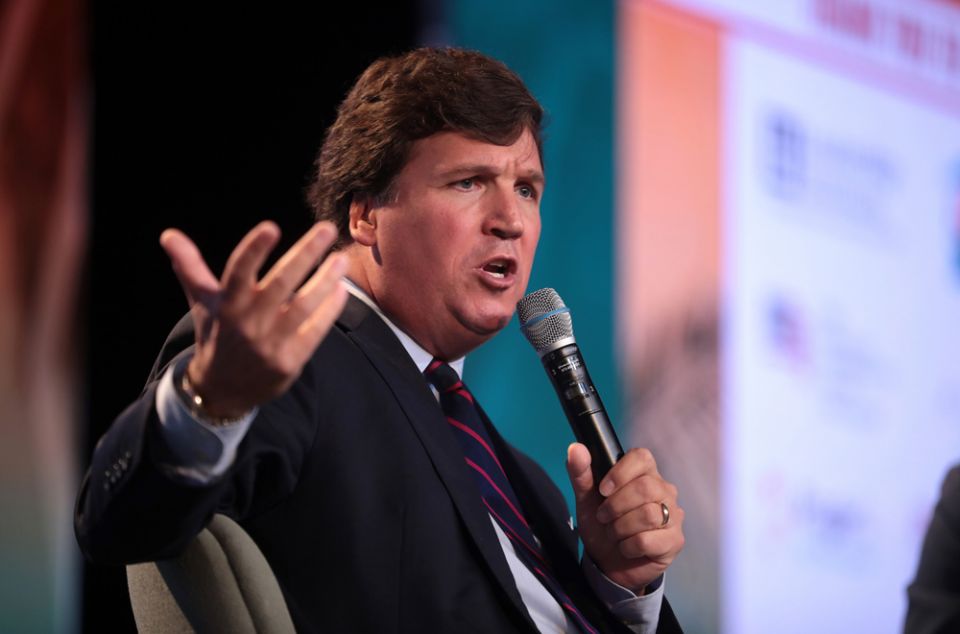 They should also speak out against the ugliest parts of our financial system. Not all commerce is good. Why is it defensible to loan people money they can't possibly repay? Or charge them interest that impoverishes them? Payday loan outlets in poor neighborhoods collect 400 percent annual interest. We're OK with that? We shouldn't be. Libertarians tell us that's how markets work — consenting adults making voluntary decisions about how to live their lives. OK. But it's also disgusting. If you care about America, you ought to oppose the exploitation of Americans, whether it's happening in the inner city or on Wall Street.

They tell us our multi-tiered tax code is based on the principles of the free market. Please. It's based on laws that the Congress passed, laws that companies lobbied for in order to increase their economic advantage. It worked well for those people. They did increase their economic advantage. But for everyone else, it came at a big cost. Unfairness is profoundly divisive. When you favor one child over another, your kids don't hate you. They hate each other.

Market capitalism is not a religion. Market capitalism is a tool, like a staple gun or a toaster. You'd have to be a fool to worship it. Our system was created by human beings for the benefit of human beings. We do not exist to serve markets. Just the opposite. Any economic system that weakens and destroys families is not worth having. A system like that is the enemy of a healthy society.

Carlson's monologue provoked a lot of debate on the right, much of it summed up nicely by Ross Douthat at The New York Times, who also contributed some thoughts to the discussion.

Douthat has always struck me as a broadly Burkean conservative, attentive to the organic, decent, suspicious of the progressive impulse to human improvement as a potential source of tyranny, but also suspicious of any divinization of market forces. Carlson's attacks on migrants betray him as the kind of populist conservative President Trump would favor. Carlson has stumbled across a truism — the ruling national myth in our country today is that man is made for the market and not the market for man — but he isn't sure what to do about it except vent his spleen. We welcome the criticism of spread eagle capitalism, no matter its source, but Carlson is still a commentator whose grasping at decency has a long way to go.

The limits of libertarianism, and neoliberal economics in particular, have been evident to many of us for some time and we should welcome all converts to the cause. Charles Koch may be celebrated at the Catholic University of America, but Catholic social doctrine has always recognized the erroneous autonomy that is at the heart of much modern economic theory. Reconciling Catholic teaching with American individualism is always problematic. Even the great Jesuit Fr. John Courtney Murray had to admit that the Second Vatican Council's decree on religious liberty had to skate around the thorny issue of whether or not a Catholic can conceive of liberty in negative or positive terms. If Carlson keeps stumbling into the truth and Douthat keeps pursuing it, they will recognize that the church's critique of capitalism rests on the very same principles as its critique of socialism: Both operate from a faulty anthropology. Let us leave these heady considerations to academics smarter than ourselves and consider the real world significance of this debate Carlson has sparked.

There are, in today's world, two icons of the viable alternatives to neoliberalism: Donald Trump and Pope Francis, and Douthat is no fan of either. Trumpism, with its emphasis on nationalism and winking at racism, is the right's answer not just to neoliberalism but also to contemporary, largely academic liberalism. For Trump, it is the nation or the race — and in the case of him personally, the self writ large — that describes and shapes human distinctiveness. For many on the left, it is the group or the race, the curse of identity politics albeit without some of the moral ugliness of Trumpism and more of the silliness unique to academic precincts.

For Pope Francis, as for Dr. Martin Luther King Jr., the Gospel demands both particularism and universalism. The latter, a key building block of liberal theory, has been corrupted by contemporary liberalism's identity politics, as we see in the American Civil Liberties Union's animus to religious liberty when it conflicts with reproductive rights or the slavish embrace of any and all claims made on behalf of racial or sexual minorities. The former, sometimes neglected in liberal theory, should be a bulwark against both remote idealism and the tyranny of any collective, but is neglected today in favor of libertarian individualism or group identity.

Douthat may think Carlson has ignited an interesting debate on the right, but the right is so willing to latch on to inadequate or bad ideas — didn't you know Douthat was going to mention the pornography industry as an example of bad capitalism? — and their politicians are incapable of standing up to the moneyed interest, I suspect the debate in conservative circles about Carlson's rant will be more titillating than interesting, and not very consequential.

I suspect the more interesting debate will be about Paul Collier's book The Future of Capitalism: Facing the New Anxieties. Consider this review by conservative writer Reihan Salam in The New York Times in which Salam observes that "the centrist social democratic ideal of Collier's youth, rooted in the habits of civic cooperation and mutual aid, gave way, on the one hand, to the arid utilitarianism of economists and, on the other, to the rights-oriented liberalism of lawyers who encouraged people to understand themselves as victims seeking redress rather than as citizens seeking solidarity."

Or, look at Diane Coyle's review of Collier's book. "I can't shake the feeling, despite only listening to the news while hiding behind the sofa these days, that it will take some cataclysmic event to reset current political dynamics," she writes. "Another aspect of the turn to individualism in the 1970s was the existence of an intellectual framework on which to hang the political transformation, and I don't see as yet a sufficiently broad and consistent alternative to the isolated individual, self-interested, rational choice model."

Mr. Reihan should read liberal Catholic scholar Meghan Clark on the The Vision of Catholic Social Thought: Virtue of Solidarity and the Praxis of Human Rights to find a corrective to Collier's diagnosis of the relationship of rights to solidarity. Ms. Coyle should read Quadragesimo Anno and Evangelii Gaudium and Laudato Si' and all the other great social encyclicals of the past century and more. There she will find "a sufficiently broad and consistent alternative."

Is it hopelessly idealistic to think Catholic social doctrine could emerge as this alternative? I cannot predict the future, but it is more than a little interesting that when Stephen Schneck and I started our series of conferences on "Erroneous Autonomy" back in 2014, it was organized labor that took an immediate interest in the topic, not the subculture of think tanks in D.C. In fact, on the political left, the populism of Sen. Elizabeth Warren and Sen. Bernie Sanders is keen to embrace the kind of solidarity we find in the great social encyclicals, even if it is unrealistic to expect an American politician to grasp the full implications of Christian anthropology in ways that will affect our politics, divided as it is into two parties that have both drunk foolishly at the libertarian well when it suited them.

So, one cheer for Carlson. He has, like a kitten, finally opened his eyes and noticed the rot caused by the spread eagle capitalism his hero Ronald Reagan, among others, championed. Two cheers for Douthat for deepening the conversation with some thoughtful comments and erudite observations. Welcome them into the world of capitalism's critics. But, I am not expecting something new and truly important from the conservative bleachers, compromised as they are by their association with Trump or their hostility to Pope Francis. The really interesting conversations are more likely to come from Rome and happen, broadly, on the left.

Column | Hooray for Carlson, but let's keep expectations in check