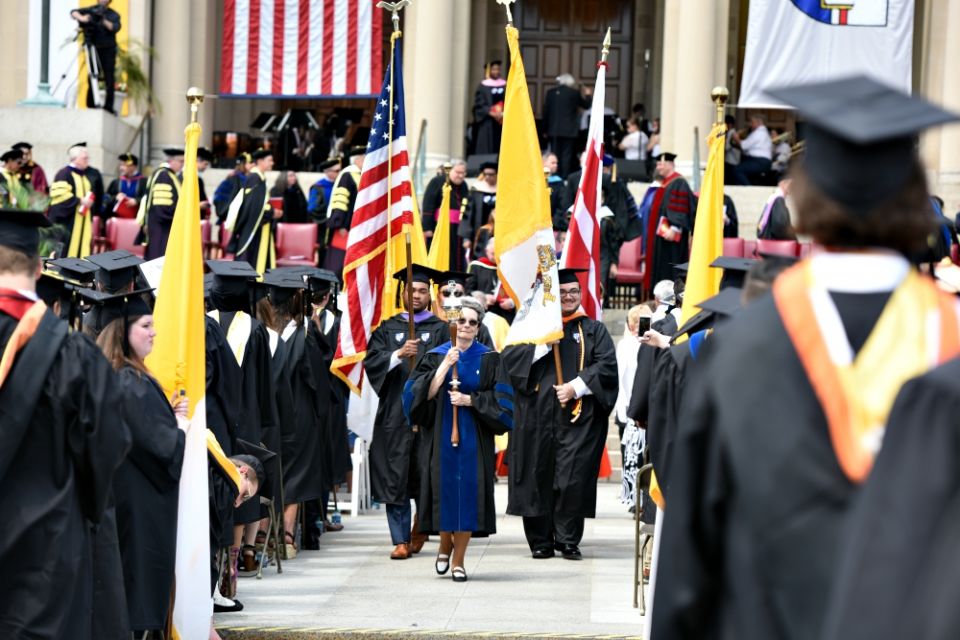 On Monday, I wrote about the problems at the Catholic University of America. Today, I would like to propose a different vision for the school's future.

If the bishops wish to save their university, and saving is not too strong a word, they need to think beyond the current problems, serious though they are. Renewal of an institution, whether it is a university or a religious order or even a newspaper, starts with basic questions.

The first question the bishops need to ask is easy to overlook: What do they want with a university?

Higher education is in a state of flux. It has become excessively expensive and too often detached from its roots, forced to prostitute itself as a kind of training program for high-paying jobs, when our colleges and universities were originally built to teach young people how to think. Many colleges and universities will shutter in the years ahead, unable to distinguish themselves, unable to justify the expense a family incurs, and, in this case, unable to warrant the time and energy the bishops must expend to keep the place going and to keep it Catholic.

In the 1880s, when the Catholic University of America was founded, the bishops of the United States knew precisely what they wanted: a graduate school of their own, so they no longer had to send their students to Europe for degrees, and they wanted a first-class institution that would serve both church and nation. Catholic University was very much the brainchild of the Americanizers in the U.S. hierarchy: Cardinal James Gibbons, Archbishop John Ireland, Bishops John Lancaster Spalding and John Keane. Catholic University was a bit of a bet on the significant role Catholics were beginning to play in American life, and it was a bet that paid off handsomely.

Back then, there were some colleges run by Jesuits — Georgetown, Boston College and Fordham — and Notre Dame was 40 years old, but these were not research universities. The Catholic University of America was, like Johns Hopkins, founded exclusively as a graduate school because that is what the Catholic Church needed, a Catholic university that could produce American scholarship, not European, and an American university that could produce Catholic scholarship, not Protestant or secular. And they wanted it in Washington to wave the Catholic flag as a sign of patriotism in the nation's capital.

What does the church need today? And how can the Catholic Church best serve the country through the means of a university owned by its bishops?

Today, the dominant fact about the Catholic Church in the United States is that it is becoming increasingly Latino in its membership. And the dominant fact about the intersection of the church with the ambient culture is that we Catholics are ahead of the demographic curve: The culture, as a whole, is becoming increasingly Latino, just not as fast as the Catholic Church is. Asian Catholics, also, are playing an increasingly significant role in many local churches.

The fact that the end of the 19th and the beginning of the 21st century both witness a Catholic Church dominated by concerns related to migration is interesting, but we should be wary of false equivalencies. The progressive leaders of the church in the 1880s wanted the immigrants to assimilate to American ways, and assimilate as thoroughly and as quickly as possible. They could not conceive that their flock might lose its faith, or at least see that faith weakened, as it entered the ambient culture. They did not recognize the ways in which a Protestant ethic and spirituality would work its way into the ethnic churches they led.

They also shared the naive and uncritical optimism of their age about the virtues of American values that we associate with Gibbons' friend Teddy Roosevelt. It would be wrong to say they were racists, but the bishops who founded Catholic University were 19th-century white men, with all the limits of perspective that designation implies.

I have said it before and will say it again: Latinos are God's great gift to the Catholic Church in this country because without them, we would be in danger of becoming an upper-middle-class club for people with conservative sexual ethics. But if that gift is to be received, the last thing we want is for the Latino immigrants to undertake a thoroughgoing assimilation.

We need them to hold on to their family-centered culture, their sense of God's transcendent presence in the quotidian, their resistance to reducing religion to ethics, and, perhaps most of all, their belief in a God who wants his people to celebrate and who accompanies them not only in their joys and their sorrows, but who accompanies them to the fiesta, too. It is the Latinos who have the cultural resources to resist the incursion of the market and its methods into every facet of society and culture, a resistance we Anglos never really mounted in any meaningful, still less successful, way.

It is the dirty secret of American life today — and the current occupant of the White House won't tell you so — that we Gringos need the Latinos more than they need us. Yes, society in some countries like Honduras is ridden with violence, and most of the nations south of the Rio Grande experience poverty in ways we can scarcely imagine. But they have not made the rest of the world pay for their dysfunction as we do, polluting the atmosphere and the oceans at a per capita rate that is gross in both the mathematical and moral sense of the word.

The bishops should begin remaking Catholic University with the goal that in 10 years, it is a center for preserving Latino cultural vitality in the context of life in U.S. society, with all the nuanced changes such vitality will demand. And, just so, they will be doing a great deal to strengthen the church.

The school should seek to hire the leading historians of Latino society and especially of Latino religious history. They should seek the best scholars of Latino literature and music and architecture. Their politics department should become a powerhouse for studying Latin America and the law school should focus on the two areas Latino immigrants most need: immigration and labor law.

The business school should exile all its libertarians and hire economists devoted to fashioning a different economic model, one that sheds some of the endemic cronyism of too many economies in Latin America, but one that also recognizes the clear and obvious limits that any putative free market yields for valuing family life and the common good the way Latino culture does and U.S. culture doesn't. 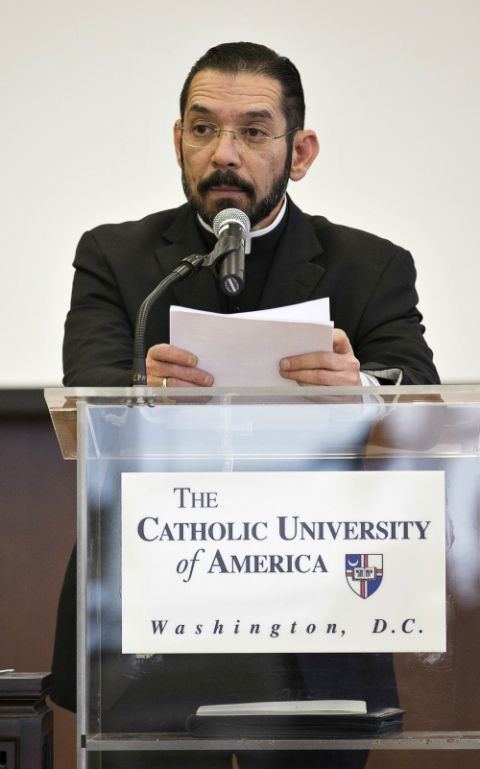 Bishop Daniel Flores of Brownsville, Texas, delivers a lecture on immigration on the campus of the Catholic University of America in Washington in 2015. (CNS/Tyler Orsburn)

Catholic University's theology department should poach experts in the theology of the people and other varieties of Latino theology, discerning how they can, and can't, be applied in the U.S. context.

As a kind of exclamation point on this project, the bishops should fire the current leadership and return to the earlier practice of having a bishop serve as rector of the university. And that bishop should be Bishop Daniel Flores of Brownsville, Texas, who is clearly one of the leading intellectual lights among the U.S. bishops. Flores is the only U.S. bishop I know, Latino or otherwise, who can discuss literature and fiction as easily as he can discuss the philosophy of Jacques Maritain or the theology of Henri de Lubac. (Curiously, the only other bishop I know of whom this can be said is also Latino, but is no longer serving in the States: Bishop Alvaro Corrada del Rio, formerly of Tyler, Texas and now of Mayagüez, Puerto Rico. At several dinners with a group of bishops, I would bring up a book, and he would give an exquisite and incisive five-minute summation and critique of the work and what he thought was the next book the author should write!)

Flores' time as bishop of one of the poorest dioceses in the country would surely make him suspicious of the capitalist self-congratulation that currently enthralls the university's leadership. The selection of one of their own would demonstrate as nothing else could the bishops' commitment to keeping Catholic University going and, by choosing one of their leading Latino colleagues, their commitment to the project I have outlined above.

Will it happen? I doubt it. Our bishops are more managerial and custodial in their outlook than visionary. To a number, they avoid conflict, and removing a university president and provost entails a lot of conflict. But I say to the bishops here and now — and will repeat it as needed — don't come to me when this mess explodes in your face and expect me to decline to say, "I told you so." Monday, I explained why the situation at Catholic University is so bad, drastic action is necessary. Recognizing you can't replace something with nothing, today I have offered a different path forward.

Between now and the explosion, remember this: You would not tolerate one of the nation's leading theologians, and finest, toughest professors, Fr. Charles Curran, because he said Humanae Vitae was a close call and he thought the pope got it wrong, but you now tolerate a business school that actively undermines the entire social doctrine of the church. If you are comfortable with that, then you deserve to face the consequences of the explosion, or implosion, when it comes. Pity the poor students who will see their dreams intermingled with your negligence.