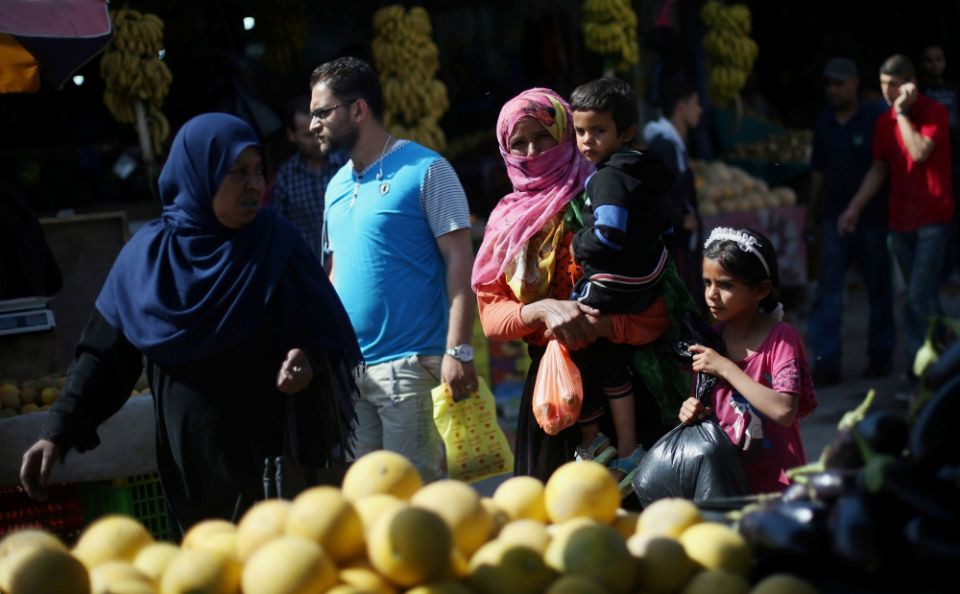 Palestinians shop at a market in the central Gaza Strip May 17. (CNS/Reuters/Ibraheem Abu Mustafa)

At Politico, why Democrats should not be counting their chickens so fast: The GOP has already deployed an army of field staff to key districts. They are aiming to keep the higher-than-expected voter turnout that propelled Donald Trump to victory engaged and voting Republican. Barack Obama was not able to translate his own popularity into coattails his party could ride to victory. But the fact that Republicans have already concluded that mindless TV ads have no effect shows at least someone at their HQ is thinking. Are we sure the same can be said of the Democrats?

My nomination for most ridiculous piece of propaganda this year? Charlie Kirk's Hill op-ed on Puerto Rico in which he alleges that Gov. Ricardo Rosselló has taken a turn to the left that is somehow responsible for the increase in violence on the island. I hope Kirk is actually getting paid by the hedge funds for spreading this nonsense. If he truly believes it? Scary.

Speaking of scary: Watch Alabama Congressman Mo Brooks suggest that rocks falling into the ocean are one reason sea levels are rising. The witness at the hearing, Phil Duffy, is CEO of the Woods Hole Research Center and will be holding a press conference tomorrow with America's favorite friar, Boston Cardinal Sean O'Malley. Stay tuned.

At America, an interview with Catholic Relief Services official John Byrne includes this observation: "Mr. Byrne describes a populace so frustrated by the Israeli occupation and chronic suffering on the Gaza Strip that many have told him that death at the border was a sacrifice they were willing to make." Can you spot the problem with this diagnosis? That's right — there is no Israeli occupation in Gaza and has not been since 2005. Once again, a well-intentioned Westerner refuses to hold the Palestinians accountable for their own failures.

I suppose I can't let the royal wedding go by without comment. It was fun to watch the royal family squirm during Bishop Michael Curry's fiery sermon, fun and also disquieting. At least the "defender of the faith" and head of the church did not smirk, but the rest of the royals embarrassed themselves. I am deeply opposed to the introduction of secular music into a religious liturgy and while the performance of "Stand by Me" was splendid, it was misplaced in the chapel and should have been at the reception. If the couple had wished to introduce an American element into the musical program, they should have tapped Kathleen Battle to sing the processional, Handel's "Eternal source of love divine." Handel arias are astonishingly exposed and difficult, and the singer, Elin Manahan Thomas, was flat at times and thin throughout. Here is a recording of Battle singing the glorious music as it should be sung, paired with Wynton Marsalis.