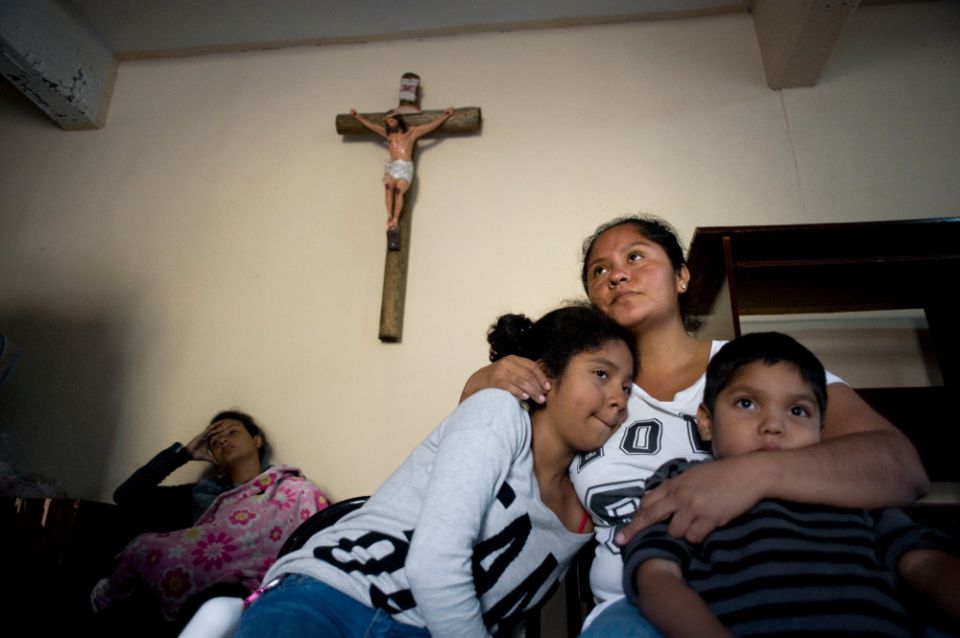 A mother and her two children rest at a Catholic migrant shelter supported by Caritas in Tijuana, Mexico, April 23. (CNS/David Maung)

Our friends at Commonweal have posted the equivalent of a symposium on Catholic political thought, beginning with the text of San Diego Bishop Robert McElroy's extraordinary Bernardin lecture in Chicago last month, and three responses, all critical in the best sense of the word, from some of Catholicism's leading minds: Cathleen Kaveny, John McGreevey and Matthew Sitman. These essays should be required reading for U.S. bishops as they consider how to refashion their quadrennial document "Faithful Citizenship" in light of the magisteriums of Pope Benedict XVI and Pope Francis and the politics of you know who in the White House.

At Catholic World Report, Sam Gregg, the research director of the Acton Institute, comments on the new Vatican document on economics and finance. The problem with Gregg's analysis is this: The text plainly closes the window on the possibility of baptizing the kind of libertarian, laissez-faire economic policies Gregg advocates and further illustrates that this window was never really open in the first place. In an Orwellian twist, Gregg simply claims there is no conflict, but he still does not admit that there is a need for non-market regulation of the market and he also fails to recognize the degree to which he posits the relationship of morals to economics as an extrinsic one. The new document, following especially on the magisterium of Benedict XVI, insists the relationship must be intrinsic.

At The Guardian, a fine editorial on Francis' apology for his own mishandling of the Chilean situation, set in the historical context of a papacy that less 150 years ago was celebrating the definition of papal infallibility.

At Politico, Republicans in the House wrestle with how to deal with the issue of immigration. There has long been a majority in the House to support immigration reform. But the so-called "Hastert Rule" — which is not a rule of the House, but a self-imposed rule of GOP politics — stipulates that you only bring a bill to the floor when it has a majority of the majority behind it. Thus, the extremists within the GOP prevented former House Speaker John Boehner and House Speaker Paul Ryan from doing the right thing on immigration. If Ryan thinks more about meeting his Maker and less about party cohesion, he will get out of the way and allow a bipartisan solution, now far short of the comprehensive bill that could have passed a few years back, to advance to a floor vote.

Speaking of immigration, here is video of Sr. Norma Pimentel, a member of the Missionaries of Jesus, receiving the Laetare award at last weekend's commencement exercises at the University of Notre Dame, and her splendid speech to the students. (h/t Rocco)

Amy McGrath won the Democratic primary in Kentucky's 6th Congressional district Tuesday night. You may recall this profile of her candidacy at Bloomberg in which she asserted the fact that she is pro-choice, but also her reluctance to become a vehicle for the Emily's List money machine and ideological agenda. "I don't want to be tied to a litmus test," McGrath said. "I don't want to be tied to any national interest like that, where people can say, you're just a puppet." With such a person we can do business even though we disagree on the underlying issue. And, the rest of her approach, especially her defense of government, is a welcome and necessary example of how Democrats can change the narrative that shapes our elections.

At America magazine, a fine essay on how the pro-life movement turns off people it should and could attract. A friend noted that the pro-life movement is more diverse than the author, Christina Gebel, allows. But still, who can deny she is right that the loudest voices are from those who unwittingly repel those they might profitably attract. And, I think having nurses and social workers out front in this discussion is much better than having prelates and theologians.

A colleague expressed delight — "astonishingly beautiful" — in the performance of "Eternal source of light divine" to which I linked on Tuesday by Kathleen Battle and Wynton Marsalis. Others may wish to join me in the conviction that God created Battle's voice specifically to sing the Handel repertoire as it should be sung. Her voice is small — you would not want to attend a performance of "Aida" at the Baths of Caracalla with her singing the title role — but it is so exquisitely and delicately used and she performs these exposed Handel pieces as no one else. Here is another aria, perhaps my favorite, "O Sleep, why dost thou leave me?" from "Semele."

The modulations that begin around the 1:39 minute mark are simply the most beautiful sounds I have ever heard from the human voice. If I knew the world was to end in 30 minutes, and I was at peace with my God and had only to choose what music I would like to accompany me across the abyss, this would be the last thing I would like to hear.

A Lenten commitment to immigration reform