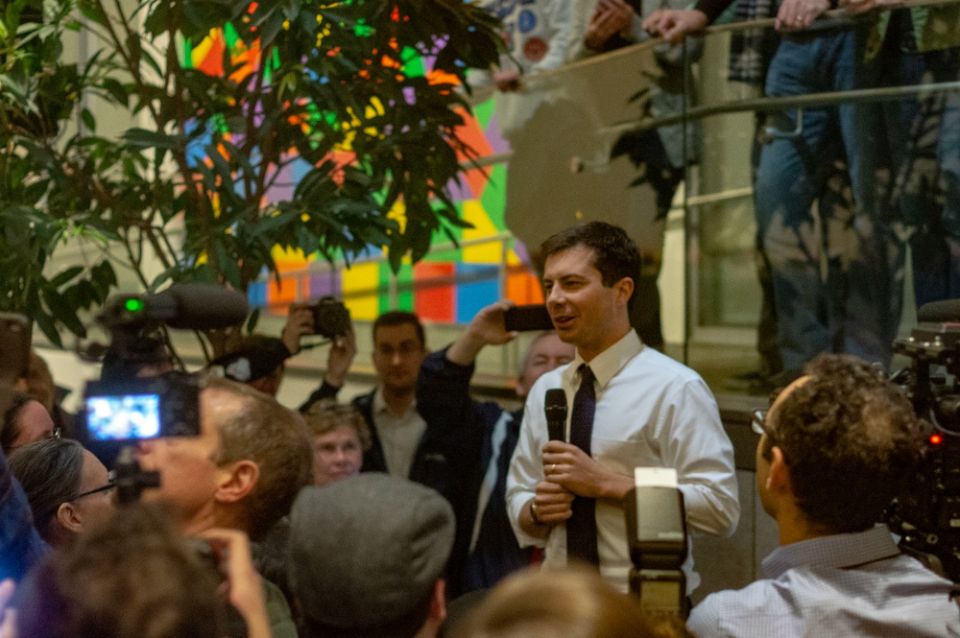 The sudden ascent of Mayor Pete Buttigieg onto the presidential primary podium — he is currently in bronze medal position, trailing only former Vice President Joe Biden and Sen. Bernie Sanders — is confounding in some ways. He is only 37 years old, he is openly gay, he has held no office more important than mayor of a midsized Midwestern city.

But Buttigieg also epitomizes the cultural zeitgeist: He is only 37 years old, he is openly gay, and he has held no office more important than mayor of a midsized Midwestern city. Mayor Pete is, in short, this year's Rorschach test candidate: People see what they want to see.

Americans have always harbored a strange, and to me inexplicable, admiration for youth. We are, as these things go, a young country, and we proudly contrasted ourselves with "the old country" from which our ancestors came. The frontier that defined the first three centuries of European colonization, and still shapes the national psyche, was a young person's terrain, a place where a person could start fresh, create a new landscape, build a new homestead. Even in my lifetime, the fascination with frontiers found expression in the rhetoric, and the space program, of John F. Kennedy, whose youth was central to his candidacy.

Set against this backdrop, it should not surprise that Buttigieg has burst like forsythia in spring, shuffling last year's fresh new face, Beto O'Rourke, to the political sidelines. At age 37, Buttigieg contrasts easily with his older fellow candidates: Bernie Sanders, 77, Joe Biden, 76, and Elizabeth Warren, 69. Voters "want that new car smell," President Barack Obama famously said, and he is usually right, although I suspect many voters are looking for the sense of stability age connotes after the roller coaster that has been the Trump administration.

Being gay has, in liberal circles, long since ceased to be an impediment. Indeed, more often than not, it is a bonus. Does anyone think Buttigieg would have risen so quickly if he were straight? Being gay is now seen as cool on the left and, what is more, those for whom being gay is an enormous difficulty are not likely to be Democratic primary voters.

Buttigieg balances his gayness with the fact that he has been quite open about how he struggled with being gay for many years. "When I was younger, I would have done anything to not be gay," he told an audience at a fundraiser. As late as when he was 25 years old, he said, "if you had offered me a pill to make me straight, I would have swallowed it before you had time to give me a sip of water. ... There were times in my life that, if you had shown me exactly what it was inside me that made me gay, I would have cut it out with a knife."

It is difficult not to be moved by such self-disclosure and if there are moderate voters, especially older voters, for whom being gay is not cool, and more puzzling, this is the kind of thing that reassures them.

Buttigieg's being gay has also allowed him to do something most Democratic candidates would not dream of doing: publicly call for a religious revival! It is a classic role reversal and it brings to my mind the birth of the gay rights movement.

At Stonewall, New York City police raided a gay bar, arresting a few people but letting most of the clientele go. Instead of dispersing, the gay clientele surrounded the club and when no police backup arrived, and passersby stopped to see what was going on, the police found the tables turned: They were the ones holed up in the gay bar, surrounded by an ever-growing crowd of angry gay men and transvestites.

Something similar has happened with Buttigieg's candidacy: After months of articles and polling indicated that the Democratic Party was increasingly secular, divorced from, and even disdainful of, certain Christian values that had historically informed American politics, in February it was Buttigieg, the gay guy, who called for a resurgent "religious left" to balance the religious right. Would people have applauded such a call if Buttigieg were straight? I doubt it.

There is one other aspect of the mayor's being gay that might help propel his candidacy: It blesses him with really awful enemies. Michael Brown headlined a column he wrote at Stream: "When a Homosexual Episcopalian Calls Trump's Christianity 'Hypocritical.' " I am dying to know if Brown is more disgusted with Buttigieg's homosexuality or with his being an Episcopalian? Every successful politician is lucky to have dreadful enemies — think Bill Clinton and Newt Gingrich — and for a Democrat, nothing is better than being attacked by bigots.

I have long thought that having a candidate who had been a mayor at some point in their career would be a good thing. Mayors have to get stuff done and they acquire a bipartisan aura given the nature of their job: Potholes need to be filled on streets where both Democrats and Republicans live. But having a mayoralty on one's résumé is a good thing, not a sufficient thing.

In addition to being smart, we want a president who has had to cope with a variety of life experiences and a wide diversity of political personalities. Buttigieg may have learned some good lessons as mayor that would serve him well as president, but some of those lessons might be parochial and misleading when applied beyond South Bend, Indiana.

It is easy to forget that Buttigieg does not have more experience. His on-air presence is among the best in the business but that has to do mostly with something he lacks: He has decades fewer years of media training and tries to actually answer the question he is asked. How quaint!

While more experienced pols slide easily into talking points, they do not realize that their repetition of rote lines creates the impression that they are insincere. Sen. Kamala Harris' repeated dodge of tough questions by saying we need a "conversation" about it did not win her any adherents. It was Donald Trump's genius to understand he could tell lie after lie, so long as he sounded authentic.

Buttigieg sounds authentic too, and he is smart enough to pull off answering questions as they come. So are the other candidates and they should fire their media trainers.

So, with all this upside, what is the downside? Tune in tomorrow.