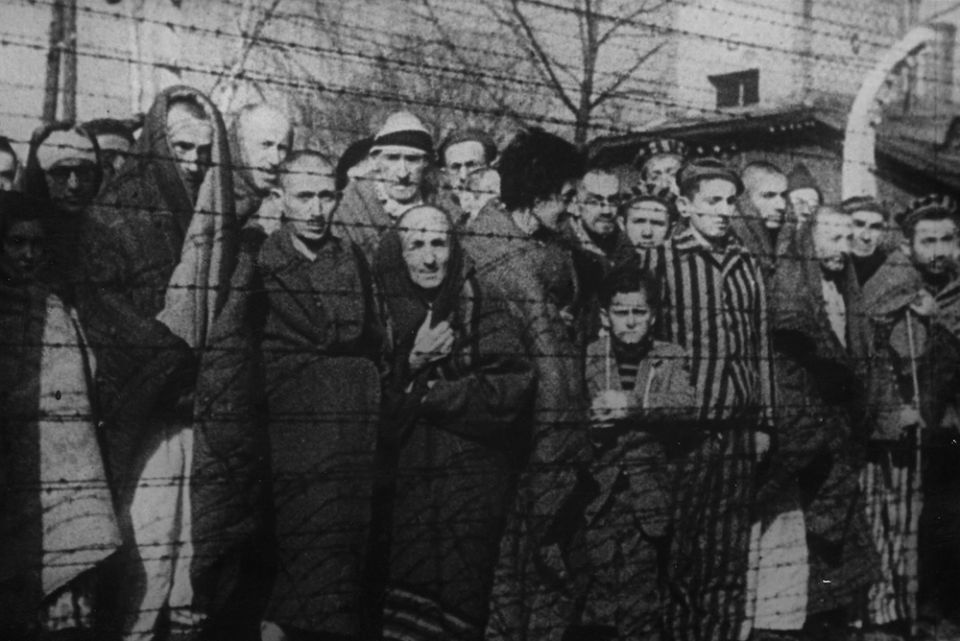 Men, women and children are seen behind barbed wire after the liberation of the Nazi death camp Auschwitz-Birkenau in 1945 in Oswiecim, Poland. (CNS/Reuters/Yad Vashem Archives)

There are many things in our culture in the United States that are dangerous: Our habit for narcotics, which has the added side effect of wrecking several countries south of the border due to drug cartels; the consumerization of everything from Christmas to romance; gross income inequality and a consequent rise in nationalistic xenophobia, because Americans and capitalism are never to blame for our own ills. The list goes on.

But one of the most dangerous attributes of our culture is our penchant for selective memory, and that selectivity has been on full display in recent days. The remembrance of the Shoah is a most critical act of culture, not least because the survivors are now dying off as was evident in the Jan. 27 commemoration of the liberation of Auschwitz. Without firsthand witnesses, you can bet that Holocaust denial will only grow, and a new branch of the evil tree of anti-Semitism will bear new poisonous fruit.

The motto "never again" is in the headlines and on the lips of our politicians and pundits. Except we have to forget much of the history of the last 70 years to utter those words without shame.

When Gen. Ratko Mladic's troops perpetrated the massacre at Srebrenica, when year after year, the shelling of Sarajevo continued with diplomatic protests but nothing more from the West, we in the West witnessed genocide and we did nothing for far too long. NATO said it was up to the European Union to step in, and the European Union looked to NATO, no one noting that the countries in the EU largely are the same ones in NATO. The United Nations sent peacekeepers, but they stood aside when Mladic ordered them away. Ethnic cleansing was conducted on all sides. Never again.

In Rwanda, the slaughter was even worse. Estimates vary between half a million to 1 million killed, and not by snipers in the hills above a city, not even with automatic rifles in front of a mass grave. Many, perhaps most, were killed by machetes. The killers could look their victims in the eyes, hear their screams, watch the horror on their faces as they killed their children. Women were raped and then killed. President Bill Clinton said his biggest regret is that he did not do more to stop the slaughter, but claimed he did not know its extent. That was a more consequential lie than his claim that he "did not have sexual relations with that woman." Never again.

As I write, more than a million Uighur Muslims in China have been rounded into concentration camps in what is at least a cultural genocide. You can bet our president and his aides did not raise their plight during trade negotiations with the Communist government of that country. You can bet the international community will turn a blind eye when the Winter Olympics open in Beijing in two years. Never again.

There is debate as to whether or not the mass killings in Bangladesh, Cambodia and Guatemala constituted genocide. What distinguishes genocide is not the numbers but the intent: The first Jew killed by the Nazis as well as the 6 millionth were both victims of genocide, and Jews were not killed because of any political rationale. Jews whose talents were valuable to the regime were still exterminated.

In the cases of Bangladesh, Cambodia and Guatemala, political violence intermingled with racial and ethnic violence. People of the same religion or race or nationality killed others of the same religion or race or nationality because they stood in the way of a desired political outcome — or so the argument goes for not classifying them as genocides in the strict definition of the term. For example, the killings in Cambodia were on a massive scale, but they appear to have been an extension of the Cultural Revolution in that country more than an attempt to exterminate a race of people. If these incidents were not genocide, however, they were beyond doubt mass murders, and our moral sensibilities should be as offended by political mass murder as by genocide per se. Never again.

However hollow the chant, there are other reasons to pay moral and intellectual attention to the anniversary of the liberation of Auschwitz. Some of the survivors of the death camp noted the rise of anti-Semitism around the globe. Here in the United States, there has been an increase in the number of anti-Semitic incidents although it is less clear if there has been a rise in anti-Semitism. Either way, we should be worried: If there are not more anti-Semites today than previously, but they now feel more inclined to exhibit their hatred in acts of violence, the times are still dangerous for Jews.

Rabbi Jonathan Sacks, the former chief rabbi of the U.K., addressed the rise of anti-Semitism in the Labour Party last year. Among other things, he said: "The hate that begins with Jews never ends with Jews." I deprecate the rabbi's remark. Hatred of Jews is morally despicable even if it does end with Jews.

The U.K.'s Labour Party is not the only segment of the political left where anti-Semitism has raised its ugly head. Under the guise of legitimate criticism of policies undertaken by the Israeli government, politicians on the American left sometimes traffic in anti-Semitic tropes or in historical fictions. If you suspect American Jews of dual loyalty, you are trafficking in an anti-Semitic trope, and it's a trope that has been frequently hurled at Catholics, too. If you rewrite the history of the State of Israel to consider victory in a war you did not start a morally suspect accomplishment, if you neglect the population statistics for the region at the time of the first and second Aliya, or if you overlook the expulsion of Jews from Arab lands after the founding of Israel, you are trafficking in anti-Semitism. Given the long and unique tenacity of anti-Semitism in Western culture, people who criticize Israel need to be careful not to cross the line.

History often seems like one long catalogue of crime, yet no crime stands out like the Shoah. In the heart of the most civilized of societies, the murder of the Jews was carried out, and not just by "the Nazis," but by thousands of German and Polish and Ukrainian grandpas and grandmas, and not a few members of the clergy as well. The U.S. government refused to bomb the railway lines leading to the camps. Vichy kept the flame of collaboration alive, passing the torch of anti-Semitism in France to Jean-Marie Le Pen and his horrible daughter Marine that they may carry it down to our own day. The most evil recessive gene in Western, Christian culture is anti-Semitism, and its apotheosis was the Shoah.

The Shoah places a moral claim on us all. The Jews know this and act upon it. At the protests I attended in the 1990s, urging the U.S. government to intervene in Bosnia, the most prominent group attending was always the Jews. In a part of the world where the rule of law is recognized mostly in the breach, the only Arab citizens with any hope of a fair trial are the Arab citizens of Israel. Despite the attempts of President Donald Trump to curry favor with American Jews by endorsing every wrong-headed policy Prime Minister Bibi Netanyahu can devise, American Jews remain at the forefront of the fight against Trump's brand of ethnic nationalism.

The Catholic Church has come a long way. First, there was the example of the former nuncio Angelo Roncalli, late Pope John XXIII, offering baptismal certificates to Jews during the war. Then came Nostra Aetate, the seminal declaration of the Second Vatican Council that repudiated anti-Semitism once and for all. Pope St. John Paul II has much to answer for on account of his mishandling of clergy sex abuse, but the image of him entering the Grand Synagogue in Rome, traveling to Jerusalem and praying at the Western Wall, ordering the nuns to abandon their convent at Auschwitz, these acts will speak in his favor as history begins to form a judgment of his pontificate. Indeed, the fact that two successive popes, one from Poland and one from Germany, did so much to advance the cause of Jewish-Catholic relations is a remarkable and grace-filled fact. Pope Francis has carried on that noble effort.

But only a fool would not worry about the direction of Western culture, and there is no greater flashing yellow light greater than the rise of anti-Semitism and the failure to learn the lessons of the Shoah. Poor humanity! It is not true that history repeats itself. History is the one thing that does not repeat itself. But we repeat the errors that flow from the hatreds in our hearts. Never again? Regrettably, it is a slogan that is by now impossible to believe.

Nationalism, corruption and finding a better way in the news cycle