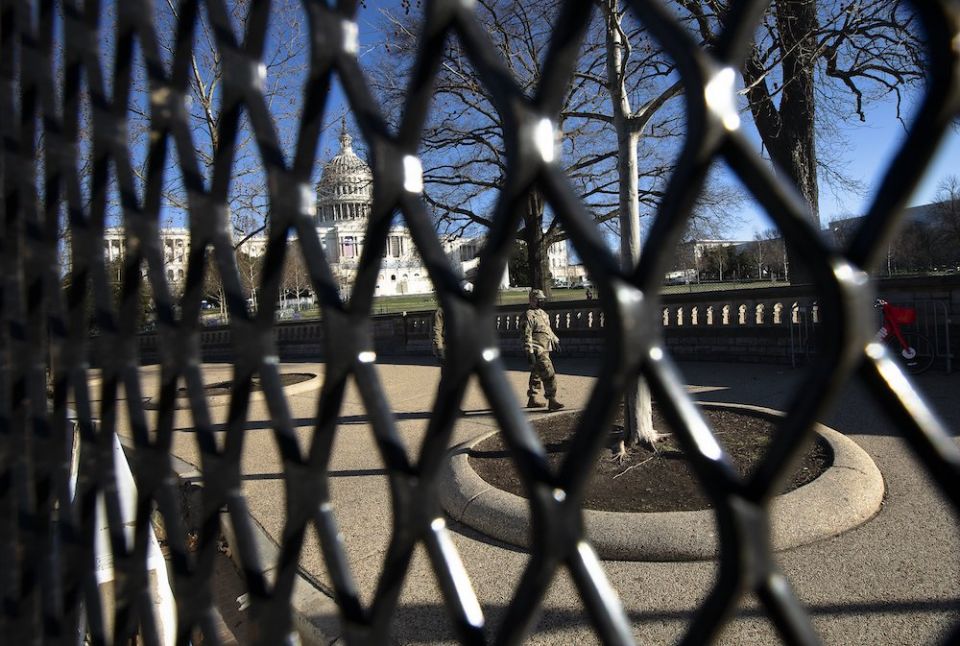 National Guard troops are seen on patrol at the U.S. Capitol in Washington Jan. 9, 2021. (CNS/Tyler Orsburn)

She did it. Peggy Noonan brought up the Nazis in a column about President Donald Trump. In The Wall Street Journal, Noonan wrote:

There have been leaders before who, facing imminent downfall, decide to tear everything down with them. They want to go out surrounded by flames. Hitler, at the end, wanted to blow up Germany, its buildings and bridges. His people had let him down. Now he hated them. They must suffer.

I have resisted Nazi comparisons for five years, for the most part easily. But that is like what is happening here, the same kind of spirit, as the president departs, as he angrily channel-surfs in his bunker.

It is an unwritten rule of journalism: No Nazi comparisons. Noonan broke the rule. She was right to do so.

Then former California Gov. Arnold Schwarzenegger did it too, in a video message (text here) that was made all the more powerful because of his personal recollections and his thick German accent:

I grew up in Austria. I'm very aware of Kristallnacht, or the Night of Broken Glass. It was a night of rampage against the Jews carried out in 1938 by the Nazi equivalent of the Proud Boys.

Wednesday was the Day of Broken Glass right here in the United States. The broken glass was in the windows of the United States Capitol. But the mob did not just shatter the windows of the Capitol. They shattered the ideals we took for granted. They did not just break down the doors of the building that housed American democracy. They trampled the very principles on which our country was founded.

It was a powerful speech, and I could almost forgive him for paving the road from media stardom to politics, a path that should be obliterated.

The Nazi analogies are understandable even if, like all analogies, they are inexact. Mob rule is mob rule in any language, and the frenzied mob that assaulted the Capitol included many racists and anti-Semites. I look forward to seeing the man who wore the "Camp Auschwitz" sweatshirt testify before Congress or explain himself at a trial. I want all Americans to recognize the ideas and attributes of those who found Trump so appealing that they would try and subvert our democracy for him.

I had my own Nazi analogy that I have been wondering about using. I watched the pathetic performance of Sens. Ted Cruz and Josh Hawley last week, pretending that a congressional commission on election fraud would persuade the doubters about the election result, after more than 50 court cases had failed to do so.

What they were really doing was positioning themselves to be Trump's heir and they put me in mind of Admiral Karl Dönitz. After Hitler committed suicide, Dönitz was proclaimed the führer but, of course, he was not the führer. He was head of the German state, or what was left of it, for a little more than a week before V-E Day. You can't pass on to one's political heirs those perverse political gifts that turn one into the object of a cult of personality.

Most Nazi analogies fail because the evil of that regime was unique in human history. Oppression of peoples can be found in every century and continent, but most tyrants and most fascists put those they despised into some version of slavery. Hitler valued extermination even when it harmed his own war effort and hastened the end of his regime. There was a purity to his evil that remains unmatched.

Additionally, as Robert Paxton explained in his brilliant book The Anatomy of Fascism, "each individual national fascist movement gives full expression to its own cultural particularism. Fascism, unlike the other 'isms,' is not for export: each movement jealously guards its own recipe for national revival, and fascist leaders seem to feel little or no kinship with the foreign cousins."

I have commented before that if we are to invoke the mantle of fascism for Trump, it is Mussolini, not Hitler, who serves as the model. As I was watching the president last Wednesday address the crowd before it stormed the Capitol, the comparison was especially obvious as Trump displayed many of the same mannerisms, the way he steps away from the microphone to allow the applause to build, the cadences of speech, the self-confidence expressed by his puffed-out chest, the casual incitements to violence. A friend called to make sure I was watching. "Yes," I said. "I wish the cameras would pull back so we could see if Trump is at the White House or the Piazza Venezia."

The Italian army was not very adept at war, and so we tend to see Mussolini as a clownish figure, someone whom Hitler had to constantly rescue from his foibles. Churchill, as early as 1941, when addressing the Canadian parliament, referenced "the Mussolini flop." But Il Duce was capable of great evil. Hundreds of thousands were killed in Ethiopia by his troops, including several thousand civilians during the extra-judicial reprisal known as the Yekatit 12 massacre. His troops used mustard gas as well. Mussolini was also not averse to murdering political rivals, including his own son-in-law.

We do not know — and God willing will never be forced to find out — the lengths to which Donald Trump would have gone to preserve his power. In the weeks ahead, the degree of his complicity with the violence will be made known, and I suspect there will be plenty to shock us, as we were shocked to watch the violence unfold last week.

Now, as then, we can be shocked but not surprised. Did people think his repeated invocations of the Second Amendment had to do with principled constitutionalism? Can anyone doubt that there is a side of Trump's personality that really does admire the Proud Boys and other fascists who were among the mob last week, and admires them specifically because of their willingness to commit violence?

Sometime today, the House of Representatives will vote to impeach the president. There is insufficient time to try him in the Senate, but it is important that the House speak for the nation in deeming Trump's incitements criminal. Trials of many of those who assaulted the Capitol will ensue, and congressional hearings will be held.

It is important that the nation witness a thorough investigation into the flirtation with fascism we have just experienced. The boil on our democracy must be lanced with all the majesty and justice of which our democracy is capable. We will know we are returning to normalcy and decency when we no longer have to ask ourselves if it is appropriate to use a Nazi analogy.

Column | Reckoning with our national flirtation with fascism

Lessons from watching the Jan. 6 committee while traveling abroad