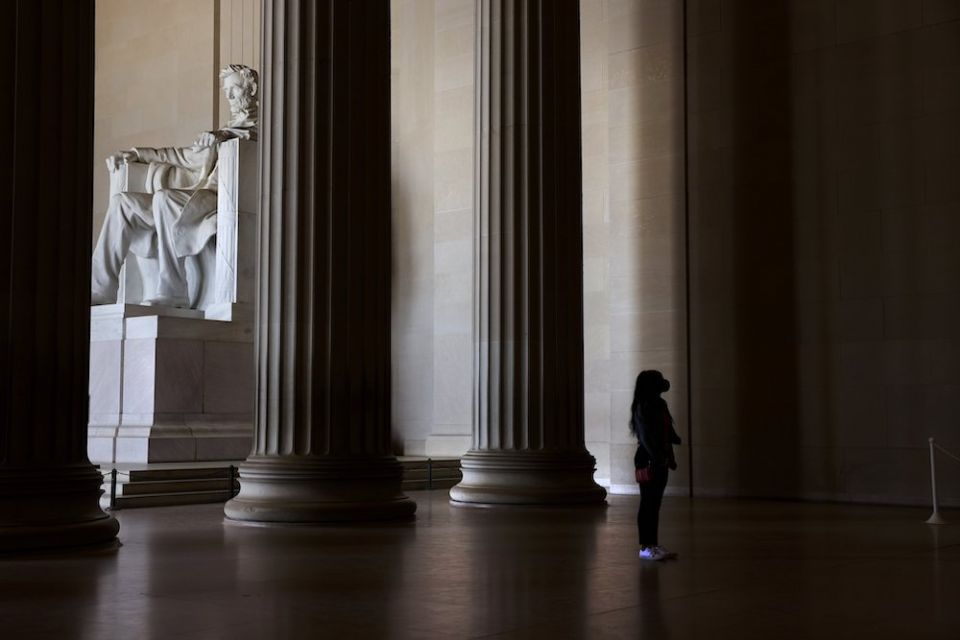 A visitor in the Lincoln Memorial in Washington April 21, 2021 (CNS/Reuters/Evelyn Hockstein)

Memorial Day began shortly after the Civil War. It was originally known as Decoration Day, and there is some debate about whether the first such commemoration of war dead was mounted by formerly enslaved persons in Charleston, South Carolina, or in Waterloo, New York. From then until now, it is a day when we pause, as a nation, to pay tribute to those who gave the ultimate sacrifice on behalf of the nation.

The Civil War was the last time the nation faced a serious internal threat to democracy. There have been foreign wars, hot and cold, that threatened the nation and our way of life. There were moments such as the Watergate scandal when it was not clear if the Constitution would weather the storm of official corruption that was being unearthed. The fear inspired by Sen. Joseph McCarthy's witch hunts destroyed many lives. The instances in which our country has fallen short of its luminous ideals or even basic standards of justice, especially where race is concerned, are too many to count.

Still, the Civil War represented a fundamentally different kind of threat, not least because war brings its own special horrors. In the mid-19th century, the technology of war had outrun the technology of medicine, and so the Civil War was almost unimaginably gruesome. Some 620,000 soldiers were killed, about 2% of the population. If that percentage had been killed by, say, the coronavirus today, more than 6 million people would have died in the past year from the virus.

What is more, fratricide is especially morally repugnant, a unique kind of human failing. The Civil War was a war over what kind of nation we would be. It was a war about whether or not the country would live up to its ideals, whether, in Lincoln's famous words, "this nation, under God, shall have a new birth of freedom — and that government of the people, by the people, for the people, shall not perish from the earth."

The nation did not fully achieve that "new birth of freedom," but we continue, however haltingly, to strive for it. Each generation faces new challenges, but none have been forced to confront the kind of internal, existential threat to democracy that Lincoln and the men and women of his day confronted.

We witnessed the attack on the Capitol on Jan. 6. We watched the mob come within seconds of reaching Vice President Mike Pence, whom they had been shouting they hoped to lynch. We saw the Capitol Police being beaten and, later, watched the somber funeral of Officer Brian Sicknick. Last week, his mother lobbied the same members of Congress her son died defending, imploring them to agree to a bipartisan investigation into the events of that horrible day.

In recent weeks, we have watched the insanity surrounding the "recount" in Maricopa County, Arizona. Bamboo fibers, anyone? The crazy conspiracy theories would be good for a laugh if their application affected only the making of taffy or floral arrangements. Some Republicans have not been deterred by the nuttiness and are seeking to mount similar "recounts" in other states.

In the aftermath of last November's election, President Donald Trump implored Georgia's Secretary of State Brad Raffensperger to find an additional 11,780 votes for him, one more than the margin by which Joe Biden won the Peach State. To his great credit, Raffensperger refused to try and overturn the will of the voters. Now, Trump loyalists are seeking to run for key offices like Secretary of State, which would allow them to do what Raffensperger did not do. 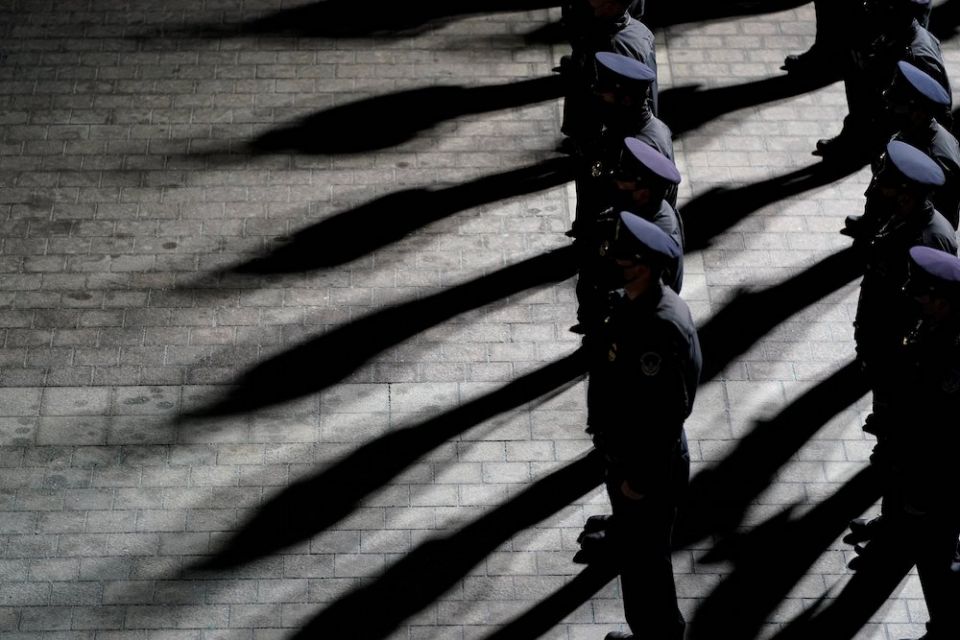 U.S. Capitol Police officers stand at attention as an urn with the cremated remains of fellow officer Brian Sicknick arrives to the Rotunda at the U.S Capitol in Washington Feb. 2, 2021. Sicknick died from injuries Jan. 7 after defending the building from insurrectionists the previous day. (CNS/Reuters/Alex Brandon)

Paul Krugman recently penned an essay entitled, "The Banality of Democratic Collapse." I do not agree entirely with his theory that Republicans have been knowingly telling lies for so long that the threat posed by Trump now was a difference of degree, not kind. I think all politicians tend to believe their own propaganda and find ways to rationalize their shift to ever more extreme ideas, whether that be the efficacy of trickle-down economics or the lack of moral challenge posed by late-term abortion. Still, there is no denying that only one party in the U.S. that is determinedly attempting to subvert democracy.

(N.B. I was recently sent a note by an esteemed historian, reminding me that there are still fine public servants among the ranks of the catch-all word "politicians," and so there are. Just not enough of them.)

What Krugman is absolutely correct about is that the problem is not merely the extremists but the careerists who are too afraid to challenge the extremists:

What's different this time is the acquiescence of Republican elites. The Big Lie about the election didn't well up from the grass roots — it was promoted from above, initially by Trump himself, but what's crucial is that almost no prominent Republican politicians have been willing to contradict his claims and many have rushed to back them up. Or to put it another way, the fundamental problem lies less with the crazies than with the careerists; not with the madness of Marjorie Taylor Greene, but with the spinelessness of Kevin McCarthy.

U.S. Rep. Liz Cheney, Sen. Mitt Romney and a few others have shown some spine and some patriotism. I was glad to see former Speaker of the House Paul Ryan criticize Trump last week, even if he could not bring himself to mention the former president's name.

Today, on Memorial Day, people throughout the country will remember those who gave their lives to preserve America's democracy when it was threatened by slavery and secession and who have given their lives to meet all manner of mortal threat since.

This year, in a way that was not even conceivable while Trump was president, our democracy is threatened with collapse. And the banality of it all is frightening.

Column | Remembering those who sacrificed at a time of national peril