Viganò and the third secret of Fatima: What could go wrong? 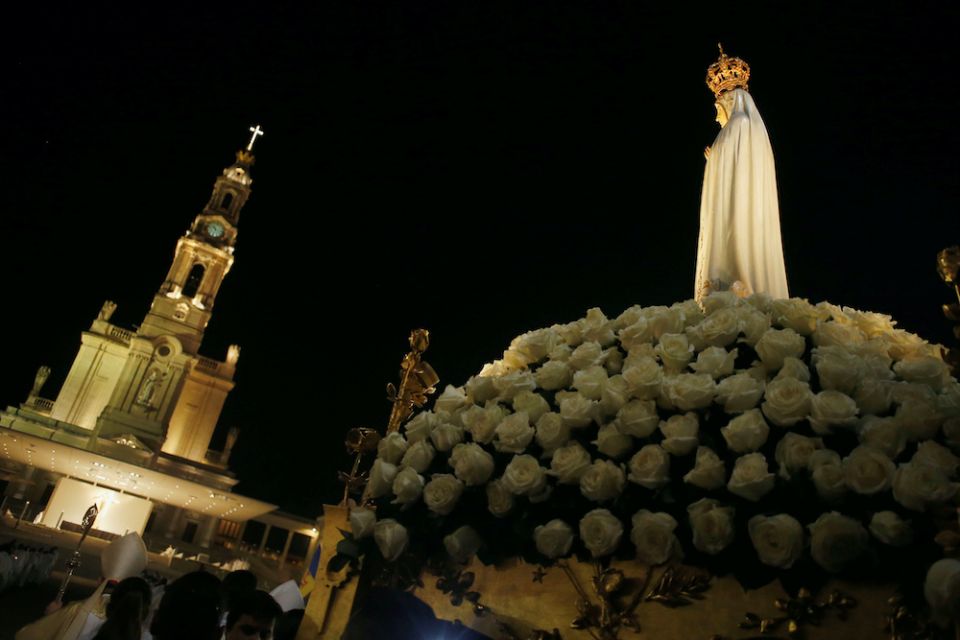 A statue of Mary is seen May 12, 2019, at the Marian shrine of Fatima in central Portugal. Thousands of pilgrims arrived at the shrine to attend the 102nd anniversary of the first apparition of Mary to three shepherd children. (CNS/Reuters/Pedro Nunes)

Archbishop Carlo Maria Viganò is back in the news and not a moment too soon. This time, he brings a warning not from his long experience as a Vatican insider or as a diplomat, but a more direct communication from God: The Vatican is lying about the third secret of Fatima, and it has been lying since the reign of Pope St. John XXIII!

"The third part of the message that Our Lady entrusted to the shepherds of Fatima, so that they could deliver it to the Holy Father, remains a secret today," Viganò told a Portuguese website, appropriately named Dies Irae (Day of Wrath). "Our Lady asked [the secret] to be revealed in 1960, but John XXIII published, on February 8 of that year, a statement in which he stated that [...] 'he does not want to assume the responsibility of guaranteeing the truth of the words that the three little shepherds say that the Virgin Mary addressed to them.' With this departure from the Queen of Heaven's message, a cover-up operation was initiated, evidently because the content of the message would reveal the terrible conspiracy of her enemies against the Church of Christ."

So, not just John XXIII, but Pope St. Paul VI and Pope St. John Paul II and Pope Emeritus Benedict XVI were all in on this conspiracy, too. Pope John Paul I presumably did not have time to ferret out the treachery! And, unsurprisingly, Pope Francis has kept the conspiracy going.

Viganò also criticized the popes for failing to consecrate Russia to the Immaculate Heart of Mary properly, so that they could pursue a policy of détente with communist Russia, a policy "inaugurated precisely by Roncalli, without understanding that without God no peace is possible." Now, however, Viganò thinks the time is ripe to conduct relations with Russia.

"Today," Viganò told the interviewer, "with a President of the Russian Confederation who is certainly a Christian [Vladimir Putin], the Virgin's request could be granted, avoiding further misfortunes for the Church and the world." Certainly a Christian? I suppose I missed the beatitude that stated "Blessed are the thuggish dictators who kill political opponents and journalists; theirs are the spoils of the oil wells in Siberia." 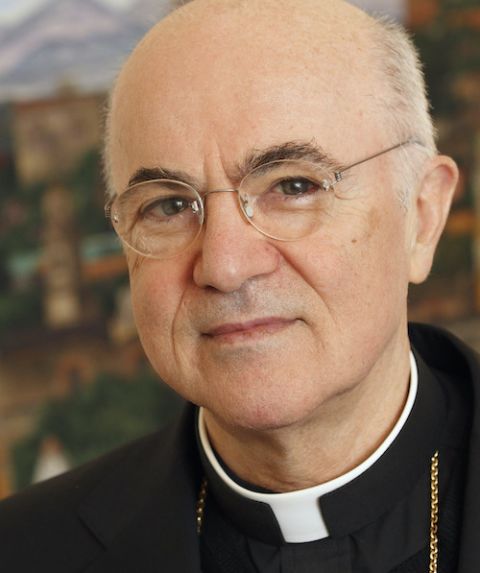 Italian Archbishop Carlo Maria Viganò, the apostolic nuncio to the United States, is pictured at his residence at the Vatican Oct. 20, 2011. (CNS/Paul Haring)

The archbishop's stroll into some of the kookiest conspiracy theories in recent Catholic history is not an example of an elderly gentleman losing his faculties and deserving of our pity. It would be cruel to mock such a person. No, Viganò has trafficked in nonsense on stilts for years.

I first knew of his fondness for right-wing craziness at one of my birthday dinners. Three of the monsignori who worked at the nunciature joined me and my friends at a nice little Mexican restaurant not far from my house to celebrate. The monsignori informed me that I had been attacked on Gloria TV. I had never heard of it, but it turned out to be the international equivalent of what was then known as "Real Catholic TV," now known as "Church Militant," that is to say its "newscasts" featured aggressive homophobia, combined with right-wing politics and ecclesial politics, heavy doses of conspiracy theories and routine condemnations of anyone suspected of modernism. The monsignori explained that the nuncio watched Gloria TV every day and so they watched it with him.

Viganò's penchant for nuttiness was also on display when he tricked Francis into meeting with Kim Davis, the Kentucky county clerk whose refusal to issue same-sex marriage licenses made her a heroine to homophobes throughout the world. She painted herself — and was introduced to the pope by Viganò — as a conscientious objector, but that was not really the case. As I noted at the time:

When the pope found out the truth of the situation — and that Davis was not exactly an exemplar of traditional marriage because she had four husbands, Viganò was recalled to Rome for a tongue lashing.

Then there was his "testimony" when he attacked Francis, accusing him of covering up the crimes of then-Cardinal Theodore McCarrick and calling upon the pope to resign, back in August 2018. It was obvious to me at once that Viganò's attack had little to do with any sense of outrage regarding McCarrick: If the issue was looking the other way regarding McCarrick, the last person to be blamed was Francis. It was John Paul II who promoted McCarrick not once, not twice, not thrice, but four times! And, by going public, Viganò violated the oath of fidelity he had taken to Benedict XVI when he was sent to Washington in 2011. Many bishops did not share my reservations about the testimony or about his track record of craziness. They were only too willing to testify to his integrity and virtue.

"I have known Archbishop Carlo Maria Viganò for 39 years," said Phoenix, Arizona Bishop Thomas Olmsted at the time. "We became colleagues in the Secretariat of State of the Holy See in August 1979, where he had been serving prior to my entrance into this work in service to the ministry of Pope John Paul II. Although I have no knowledge of the information that he reveals in his written testimony of August 22, 2018, so I cannot personally verify its truthfulness, I have always known and respected him as a man of truthfulness, faith and integrity. St. Paul says of priests: 'This is how one should regard us, as servants of Christ and stewards of the mysteries of God. Now it is required of stewards that they be found trustworthy' (1 Cor 4:1-2). That is how I have consistently found Archbishop Viganò." Does Olmsted still find Viganò "a man of truthfulness, faith and integrity?" Does he think every pope since Pius XII was a liar?

Archbishop Paul Coakley of Oklahoma City struck a similar tone, saying, "While I lack any personal knowledge or experience of the details contained in his 'testimony,' I have the deepest respect for Archbishop Viganò and his personal integrity. His claims, yet to be investigated or substantiated, confirm the urgency of a thorough investigation of Archbishop McCarrick's advancement through the ecclesiastical ranks given his history of alleged abuse, involving seminarians and young people." Does the archbishop still have the "deepest respect" for the former nuncio, now that we know he is trafficking in crazy conspiracy theories?

If you want to know one of the main reasons the U.S. hierarchy is in such bad shape, you have only to recall that Viganò played a central role in the selection of bishops from 2011 to 2016. Nuncios do not always get the candidate they want, but they have as much influence on the process as anyone else. For five long years, we had this hysterical man as nuncio.

By the way, what was the real third secret of Fatima? Beware any nuncio who violates his oath of fidelity to the pope; he will prove himself to be a crackpot.

Column | Viganò and the third secret of Fatima: What could go wrong?