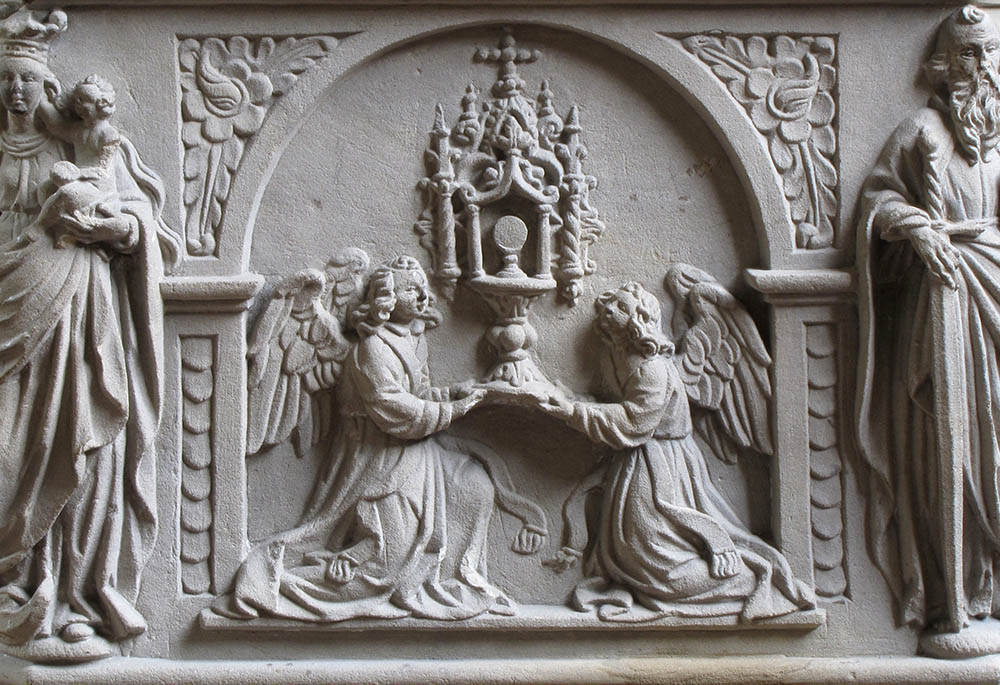 Eucharistic adoration is depicted in relief on a 1624 baptismal font at the Jesuit Church in Molsheim, France. (Wikimedia Commons/©Ralph Hammann)

The draft of the U.S. bishops' proposed new document on the Eucharist, which has been circulated among the prelates and was leaked to several media outlets on Nov. 2, may not mention pro-choice Catholic politicians like President Joe Biden.

But, even still, the document reads as if it could have been created before the Second Vatican Council.

Sacrosanctum Concilium, the council's Constitution on the Sacred Liturgy, emphasized that Christ is present in the assembly, proclaimed word, the eucharistic species and the person of the minister acting in persona Christi capitis ecclesiae.

Who is the audience for this document? Terms like "transubstantiation," "real presence," "venial/mortal sin" as well as "grave sin" require a familiarity with church language. Are these terms aimed at the people who no longer attend Mass and are not believers in the "real presence"?

For quite legitimate reasons, the bishops at the 16th-century Council of Trent framed their treatment of the Eucharist as "real presence" and "sacrifice." These are the two pillars of this document. That is to say it is framed in a Tridentine framework, not a Vatican II framework. Trent took place 400 years before Vatican II.

What of the 1992 Catechism of the Catholic Church, which begins its treatment of the Eucharist as "the summit and source" of the church's life and then comments on a number of names for the sacrament?

Among the other terms enunciated: the Lord's Supper; Supper of the Lamb; Breaking of Bread; assembly (synaxis); Memorial of the Passion and Death of the Lord; Holy Sacrifice (specifying it as "sacrifice of praise," "spiritual sacrifice," "pure sacrifice"); Holy and Divine Liturgy; Sacred Mysteries; Most Holy Sacrament; Holy Things; bread of angels; bread of heaven; bread of immortality; viaticum.

This is unreferenced by the bishops' draft.

Unaddressed also is why should we gather for the Eucharist as a communal action in a world that is dominated by "the self," "mine" and "me." Such pronouns do not appear in the prayers of the missal. In today's culture, this document does not address the issue of privatization of the Eucharist — leaving the impression that adoration and the receiving of Communion is all that matters. In effect, the document's silence on these issues leads to a pious individualism.

The document speaks of "eucharistic miracles," some of which are based on accounts of bleeding hosts. The problem here is that the church has never defined or described the Eucharist as "physical" in any way, always "sacramental."

A disproportionate part of the document is about worthiness, or confessing sins to a priest and seeking absolution. And all this at a time when there are fewer and fewer ordained presbyters.

Perhaps there could be a second document on "conscience," stressing the qualities that Pope Francis continually emphasizes: mercy and accompaniment. The current language in the document on those topics is dated and reflects much more of the 19th-century Baltimore Catechism than (even) the 20th-century Catechism of the Catholic Church.

Or perhaps it would be better for the bishops during their Nov. 15-18 meeting to decide to hire a new team of writers, with the hope of having a different draft of this text to review by next spring.

This story appears in the Bishops, Biden and Communion and USCCB Fall Assembly 2021 feature series.