The ecumenical movement is as important historically as the Reformation 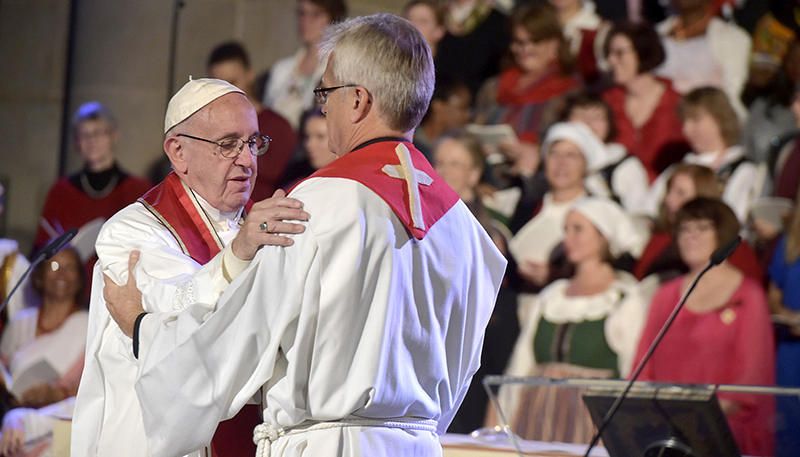 Pope Francis embraces the Rev. Martin Junge, general secretary of the Lutheran World Federation, in the cathedral in Lund, Sweden, on Oct. 31, 2016. Photo courtesy of L'Osservatore Romano via Reuters

A hundred years ago, Catholics were not interested in celebrating the 400th anniversary of the Protestant Reformation, except to remember how a bunch of reformers led people astray.

How times have changed!

This year, Catholics, led by Pope Francis, are celebrating the Reformation with their fellow Christians.

However, it is important that we not simply look at it through rosy glasses. The division of Christianity led to warfare and bloodshed on a par with the conflicts between the Sunnis and Shiites in the Muslim community. It was not pretty. We Christians cannot look down our noses at Muslims as if we have not also killed our brothers and sisters.

Although the fighting and bloodshed eventually tapered off, antagonism and prejudice between Catholics and Protestants (and among Protestants) lasted well into the 20th century.

It was not till the 20th century that progressive Protestant churches initiated the ecumenical movement. Conservative Protestants and Catholics held back, seeing ecumenism as giving in to relativism.

Two world wars fostered ecumenism in foxholes where soldiers of different faiths got to know and respect each other. The wars also made the churches realize they needed to put aside their squabbles to work for peace.

To Catholics growing up in the 1950s, Protestants were heretics outside the true church, although Protestants might be forgiven for their “ignorance.” In school and at home, Catholics heard stories of prejudice and discrimination from the WASP establishment.

We were reminded that the three groups most hated by the KKK were blacks, Jews and Catholics. Our American history books had photos of signs saying “Irish need not apply.”

The 1960 election proved that anti-Catholicism was still alive and flourishing. In polling, John Kennedy’s religion was singled out as an extremely important variable in the election.

Ecumenism was still a dirty word until the Second Vatican Council (1962-1965), whose document on ecumenism allowed Catholics to jump in with both feet. And jump we did. Catholics are now dialoguing with everybody, especially in the United States where there are so many religious groups. Likewise, the Vatican is engaged in dialogues with almost every religion of any significant size. Leaders in the Catholic ecumenical movement included German Cardinals Augustin Bea and Walter Kasper.

When it was time in the early 1970s for me to study theology before ordination as a Catholic priest, I did it at the Jesuit School of Theology at Berkeley. The school is part of the Graduate Theological Union, an ecumenical consortium of Protestant and Catholic schools.

This would have been unthinkable prior to the Second Vatican Council.

I remember taking a course in the Reformation and Counter-Reformation taught by two professors, one a Jesuit and the other Lutheran, where we read Luther and Calvin and decrees from the Council of Trent.

I truly felt I understood Luther better than my Lutheran classmates because Luther and I had grown up in the same church. The Lutheran students, on the other hand, had no experience of what he was railing against.

Not to say that there have not been bumps along the way.

Cardinal Joseph Ratzinger had a way of using words that could throw a monkey wrench into dialogue. He once said that only the Catholic and Orthodox churches were true churches because only they had legitimate bishops. Protestants were simply Christian communities. The problem was that he defined the word “church” by himself without dialoguing with anyone else.

Another challenge to the ecumenical movement is that it involves churches that are not static.

I recall an ecumenical conference at Durham University in England in 2006. We had ecumenical prayer services and even some sharing of the Eucharist. The participants were informed and friendly. One of the speakers was Cardinal Kasper, who at the time was the head of the Pontifical Council for Promoting Christian Unity. During the question period, I asked him, “If Luther were alive today, could you make a deal with him?”

I think Luther could be comfortable in the Catholic Church of today.

Vatican II accepted many of the reformers’ reforms. The Mass is in the vernacular; the laity can now drink from the cup; we are not selling indulgences; married Protestant ministers have been ordained as Catholic priests (and Francis is open to married priests); the theological dispute over faith and works has been resolved; the Catholic Church encourages the laity to read the Scriptures; and the concept of collegiality is tempering the absolute monarchical model of the papacy.

It might take time and dialogue, but I think it would be possible to reconcile Luther with today's Catholic Church.

Cardinal Kasper pointed out that the Catholic Church is no longer in dialogue with Luther but with his descendants, who have continued to evolve. Now we have other issues dividing the churches, like women priests, gay marriage, abortion, etc. These were not issues for Luther.

Ecumenical dialogue today is like trying to have a conversation between two people on horseback, when one of the partners is on a racehorse and the other is on a donkey. One needs to slow down and the other needs to speed up. 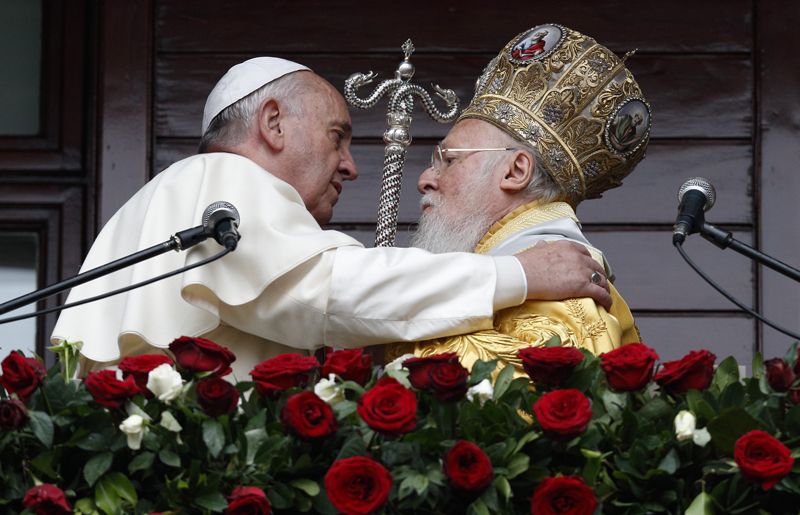 Pope Francis and Ecumenical Patriarch Bartholomew of Constantinople embrace after delivering a blessing in Istanbul on Nov. 30, 2014. (CNS/Paul Haring)

But we should not lose heart.

Ecumenism is not just about theological dialogue over matters of doctrine. There is also the ecumenism of friendship, prayer and social action.

Ecumenical friendship at work and in neighborhoods and among families has taken us way beyond the uncomfortable tolerance of the past. "Let them know that we are Christians by our love," not by our fights.

“My wish is that the dialogue between us should help to build bridges connecting all people,” said Pope Francis, “in such a way that everyone can see in the other not an enemy, not a rival, but a brother or sister to be welcomed and embraced!”

Praying together, exchanging pulpits and sharing the Scriptures are also signs of progress, but the work is not finished.

“Unity is primarily a gift from God for which we must pray incessantly,” said Pope Francis.

The ecumenism of social action has also progressed significantly as members of different churches work together to change the world. As Pope Francis said, “We can do much for the good of the poorest, of the weak and suffering, to promote justice and reconciliation, to build peace.”

Sadly, this social action has uncovered new divisions where American Catholics and Protestants working together against abortion are probably closer than their compatriots who are working for social justice and the environment. Catholics seem to be divided as much internally as they are from other Christians.

In any case, after 500 years, Reformation-era divisions have lost much of their potency, according to the Pew Research Center, which surveyed Catholics and Protestants in Europe and the U.S. More than half of Protestants and Catholics say they are more similar than different from each other.

What might be next steps in the path toward unity?

1. Churches (especially the Catholic Church) must recognize the important role of ecumenical marriages in the movement toward unity.

Spouses in such marriages should be welcomed at the Lord’s table in the churches of both spouses as examples of the unity that is possible.

As Pope Francis says, Communion is not a reward for the perfect but food for the weak. The couples are already united by a sacramental love that reflects the unity of Christ with his church; they should be able to be united at the Eucharist.

2. The unity that comes from sharing in the same baptism should trump most disagreements.

For too long, the Catholic Church has demanded agreement on how we explain the faith rather than a unity in the faith.

Seeing the Eucharist as an opportunity for the Christian community to give praise and thanks to God while being transformed into the body of Christ active in the world today is more important than agreeing on transubstantiation, a term even Catholics do not understand.

The Eucharist can be a path to unity rather than simply a celebration of doctrinal agreement, which frankly Catholics no longer have in any case.

3. The Catholic Church has to return to seeing itself as the “big tent” that is inclusive rather than as an exclusive club for the cognoscente.

The Catholic Church moves slowly, but its goal must always be to be more inclusive, more "catholic" in the sense of universal.

Protestant churches, on the other hand, are the entrepreneurial engines of Christianity, where new ideas are tried and incorporated into Catholicism if they succeed and discarded if they fail. In the past, this role was performed by religious orders, but their role in the church is declining.

“It is clear that the faith is not intransigent, but grows in coexistence that respects the other,” said Pope Francis. “The believer isn’t arrogant; on the contrary, truth makes him humble, knowing that, more than our possessing it, it is truth that embraces and possesses us."

We see the Reformation very differently today than we did 100 years ago. How will we see it in another 100 years?  My hope is that ecumenism continues to progress so that at the next anniversary, we will truly know and experience our oneness in Christ.

Column | The ecumenical movement is as important historically as the Reformation

Churches' struggles could be a staging ground for the new vessel