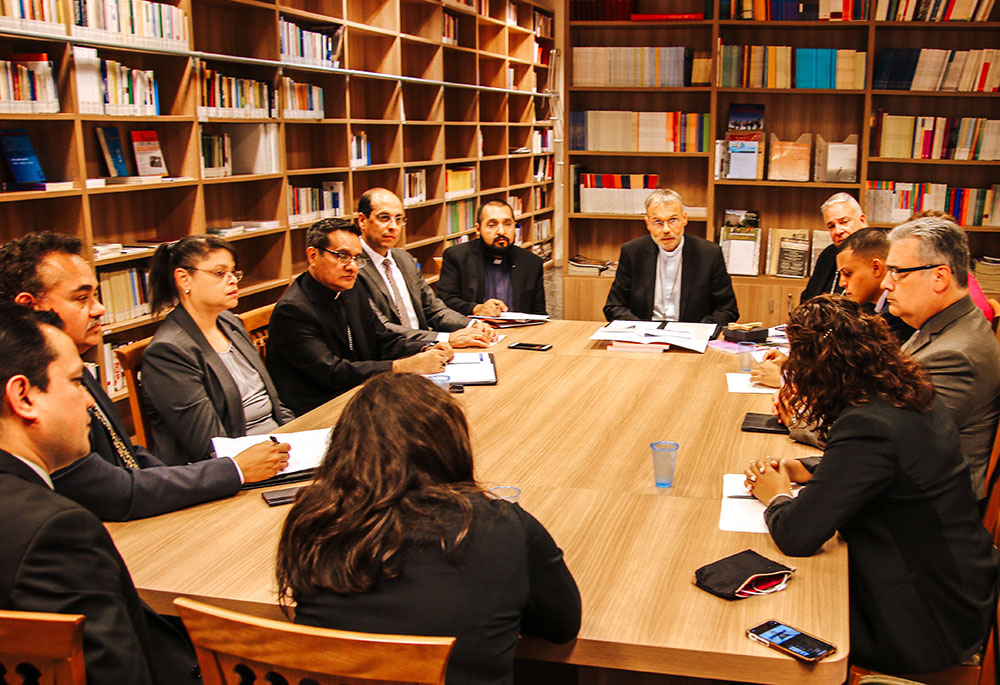 Encuentro representatives from the United States meet with German Bishop Franz-Peter Tebartz-van-Elst, delegate for catechesis at the Pontifical Council for the New Evangelization, at the Vatican Sept. 16, 2019. (CNS)

Catholics in the United States have been engaged for 50 years in groundbreaking processes of synodal discernment, dialogue and decision-making. Some readers may ask: How is this possible? Isn't synodality a novelty, a trend distinctive of Pope Francis' pontificate? How come I never heard of this in my parish, diocese, Catholic school, seminary or college?

If you asked any of these or similar questions, chances are that you are unaware of some of the most exciting — and yes, synodal — conversations about ecclesial life, mission and evangelization among Hispanic Catholics, who constitute nearly 45% of the Catholic population in the U.S.

Lack of awareness about the National Encuentros of Hispanic/Latino Ministry (aka "Encuentros"), and the processes of ecclesial discernment and collaboration at their core, remains a major gap in ministerial formation as well as in our shared understanding of what it means to be American Catholics.

Perhaps this is the crux of the matter. For far too long, Hispanics have been perceived as "foreigners," "aliens," "visitors," and not as constitutive members of our Catholic community.

We continue to assume that to be Euro-American, racially white and English-speaking are the essential marks of American Catholicism. In certain circles, one could add middle-class and college-educated to that list. Consequently, whatever happens in the faith communities that do not match such identifiers fails to be perceived or treated as really American Catholic.

If more Catholics in our country during the past half a century had been educated about the Encuentros and participated in these experiences of ecclesial dialogue, forging a church that is less clerical, more collaborative and more inclusive, we would be better positioned to appreciate the current process foregrounding the 2023 synod on synodality. 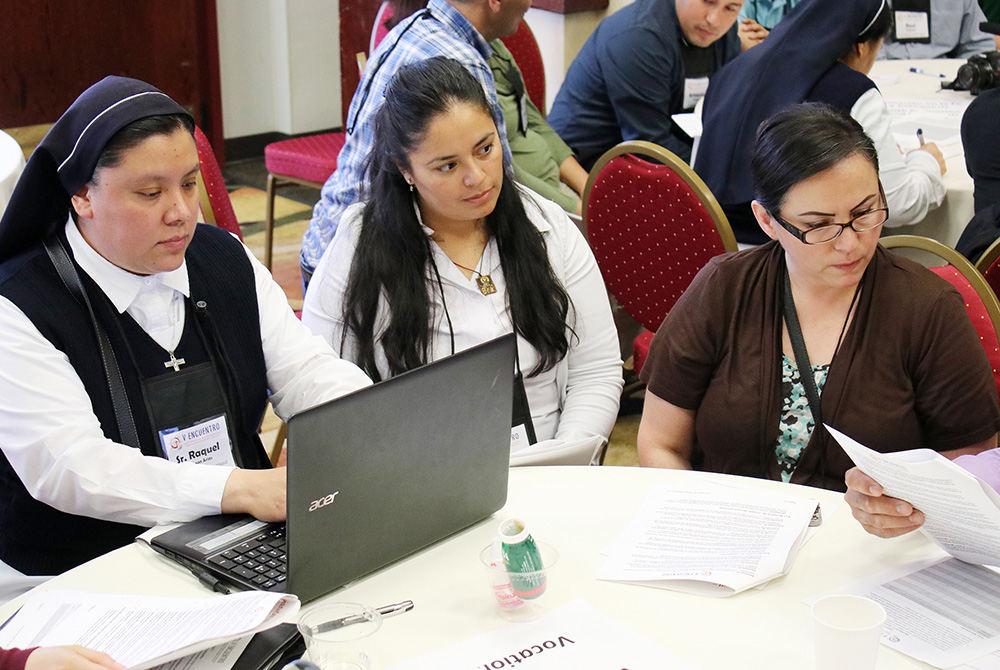 Sr. Raquel De Leon types notes as Victoria Rodriguez of the Diocese of Boise, Idaho, and Maria Elena Ruiz of the Archdiocese of Portland, Oregon, listen to speakers June 22, 2018, at the Region XII gathering of V Encuentro in Portland, Oregon. (CNS/Catholic Sentinel/Katie Scott)

Birth of a synodal model before it was called 'synodal'

Fifty years ago, during the fall of 1971, leaders working in Hispanic ministry, mostly clergy, began a series of conversations to discern ways to better serve and evangelize the growing Hispanic Catholic population nationwide.

Fr. Edgar Beltrán, who had recently moved from Colombia, South America, to serve in the United States, facilitated many of these conversations. He had worked for CELAM, the Latin American bishops' council, and was instrumental in the conversations that led to the bishops gathering in Medellín, Colombia, in 1968.

Medellín remains a major milestone in the ecclesial consciousness of Latin American Catholicism. Not merely an "adaptation" or "implementation" of the Second Vatican Council, but an appropriation of the spirit of the council in light of the social and ecclesial Latin American experience. Echoes of Medellín continue to reverberate and inform many ecclesial conversations today.

This appropriation could not have happened by only listening to the clergy or meeting in diocesan offices. It could neither have happened by only launching well-intentioned prayer campaigns. Medellín was preceded by multiple consultations — encuentros — with Catholics at all levels, including bishops and campesinos (peasants), leading experts and people with little or no education, teachers and advocates, often sitting in the same room and listening to one another respectfully. 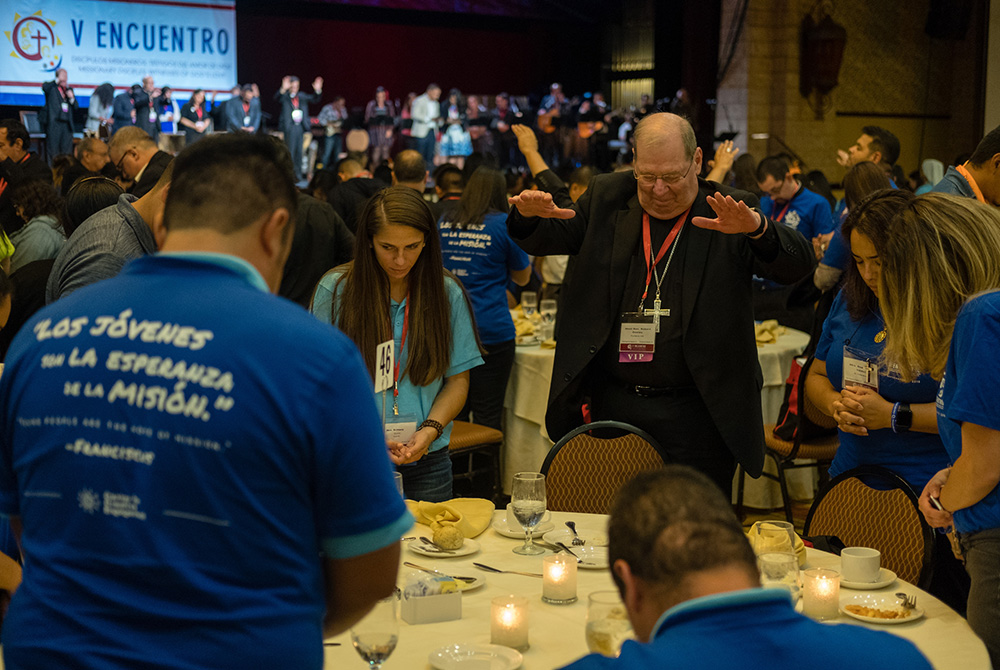 This idea of encuentro was readily embraced by Hispanic leaders and many others working with Hispanic Catholics in the United States. Some of the leaders overseeing Hispanic ministry at the time were white, Euro-American priests and vowed religious who had lived in Latin America and were familiar with the vibrant ecclesial experience there.

In the United States the term "Encuentro" points to widespread processes of consultation and the national summits resulting from them. The Encuentros have been exercises of reflection and analysis to discern how to best respond to the evangelization needs of Hispanic Catholics while affirming and embracing their presence and contributions in church and society. Officially, there have been five national Encuentros: 1972, 1977, 1985, 2000 and 2018. In 2006 there was also a National Encuentro for Hispanic Youth and Young Adult Ministry.

The Third Encuentro (1985), for instance, engaged more than 600,000 Catholics nationwide, mostly Hispanic, in a two-year consultation process, and yielded a national pastoral plan for Hispanic ministry (1987), which was endorsed by the entire body of Catholic bishops at the time. The Third Encuentro is perhaps the best iteration of this ecclesial, synodal movement and its potential. More recently, the Fifth Encuentro (2018), following a similar methodology, anticipated some of the conversations about synodality that occupy our Catholic imagination today.

Hispanic Catholics have been modeling for decades practices of synodal consultation, thinking and dialogue that seek to imagine fresher ways of being church in the U.S. The rest of the Catholic community could learn much from the Encuentros and the experience that Hispanic Catholics and others have gained from participating in them. 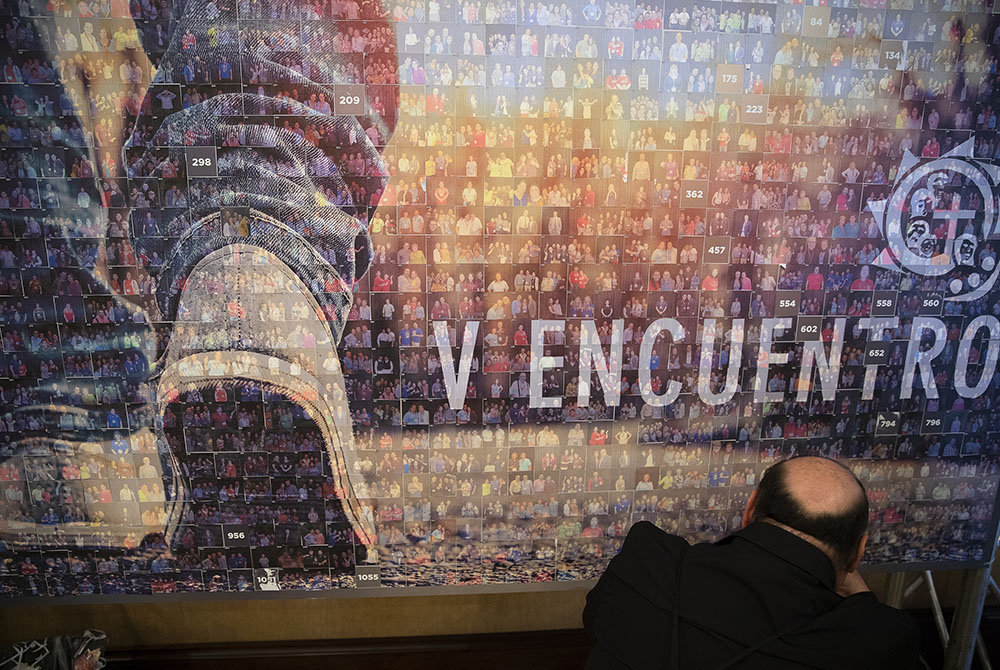 A delegate sticks a picture to a photo booth panel Sept. 22, 2018, during the Fifth National Encuentro in Grapevine, Texas. (CNS/Tyler Orsburn)

Encuentros and their tested method of synodal discernment

If I were to name some of the methodological keys of the Encuentros, I would highlight five. One, the Encuentros rely on a well-defined structure of multi-level consultation that begins in parishes and small faith communities, extending to diocesan, regional and eventually national consultations.

Two, listening within the Encuentro model of discernment begins at the grassroots. The process recognizes the de facto presence of the Holy Spirit in every baptized person, regardless of ecclesial rank. In the Encuentro process, we all come together as disciples of Jesus Christ. The bishop and the expert as well as the parent raising children at home and the person in the periphery (e.g., prisoner, addict, immigrant) are welcomed to express their voices, each from their particular reality. The community listens; the people of God speak.

Three, as the discernment process advances from more local to wider circles of engagement (i.e., from parish to diocese; from diocese to region), representation in future conversations is decided by delegation. The community, consulting with their pastors, decides in prayer and dialogue who will best bear their witness, voice, concerns and hopes. It could be a priest or a theologian, perhaps neither. It could be a young person struggling with questions of religious belonging or a faith-based activist committed to a consistent ethic of life. In delegating representation, the community exercises ecclesial trust. 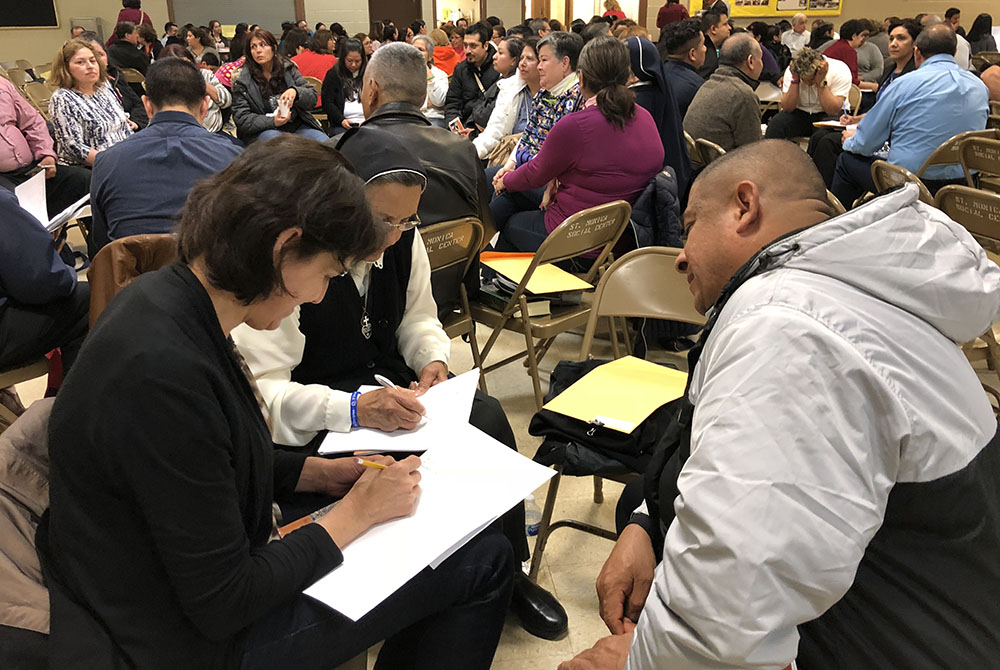 A woman religious and other delegates share information during a regional encuentro in the Diocese of Rockford, Illinois, April 28, 2018, at St. Monica Parish in Carpentersville. (CNS/El Observador/Margarita Mendoza)

Four, the Encuentros have been fabulous spaces to imagine and dream together what it means to be church here and now, and what our life as a church could be tomorrow. Many ideas are considered. What I find most fascinating is that they come from the hearts and minds of people of faith in all strands of life.

After serious discernment of the signs of the times in the present, the Encuentros usually make recommendations for pastoral action and even structural reform. Much of what happens today in Hispanic ministry — i.e., a national pastoral plan, diocesan offices, attention to Hispanic youth and their families, commitment to theological education of Hispanic leaders, etc. — has at some point been recommended via the Encuentros.

Fifth, the Encuentros are always guided by an unremitting passion for evangelization. In the end, this is what the Encuentros and synodality are all about. Those participating in the Encuentros have been inspired by the desire to foster joyful Christian discipleship and missionary activity. If you spend some time reading the conclusions of the Fifth Encuentro, you will find yourself enthralled by a great manual for evangelization for U.S. Catholics in the 21st century.

On the way to the 2023 synod on synodality

Yes, Catholics in the United States have been engaged for 50 years in synodal discernment and engagement via the Encuentros. For most of this period, we have not used the specific category "synodality," but we have been doing precisely what this vision implies. I think that other groups in our church have done likewise, as in the case of the Black Catholic Congresses and the Black Catholic Theological Symposium.

Catholic parishes, dioceses and other ecclesial units and groups in the United States have a treasure in the history of the Encuentros, their methodological commitments and their conclusions.

The greatest treasure, nonetheless, is the multitude of Hispanic and non-Hispanic leaders who have participated in the various Encuentros, more recently the Fifth Encuentro (2018). Parishes, dioceses and organizations in our church can benefit immensely from the wisdom of these leaders to facilitate local and national synods as well as synodal conversations. Let's draw from our own resources and ecclesial experience.

To enter this process of synodal discernment is to embrace the hope of imagining the type of Catholic experience that we want to forge for the rest of this century. This could be a perfect time for our church to listen to the not always predominant groups that for long have been engaged, directly or indirectly, in synodal dialogue and discernment. Doing so may well be one of the first fruits of synodality in the U.S. Catholic world.

A version of this story appeared in the Dec 24, 2021-Jan 6, 2022 print issue under the headline: Encuentros: 50 years of synodal experience.