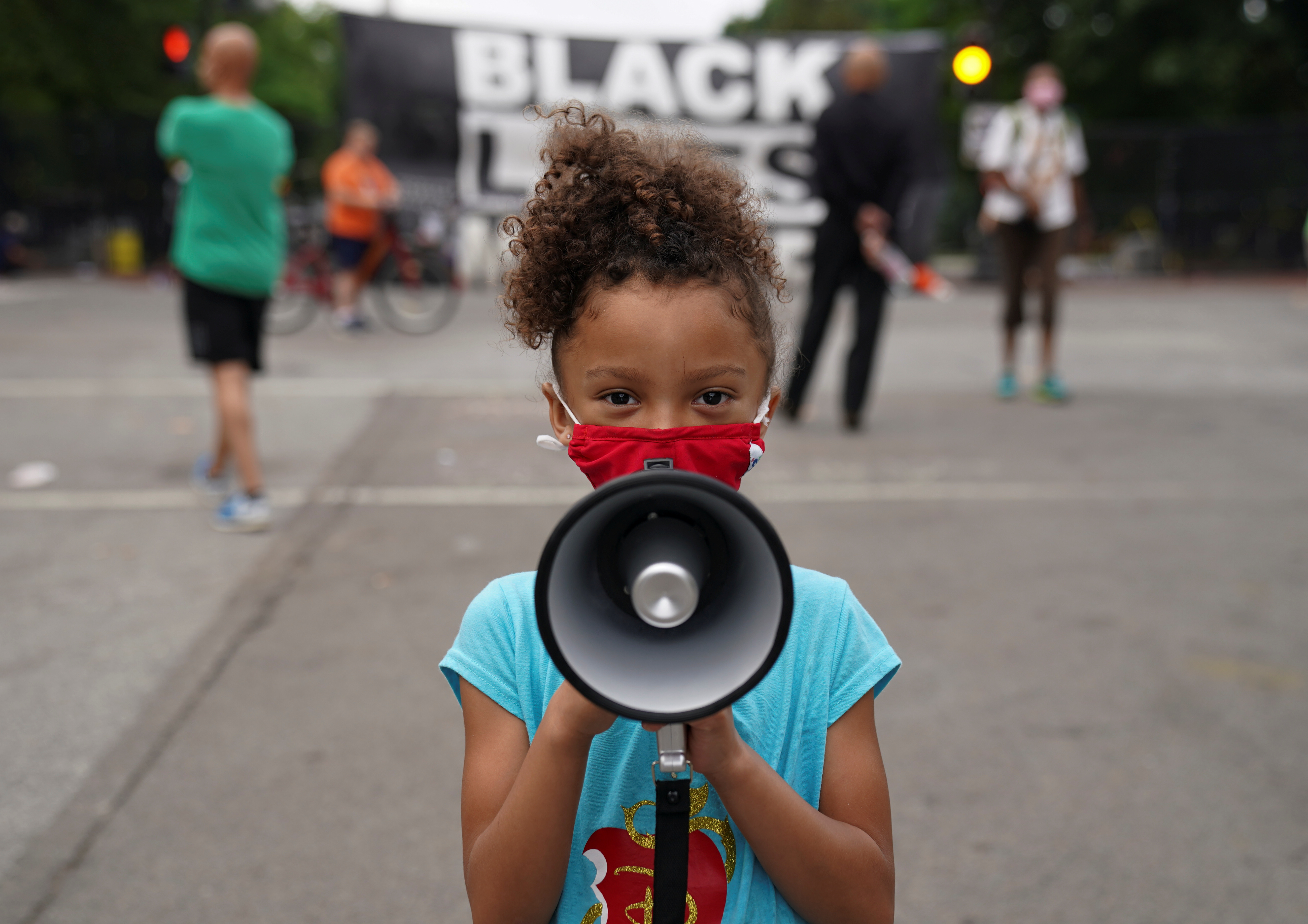 Mischa, 6, from Maryland, holds a bullhorn in front of a "Black Lives Matter" protest sign near the White House in Washington June 10, 2020. (CNS photo/Reuters/Kevin Lamarque) 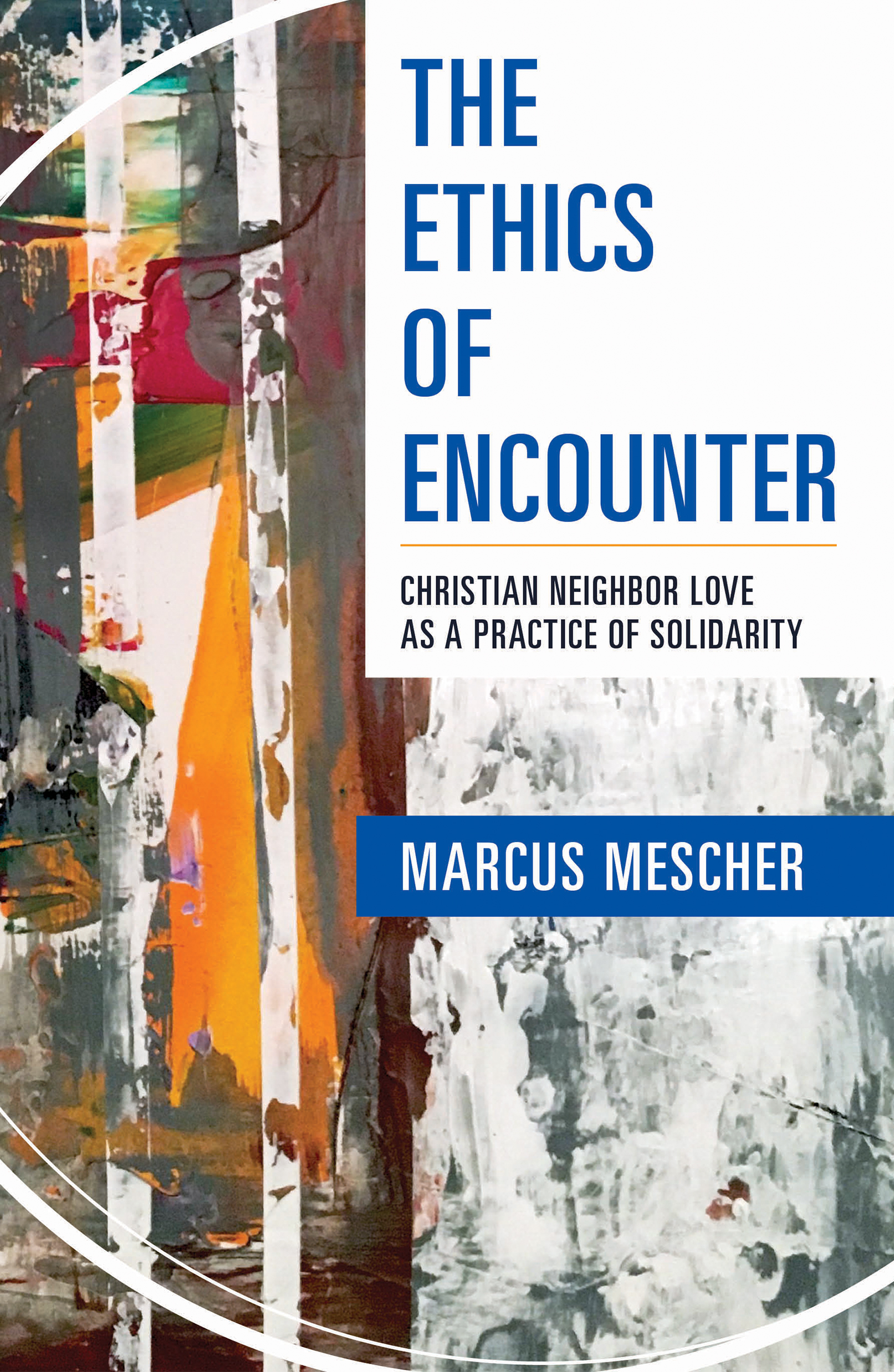 THE ETHICS OF ENCOUNTER: CHRISTIAN NEIGHBOR LOVE AS A PRACTICE OF SOLIDARITY
Marcus Mescher
187 pages; Published by Orbis Books
$40.00

It is a truism, perhaps especially in left-leaning Catholic circles, that Catholic social teaching is the church's best-kept secret. Marcus Mescher's The Ethics of Encounter: Christian Neighbor Love as a Practice of Solidarity seeks to bring this best-kept secret to the fore and make it accessible to U.S. Catholics. Mescher argues that Catholic social teaching offers invaluable resources for navigating contemporary social problems and building what he calls a "culture of encounter" in a country beset by individualism, social division and unjust hierarchy.

If it holds such promise for contemporary problems, then why is Catholic social teaching so little-known or understood, even among Catholics? Mescher offers a few answers. Drawing on sociological surveys, Mescher points to the allegedly poor ethical formation of contemporary young people, whom he views as generally morally relativistic. Their primary moral commitment, he argues, is to tolerance. The problem with tolerance is that it shifts easily from "live and let live" to "live and let suffer" or "live and let die." Tolerance makes room for other people, that is, but it does not take responsibility for them.

Tolerance, he argues, offers the major alternative to the other pervasive social problem Mescher identifies as "tribalism." Though he names many forms of so-called "tribalism," including various forms of discrimination, Mescher focuses especially on the "hyperpartisanship and polarization" between Republicans and Democrats. I do think there might be a better term for the destructive, unquestioning in-group loyalty that Mescher is describing here. "Tribalism" suggests an (undoubtedly unintentional, in Mescher's usage) association with certain negative Native stereotypes.

Mescher's point about the strong divisions in contemporary U.S. society, however, is an important one for understanding why he believes that encounter provides the antidote. He argues that moral relativism and social separation make us unable to see one another, to communicate with one another, to be in solidarity with another, across lines of difference. Genuine encounter, guided by an expansive view of neighbor love and informed by Catholic social teaching, provides a way out of this impasse and toward a more just and connected society.

Yet Mescher argues that Catholic social teaching is too abstract for most people to know how to live what it teaches. While abstract principles — he names human rights, environmental stewardship, the preferential option for the poor and the notion of the common good — are strong, there is too little guidance as to how these principles can be applied in particular situations.

This is where an ethic of encounter comes in. The major purpose and the strength of The Ethics of Encounter is as a guidebook for Catholics to apply Catholic social teaching to their everyday lives. Mescher emphasizes the importance not simply of rules and principles, but of moral formation. Taking up virtue theory, he argues that we make ourselves into the sorts of people we want to be by behaving like the people we want to be: we become courageous, for example, by repeatedly performing acts of courage. The point is not just self-improvement for its own sake. The process of self-transformation shapes us to be the sorts of people who can also shape society.

To this end, Mescher offers a beautiful reflection and analysis of the story of the Good Samaritan as a model for how we are to love God and neighbor. He draws on biblical scholarship and engages Dominican Fr. Gustavo Gutiérrez's interpretation of the parable. Mescher uses this as a springboard for his own ethical project: a guide for living the principles of Catholic social teaching in everyday life, with a strong emphasis on virtue and on the notion of solidarity. He concludes with a discussion of Jesuit Fr. Greg Boyle's Homeboy Industries, which he describes as a "blueprint" for how to live neighbor love in a way that overcomes violence, trauma and division.

I found Mescher's discussion of solidarity particularly important and helpful, especially in our present context. Solidarity is not simply about random acts of kindness or doing good works, as Mescher observes. It is about building relationships, identifying and working together toward common goals, providing mutual support rather than unilateral charity, and engaging in shared struggle with people who are different than ourselves. Though The Ethics of Encounter was written and published before the Black-led, multiracial uprisings against police brutality began, our current political moment demonstrates how crucial the concept of solidarity is.

Yet it is our current political moment which also raises questions, for me, about Mescher's characterization of young people as moral relativists, committed above all to tolerance. I am struck by an apparent discrepancy between how young people reportedly answer survey questions about their moral reasoning, and how they actually behave. Across the country, young people — in their early 20s and even in their teens — are demonstrating remarkable courage, dedication, community-building and moral clarity in the struggles against police brutality. In my current city of Nashville, six teenage girls organized a Black Lives Matter protest march of 10,000 people in under a week. While I agree that Catholic social teaching offers tools and frameworks that could benefit younger Catholics, I also believe there is much that young people, including young people without training in this tradition, can teach ethicists and theologians about neighbor love, solidarity and moral commitment.

Solidarity is about building relationships, identifying and working together toward common goals, providing mutual support rather than unilateral charity, and engaging in shared struggle with people who are different than ourselves.

Finally, while I find Mescher's ethics of encounter persuasive, I also wonder about the limits of encounter. Jesus bridged social divisions of his day and preached neighbor love, but he also flipped over tables (Matthew 21:12-15) and said he brought not peace, but a sword (Matthew 10:34). With the rise of fascism and of increasingly open and virulent white nationalism, I am inclined to wonder: When is encounter appropriate, and when might it not provide the tools we need? What sorts of Christian ethical and theological resources might help us discern when we should refuse "us versus them" rhetoric, and when we should draw clear lines?

The Ethics of Encounter, particularly its chapters on the how and why of applying Catholic social teaching to specific problems, seems well-suited to Catholic college classrooms, and to church reading groups focused on social justice. Because it draws on the work of so many figures, the book seems especially well-suited as a companion to primary texts in moral and liberation theologies on college syllabi.

Catholic social teaching has been our best-kept secret for too long, and I hope Mescher's blueprint helps bring it into the open for a new generation of Catholic fighters for justice.