In 'Gaudete et Exsultate,' Francis calls us on journey of 'small holiness' 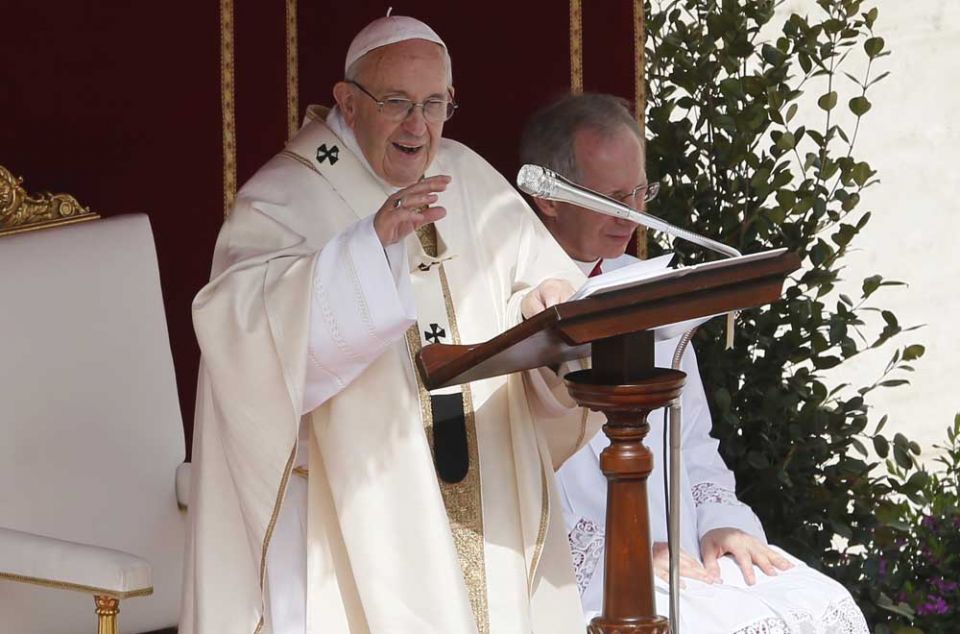 Pope Francis gives the homily as he celebrates Mass marking the feast of Divine Mercy in St. Peter's Square at the Vatican April 8. (CNS photo/Paul Haring)

In the last 48 hours, there have plenty of quick takes on Pope Francis' apostolic exhortation Gaudete et Exsultate ("Rejoice and Be Glad"), on the call to holiness in today's world. That includes my own quick assessment at dailytheology.org, which has all of the strengths and limits of a response written with only the day's first cup of coffee. And, predictably, more heat than light has been produced by some of the "juicier" bits of the text, where Francis' words seem to challenge some of the assumptions of his fans and his critics.

Whether with glee or despair, some of the quick reads have made too much of the supposed discontinuity between Pope Francis and his predecessors. Headlines like "Francis contradicts previous Popes" might not be the "unguarded tongue[s], set on fire by hell" that Gaudete et Exsultate warns against in a paragraph on "verbal violence" on the internet, but they don't necessarily help to convey the wider horizons of the document. Neither do simplistic narratives that sharply contrast Francis, the "cool pope," with his predecessors; after all, there is a whole chapter on the Christian life as "a constant battle," "a constant struggle against the devil," who is not to be dismissed as "a myth, a representation, a symbol, a figure of speech or an idea." This "cool pope" remains a deeply traditional Roman Catholic bishop.

Nevertheless, the fact that Pope Francis felt the need to write an entire letter re-proposing a teaching last proposed only 50 years ago at the Second Vatican Council suggests he thought that teaching needed "re-upping" on the screens of the church's life; that teaching, deeply traditional and yet arguably one of the most powerful innovations of the council for our understandings of holiness and of the church, is Lumen Gentium's teaching on the universal call to holiness. Like the council itself, Francis is most radical in being so traditional, in going back to the roots of our Christian tradition.

For many Catholics, admitting (proclaiming?) that "I'm no saint" is a default position, particularly in comparison to those canonized holy women and men who surround us physically and verbally in our churches; these "paradigmatic saints," as St. Joseph Sr. Elizabeth Johnson names them in her excellent book Friends of God and Prophets, seem to be playing in the major leagues while we struggle in spiritual tee-ball. Such a default position has longstanding, if shallow, roots; for much of the pre-conciliar history of the church, theologian Aurelie Hagstrom reports, while clergy and those in professed religious life were encouraged to imagine themselves as called to be holy, the highest bar most laypeople were encouraged to aspire to, especially married laypeople, was to "avoid sin."

Vatican II changed that. While in its earliest drafts the material in Chapter 5 of Lumen Gentium on "The Universal Call to Holiness" was written for a chapter on religious life, the final version proclaimed that "it is therefore quite clear that all Christians in any state or walk of life are called to fullness of Christian life and to the perfection of love" (40) and that "therefore all the faithful are invited and obliged to holiness" (42).

So why did Francis see the need to "repropose" this teaching, and is there anything new, any development or growth in our understanding of the call to holiness between 1964 and 2018?

First, it seems to be that old habits die hard, particularly if those habits of thought and expectation not only elevate the saints high above our level, but also get us off the hook for not claiming the full vocation to holiness that Lumen Gentium and Gaudete et Exsultate both suggest. "Avoiding sin" is a much easier way of living one's baptismal life without as much bother.

But even if the call for holiness has been extended beyond the ranks of the clergy and religious, the dominance of the canonized, paradigmatic saints has continued. The unprecedented canonizations by John Paul II of women and men from every language, nation, and way of life, including significant numbers of lay women and men, helped accustom many Catholics to expect the presence of holiness among the married, the single, the nonordained and the non-vowed. And yet these paradigmatic figures still seemed to tower over us; they may have shared the same form of life as us, but still seemed almost a different species of Catholic.

This is where Francis' invocation of "the saints next door" seems so crucial to our growth in understanding the universal call to holiness. The letter highlights all the anonymous women and men — the "ordinary people in ordinary time" in the words of Elizabeth Johnson — who live lives of quiet holiness, and in so doing challenges our expectation that all sanctity is as public and heroic as that of the canonized saints. Karl Rahner, while suggesting that the church needs public, visible saints as the proof of the truth of the Gospel, also speculates about the presence of these hidden, unknown holy ones: "Quite possibly (who can say?)," he writes, the church "does not know anything at all about many of her greatest glories." And, Johnson reminds us, it is often as much a result of structures of injustice as much as their own humility, that God and not the church knows the names of these anonymous saintly women and men.

Further, Francis underlines the reality of sanctity as a journey, as something experienced as an adventure of a thousand steps rather than as a completed accomplishment. "Lord, I am a poor sinner, but you can work the miracle of making me a little better," he invites us to pray, calling us toward a holiness not of monumental heroism but of small gestures and small details. Even if many have rightly noted the Ignatian elements of this letter, Franciscan themes from Pope Francis's namesake of Assisi resound through this text.

The call to holiness that Pope Francis re-proposes in the beautiful second-person singular spiritual direction of the first chapter is a holiness rooted in Franciscan minoritas, in becoming small and embracing the God who became small for our sake. Such a "small holiness" that can be found next door and that grows in small gestures like yeast in a loaf or a mustard seed in a field seems to me to be radical "innovation," the "making new," of Francis' teaching here.

[Brian Flanagan is Associate Professor of Theology at Marymount University in Arlington, Virginia. He is the author of Stumbling in Holiness: Sin and Sanctity in the Church, to be published this September by Liturgical Press, and a contributor to the blog www.dailytheology.org.]

Commentary | In 'Gaudete et Exsultate,' Francis calls us on journey of 'small holiness'