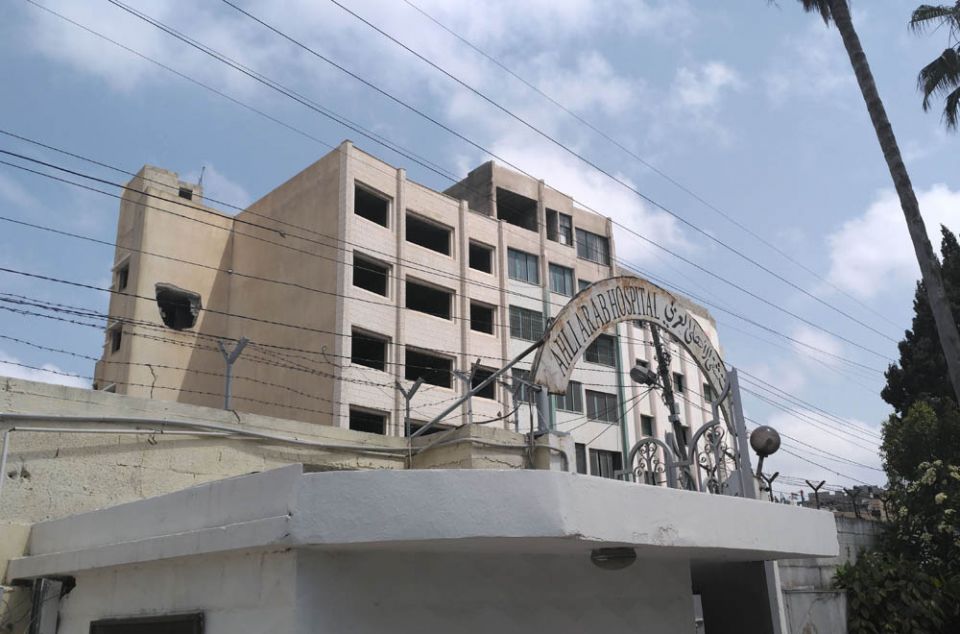 The entrance to Al Ahli Arab Hospital, with a war-damaged building behind it (Patrick Whelan)

Gaza Strip — Traveling to Tel Aviv, I sought out a pharmacy to obtain for my son, Olivier, some melatonin, a natural supplement that helps with jet lag and is widely available without a prescription in the United States. I discovered that, though it has no adverse side effects, melatonin requires a prescription in Israel that must come from an Israeli doctor; the pharmacist would not provide it to a physician like me from abroad.

This level of concern for our own health stands in stark contrast to the devastating health effects I observed during a June 7-8 visit to Gaza where residents have been living under severe Israeli economic sanctions for the past 11 years.

It is only with extreme difficulty that residents can enter or leave Gaza, and only with the permission of the Israeli government. The Erez Crossing is a looming building that once processed thousands of people traveling every day to work in Israel. But when my son and I arrived just before 9 a.m. on a Thursday, for an hour-long trip through Israeli customs, the terminal was virtually deserted.

Later, some Israeli friends told us that Palestinians had been replaced with other day laborers — Filipina women staffing hospitals and nursing homes; Romanian and Chinese workers staffing numerous construction sites; and Thai farmworkers being brought in to pick crops. Meanwhile, unemployment in Gaza is more than 40 percent, with 80 percent of the population receiving some kind of international economic assistance.

The Gaza side of the Erez Crossing was very bleak, with high concrete walls topped by barbed wire. We were bussed from the crossing to a security checkpoint with uniformed men from the Palestinian Authority. There we met our host, Nahed Wehaidi, the Gaza director of American Near East Refugee Aid — a relief organization founded after the 1967 Arab-Israeli War to provide aid for refugees in the Middle East. His negotiations allowed us through a third checkpoint, maintained just a few yards away by Hamas, the political party that is the de facto government of Gaza.

The purpose of our visit was to tour four hospitals and clinics, accompanied by a group of seven public health doctors and aid workers from American Near East Refugee Aid.

The first visit was Al Ahli Arab Hospital — the only Christian hospital in Gaza — first built in 1882 and operated for 30 years until 1982 by the Southern Baptist Convention in the U.S. The hospital and its clinics are currently sponsored by the Anglican Episcopal Diocese of Jerusalem.

The head of Ahli Arab, Suhaila Tarazi, who is from South Carolina, along with Jehad Al-Hesi, chief of pediatrics, spent an hour telling us about the malnutrition and related illnesses that they had been treating. The halls were packed with mothers and children. The United Nations Relief and Works Agency for Palestine Refugees in the Near East estimates that the number of daily medical consultations at their own 22 facilities across Gaza is 113 patients per doctor per day.

Every provider we met seemed overwhelmed. Their distress is in part a result of a January decision by the Trump administration to withhold $65 million of a $125 million contribution to the United Nations Relief and Works Agency for Palestine Refugees in the Near East. According to Tarazi, Ahli Arab recently had to drop the number of patient beds from 80 to 50 because of a lack of resources. 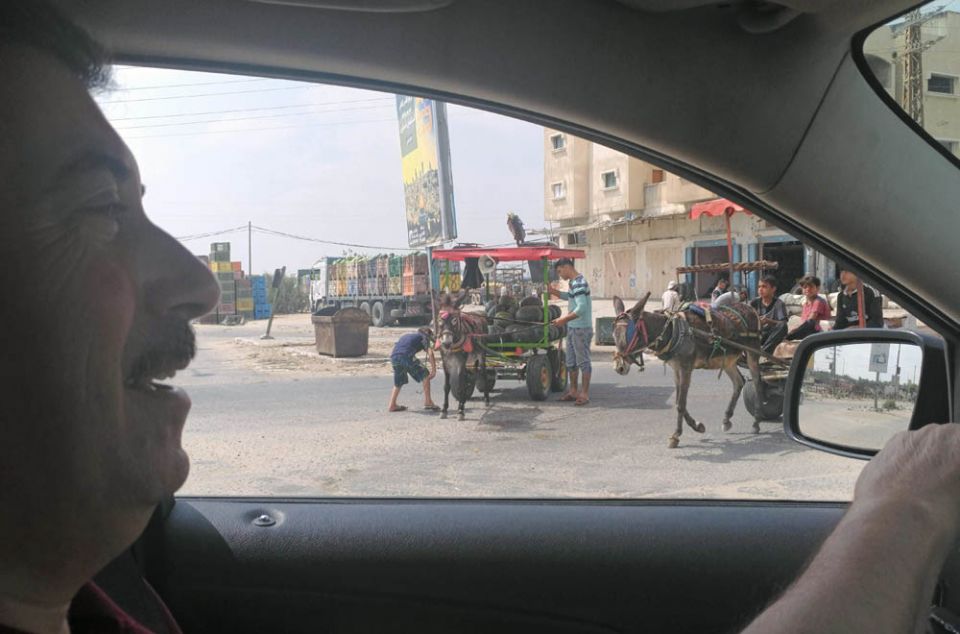 According to the author, donkey- and horse-drawn carts account at least half of all the vehicles on the streets of Gaza City which had no functioning stoplights during his visit (Patrick Whelan)

We visited an outpatient clinic in Gaza City — sponsored by the Middle East Council of Churches — that focuses on prenatal care, family planning and early childhood development. It was packed with women in dark-colored abayat and veils. Issa Tarazi, the executive director, took us to meet a group of girls who were in a program to help diminish the psychosocial impact of post-traumatic stress related to the conflicts. Thirty smiling teenagers insisted on performing a dance for us, to very loud music, proudly showing off their preparation.

The children of Gaza, Tarazi told us, are still suffering the consequences of the 2014 Israel-Gaza conflict that, according to UNICEF, killed more than 500 children and injured almost 3,400 — nearly a third with permanent disability. More than 1,500 children were orphaned. Tarazi said things got worse during two months of weekly protests that began in March against the Israeli blockade, with at least 125 people killed and thousands more injured. The Israeli Defense Forces have publicly stated that they are shooting to wound rather than to kill. A June 9 story in the Los Angeles Times documented the wave of lower extremity amputations of young people as a result of gunshot wounds to the legs that had overwhelmed medical facilities — which lack the kind of vascular surgery capability to which gunshot victims have access in most trauma centers in the United States.

At the Ard El Insan Clinic, the chief of pediatrics, Adnan Al-Wahaidi, said he had evaluated two children just that morning with rickets, a form of malnutrition almost never seen today in the U.S. He introduced me to one of the children — Jamal, a 2-year-old boy with the worst bowed legs of vitamin D deficiency that I had ever seen. Jamal waddled around one of the exam rooms, kicking a ball to the best of his ability, which Al-Wahaidi artfully returned.

One of the doctors told me they had seen many children with bullet wounds to their lower extremities — with treatment limited to cleansing the wounds, sterile bandages, antibiotics and only ibuprofen and Tylenol for pain relief. One couldn't help but notice bullet holes on the walls of the clinic, which doctors described as being "on the front lines" during the Israeli Defense Forces' invasions of December 2008 and July 2014.

At Al-Quds Hospital, a major trauma unit run by the Palestine Red Crescent Society, we were ushered into the palatial office of hospital chief Khalil Abou Foul, a trauma surgeon trained in Libya. A delegation of their doctors sat with us while he explained what the hospital was up against.

He took us into the operating areas and we all donned surgical boots for a visit to the cardiac catheterization laboratory. The doctors were very proud of all their equipment and the chief of interventional cardiology came out of a procedure to shake hands and tell us about their clinical capabilities — for people with insurance. He said they sometimes had to plan a month in advance for certain procedures in order to procure the necessary supplies; he had recently missed an international meeting because he could not get an exit pass in time.

Our last stop was to 1,600-year-old Orthodox St. Porphyrius Church, named for a fourth century bishop who demolished pagan temples and introduced Christianity. The caretaker of the church showed us a baptismal font made of white stone that dated to the construction of the church around the year 402, in which generations of his own family had been baptized. But the number of Christians has been falling as the level of distress in Gaza has been rising, he said.

Gaza City was itself a prosperous port in the spice trade, dating long before the time of Jesus. Now, with no functioning stoplights, hundreds of horse and donkey-drawn carriages driven by children, and only four to six hours of electricity available every day, there was a sense of disorder and economic desperation everywhere we went.

The most striking thing to me was the lack of hostility toward Israel in our conversations with the doctors, nurses, and the staff of that ancient church. Contemplating our visit, reconciliation seemed not only possible but essential.

For now, my inability to obtain melatonin from an Israeli pharmacy pales in comparison with all the reasons that Palestinian parents in Gaza have for losing sleep at night.

[Patrick Whelan, a former NCR board member, is a pediatric specialist at UCLA, lectures at the Keck School of Medicine, and is on the Academic Advisory Board of the Institute for Advanced Catholic Studies at the University of Southern California.]