Young progressive Catholics really do care about the church 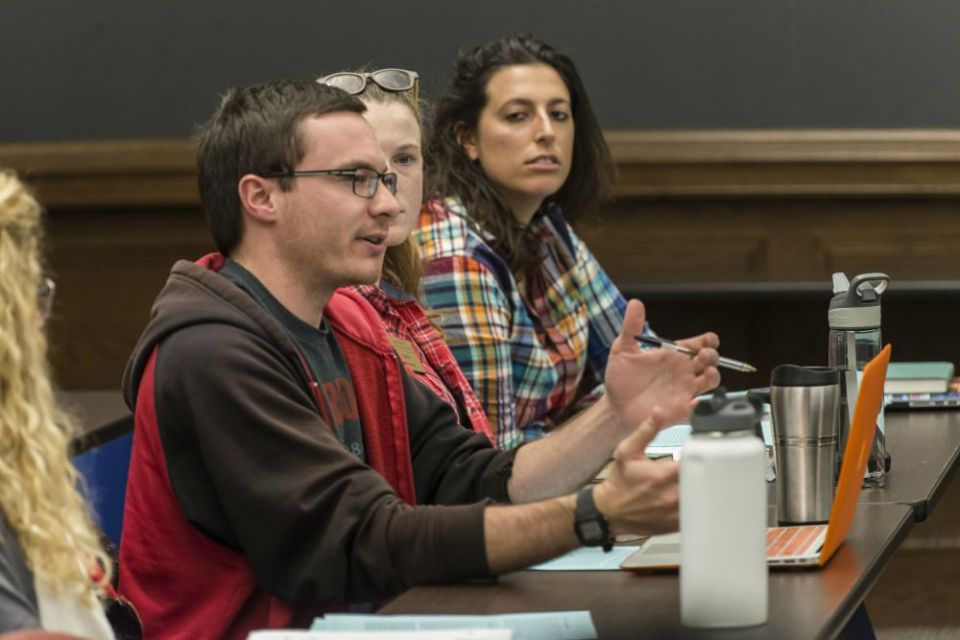 Students at Boston College's School of Theology and Ministry attend a class by Associate Professor of the Practice of Youth and Young Adult Faith Theresa O'Keefe in November 2016. (Courtesy of Boston College)

If that is the case, why do campus ministry programs at progressive Catholic universities have their liturgies packed with students, and why are there waiting lists for their retreat programs and immersion trips?

Why are programs like the Jesuit Volunteer Corps, or the Good Shepherd Volunteers or the St. Joseph Worker Program filled with 20-something Catholics eager to put their faith into action in some of the poorest and most broken places in our country?

And why are so many graduate schools in theology, ministry and religious studies brimming with young adult Catholics?

In late March, my speaking schedule led me to encounter Catholic young adults in several settings. One was at a progressive parish in Manhattan, another talk was with undergraduates at a Catholic college in the Bronx, and a third talk was held at Union Theological Seminary, also in New York City.

What I learned in each encounter is that progressive young adult Catholics care very deeply about their church. They really want to be a part of the church. Many of them want to lead and serve in the church.

The problem is, they're having a hard time finding a home in the church. They're having an even tougher time finding places in the church where their gifts are received and all are welcome. And, perhaps the biggest challenge of all, if they love the church enough to pursue graduate studies in ministry and theology, they find very little institutional support for their vocations.

Unlike seminarians or postulants to religious life, these young adults don't receive the security of housing and meals and a tuition-free education. Some of them rack up tens of thousands of dollars of student debt in pursuit of work that may not even be available to them. And, if they do find a job, those jobs almost certainly won't pay well.

Jackie Regan, associate dean of student affairs and career services at Boston College School of Theology and Ministry, told me in an interview that in any given year, the school has a student body of between 350 and 400 students in masters' programs of theological studies, theology and ministry, and divinity. At least half of these students are women. What they all share in common, she said, is that they are "preparing for holistic formation in service to the church and the people of God, or for faith-based service."

These students, she said, give her so much hope for the church.

My question is, why can't the church find more hope in them?

Of those School of Theology and Ministry students, 45% are under the age of 30, and 40% are between the ages of 31 and 40. So, almost all of them are millennials — that generation of young people who supposedly have no interest in the church.

"They really want to be Catholics," Regan told me. "That doesn't mean they're uncritical. They are faithful Catholics, but also thinking Catholics. They learn how to handle complexity in pastoral care."

And Boston College's School of Theology and Ministry isn't a singular example. There are thousands of Catholic graduate students doing similar studies in schools across the country, like Loyola University Chicago or the Jesuit School of Theology at Santa Clara University. And traditionally Protestant schools like Yale Divinity School and Harvard Divinity School also host large cohorts of Catholic students. When I was a master of divinity student at Yale in the early 2000s, Catholics comprised the second largest denomination on campus.

Many of these students go on to teach or lead campus ministry in high schools, others pursue chaplaincy work, while others move into non-profit work.

Regan is noticing a trend of lower interest in parish work among lay School of Theology and Ministry students. She believes part of the issue may be instability in parish work due to parish closures and mergers (which often happen, ironically, because of a lack of priests).

But there are other issues, of course, that make parishes inhospitable environments for many of these graduates. One is that lay people in parishes are often stuck in a clerical mindset that doesn't place value or authority on lay leaders, even if they do have the same education and training as their priests.

Then there are the selective "orthodoxy" tests. Graduates who are LGBTQ are rarely hired by parishes, and those who do find a parish willing to welcome them must live in fear of being one of the hundreds who have been fired by Catholic institutions because of their identities or same-sex marriages.

Even heterosexuals do not necessarily have an easy road. I've heard over a dozen stories of young women who, in the course of interviewing for parish jobs, are asked whether they are cohabitating with a boyfriend. Many are told they must sign morality clauses promising that they won't.

Regan tells me that she hears from many School of Theology and Ministry graduates that they struggle once they leave graduate school, which offered them an experience that is often lacking in the typical parish: a deep sense of community, meaningful liturgies, collaboration with seminarians and ordained men, and a space where they could share their ministerial gifts with freedom and creativity.

Rather than finding parishes that will enthusiastically welcome their gifts, many of them have to wander about and either find or create their own communities where they can be supported and nourished.

So much training, so many gifts go underutilized or not employed at all in our church, which, as we all know well, is desperate for well-formed, pastorally sensitive and charismatic leaders.

It is downright tragic when you consider the kind of sacramental leadership we are losing. How much richer would our church be if those who go into hospital chaplaincy could actually anoint the sick, or if those who do campus ministry could consecrate the Eucharist and preach at the retreats, or if those ministering to the incarcerated could offer the sacrament of reconciliation?

I know only a small segment of millennials who long to lead and serve their church but are barred from doing so because they are women, or LGBTQ, or do not have the rare charism of celibacy. But for the hundred or so that I do know, there are thousands more like them. The sacrifices they make to pursue their vocations and their longings and passions for ministry shatter the narrative that progressive young adult Catholics want nothing to do with the church.

So we must stop bemoaning the young Catholics who are not interested in the church and instead start to think creatively about how we offer this new generation of servant leaders the support that our institutional church will not give them.

Over the next few months, I'll be offering a series of profiles of young adult Catholic leaders who are founding intentional communities, finding new ways to live out their vocations and developing creative ways to do ministry, despite a radical lack of funding, affordable spaces and other resources.  Their stories will not only offer hope and a sense of how the progressive Catholic Church might be unfolding, they will also offer concrete examples of what kind of support these emerging leaders need to carry forward what is best in our Catholic tradition.

[Jamie L. Manson is a columnist and  books editor at NCR. She received her Master of Divinity degree from Yale Divinity School, where she studied Catholic theology and sexual ethics. Her email address is jmanson@ncronline.org. Follow her on Twitter @jamielmanson]

A version of this story appeared in the June 28-July 11, 2019 print issue under the headline: Young progressive Catholics do care about the church .

Column | Young progressive Catholics really do care about the church