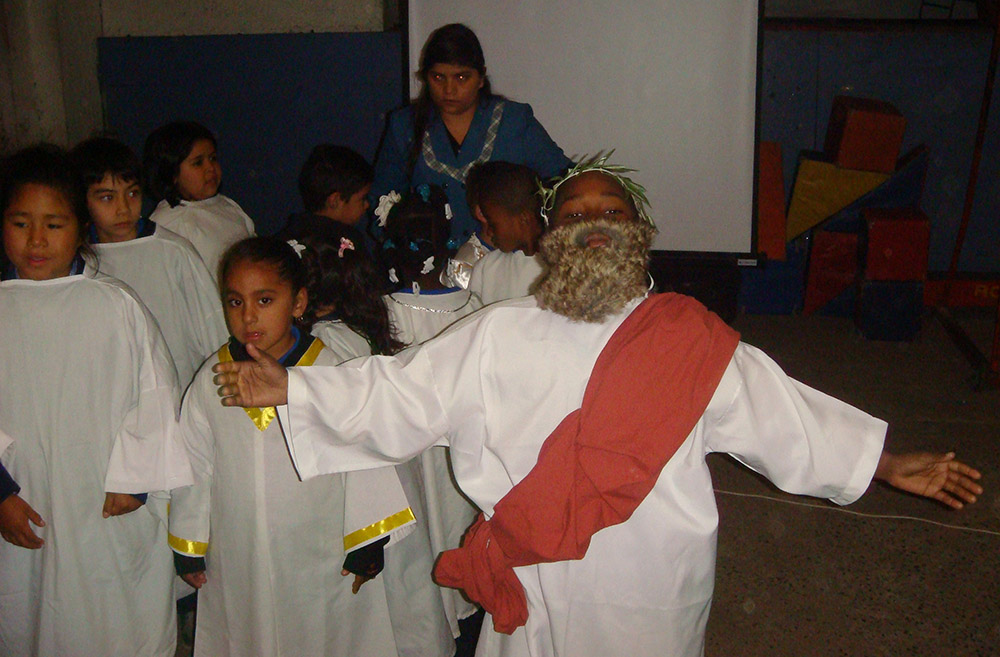 In 2014 in Santiago, Chile, student Elvis played the role of Jesus in Colegio San Alberto's re-enactment of the Last Supper. (Amy Ketner)

"But, Miss Amy, how can Jesus be Black?"

Startled by the question, I turned to the inquiring third-grader, wondering if I had misunderstood her Chilean Spanish or if she was making an insensitive joke. But in her face, I found deep sincerity. Montserrat genuinely wanted to know why this Jesus' skin tone did not match her own.

It was Semana Santa at a Catholic elementary in Santiago's poblaciones, where I was serving with the Jesuit Volunteer Corps. The student chosen to play Jesus in the school reenactment of the Last Supper was Elvis, a fourth-grader who was, indeed, Black. Elvis' family was one of thousands who had moved to Chile from the island of Hispaniola (Haiti and the Dominican Republic). Prior to their arrival, Chile's Black population had been nearly nonexistent.

The eyes of Montserrat beamed authentic curiosity, while her voice betrayed a rising defensiveness, as if fearing what it might mean if Jesus really could have been darker than she'd previously been led to believe. All around her, in the impoverished poblaciones where so many immigrants were settling, adult Chileans were also wrestling with changes. While they tried to be welcoming to their immigrant neighbors, many distrusted the Creole spoken on the streets and were frustrated at the new spicier food stands edging in among the panaderías and hot dog trucks.

Glares on the street and insults slurred in rapid-fire Spanish masked the fear these Chileans felt. Fear of losing the poblaciones' rich historical roots. Fear of the discomfort of communicating with their Creole-speaking neighbors. Fear that housing and employment opportunities could diminish. Fear that the world isn't exactly as they thought it was.

For one little girl, it was the fear that maybe Jesus didn't look or speak like a Chilean after all.

Eight years later, at a Catholic parish in Michigan, I saw this same fear flash across the face of an elderly Irish American man as he pointed to Daris but kept eye contact only with me: "She's been here for four years and still hasn't learned English!"

Daris, one of the founding leaders of our immigrant women's Circles of Support, had just shared the story of her flight out of Guatemala with her two daughters. Her harrowing tale included escaping a gang-affiliated abusive husband, and being kidnapped and held for ransom by a cartel in Mexico, and later detained for weeks by U.S. immigration authorities. 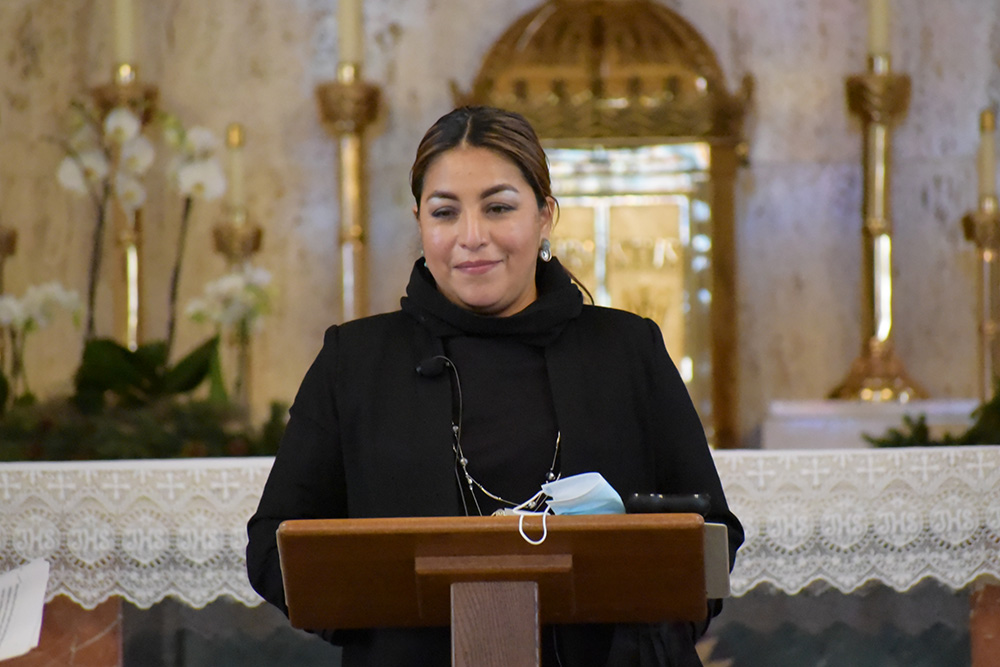 Before the student body of Divine Child High School in Dearborn, Michigan, Daris Bartolon shares about her flight out of Guatemala to seek asylum in the United States. Daris and other leaders of Strangers No Longer have shared their immigration stories with dozens of parishes, high schools and other community groups in the greater Detroit area. (Anthony Lakey)

Still, this man, let's call him Henry, latched on to one detail: Daris did not speak his language. He was so incensed that he had blocked out the rest of her story, which I had translated to the audience just minutes prior.

"Why didn't she just immigrate to another Spanish-speaking country?" Henry asked me, refusing to look at Daris. "Would you go to someplace where they didn't speak English if you had to move? Would you go to China?"

"Well, sir," I said. Deep breath. "You might recall from her story that she did try to go to a Spanish-speaking country — she fled to Mexico first — but her abusive ex-husband found her there. And it was in Mexico that she was kidnapped by cartels. She couldn't stay there."

On the conversation went, my breaths deepening with every retort from Henry. In the silence of my car ride home, I replayed his insistence that, because our European ancestors had learned English, so too should Daris.

I thought of my great-grandma speaking Polish with her sisters and cousins, even though she had been born in the United States and spoke English fluently.

I remembered stories I had been told of my quiet great-grandfather, who fled Hungary at the start of the First World War. At 19, he ran to a country he did not know, with a language he did not speak, so that he could safely start a family. He did this so that I might have life someday, just as Daris did for her children. He never did learn to speak English.

I thought of my Irish ancestors and wondered if they had ever met Henry's, the ones of whom he so passionately spoke. Did someone spew anger in their faces for speaking Gaelic, or English with a thick Irish brogue? For not assimilating quickly enough when they arrived to the United States?

When I was in high school, I attended a small youth group at my Catholic parish in Flint, Michigan. While we hailed from different high schools across the greater Flint area, we shared one thing in common: We were the misfits at our schools. The math club whiz, the anime artist, the painfully shy, the overly hyper, the goofballs.

A second unspoken truth my friends and I shared was that we showed up to youth group religiously because it was the one place we could bring our full selves: unapologetically quirky, loud, silly, inquisitive, emotional, unique. We could be authentic without fear of glares in the hallway or insults whispered across the lunch table.

Our youth minister showed us by example how to love ourselves and one another, how to "come as you are." Every Sunday, over pizza rolls and brownies, we formed a little tribe.

We threw ourselves into senseless icebreakers, ending in fits of laughter and dried spaghetti in our hair. We prayed as a group and planned our own retreats. We played bingo at the nursing home and served meals at the North End Soup Kitchen. In a judgement-free zone, we reflected together on the marvels of flirting and boyfriends, the heartbreak of lost friendship, the challenges of calculus, and the mystery of life-after-graduation. And through it all, we loved one another.

Outside of my own family, this family of youth group friends was my first tangible experience of unconditional love and acceptance. As we broke open Scripture, it was not hard to imagine the affirming, loving community Jesus had started with his disciples.

When I went away to college at the University of Michigan, I found a similar, albeit bigger, family at the parish on campus, deepening my assurance that this open-armed, radical love was what Jesus was going for with his young friends. These community values and experiences became the bricks on which my Catholic beliefs still stand today.

And so, when I looked into Montserrat's anxious eyes, and later into Henry's indignant eyes, these past experiences of communal love pulsed through me. I wanted Elvis and Daris to know the unconditional love of a welcoming, adoptive family. I longed for them, as immigrants and outsiders, to find acceptance in the Catholic community, as I had many times before. I wanted to help them build a haven from the fear and anger that surrounds them in their adopted homelands.

More than anything, I ached to welcome the little girl who wondered how Jesus could be Black and the elderly man who questioned why an immigrant still spoke Spanish into our misfit family, too.