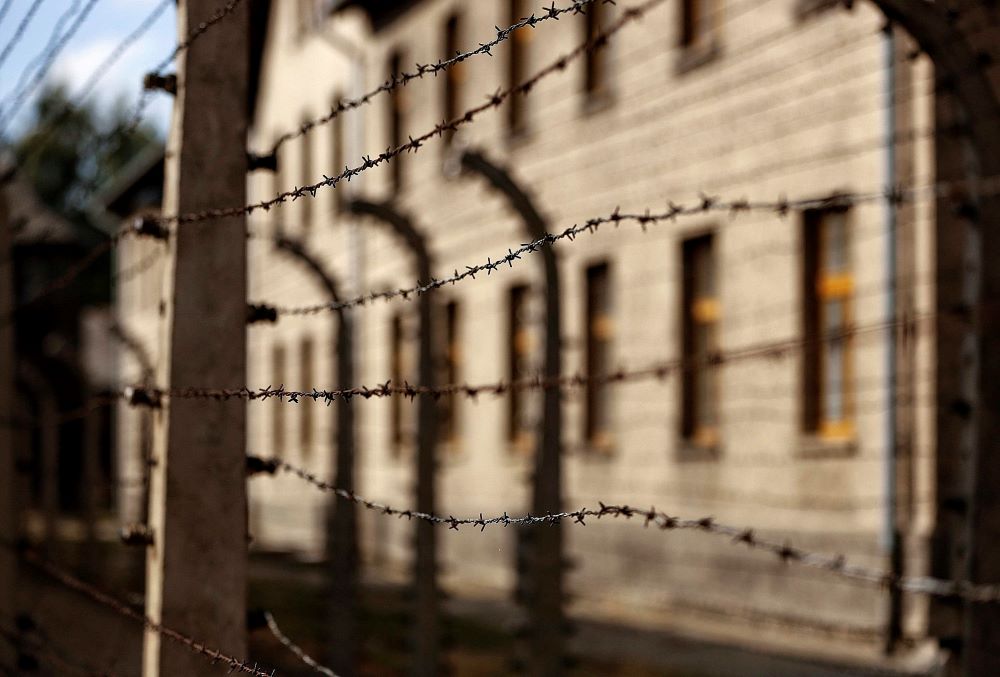 Editor's note: Jan. 27, the anniversary of the 1945 liberation of Auschwitz-Birkenau concentration camp, is International Holocaust Remembrance Day. The theme of this year's commemoration is "Memory, Dignity and Justice."

The destruction of European Jewry by the Germans and their local partners in each of Europe's countries was executed in three stages. The first stage began on June 22, 1941, when the Germans, in Operation Barbarossa, broke the Molotov-Ribbentrop Non-Aggression Pact and invaded the Union of Soviet Socialist Republic on a line running from the Baltic Sea in the north to the Black Sea in the south.

These four units murdered approximately 1.7 million Jews between June 24, 1941, and the beginning of winter 1942. Indeed, this first killing phase, called by some the Holocaust of Bullets, was undertaken and successful prior to the formal decision for the systematic Final Solution to the Jewish Question adopted at the Wansee Conference on January 20, 1942.

In the first phase the murderers came to the murdered, killing the Jewish people where they lived, in the sight of their neighbors and friends, and with the help of many local collaborators. The largest such mass urban murder site was Babi Yar on the outskirts of Kyiv, at which on Sept. 28 and 29, coinciding with Yom Kippur, 33,700 Jews were shot to death at the edge of a ravine, into which they fell and in which their bodies remained, until the Germans seeking to hide the evidence dug them up and burned them.

When the Germans realized how messy it was to shoot and murder so many people with so many others as eyewitness, leaving the evidence of the murders behind, they met on January 20, 1942, at the chalet on Gross am Wansee, where they developed the plans for the systematic and organized destruction of European Jewry. From that meeting came the second phase in the murder of the Jewish people, the Operation Reinhard Camps — Belzec, Sobibor and Treblinka.

In this second phase the murdered were brought to the murderers, who murdered them in these three secret camps hidden in Polish forests. The German placement of the death camps in Poland was a crime against Poland. This phase began in spring 1942 and culminated in early winter 1943. Approximately 1.8 million Jews were murdered.

The third and final stage of the destruction of European Jewry was Auschwitz, the mass killing center phase. In March 1944 the Germans looked southeast and saw hundreds of thousands of Jews still living in Hungary and Romania. To their dismay, Europe was not "Judenrein," cleansed of its Jews. So the boxcars began to roll into Auschwitz with their sacred human cargo by the tens of thousands. It was these boxcars that brought Elie Wiesel, as a teenager to Auschwitz. He would later chronicle the mass killing at Auschwitz in his legendary book, Night.

It is important that Auschwitz not become a metonym, a substitute name or symbol, for the Holocaust, for the destruction of the 6 million Jews of Europe. By the time the Germans began murdering the 1.1 million Jews of Auschwitz, nearly 4.5 million Jews had already been murdered, most of them with the help of Lithuanians, Latvians, Estonians, Belorussians and Ukrainians in the USSR. 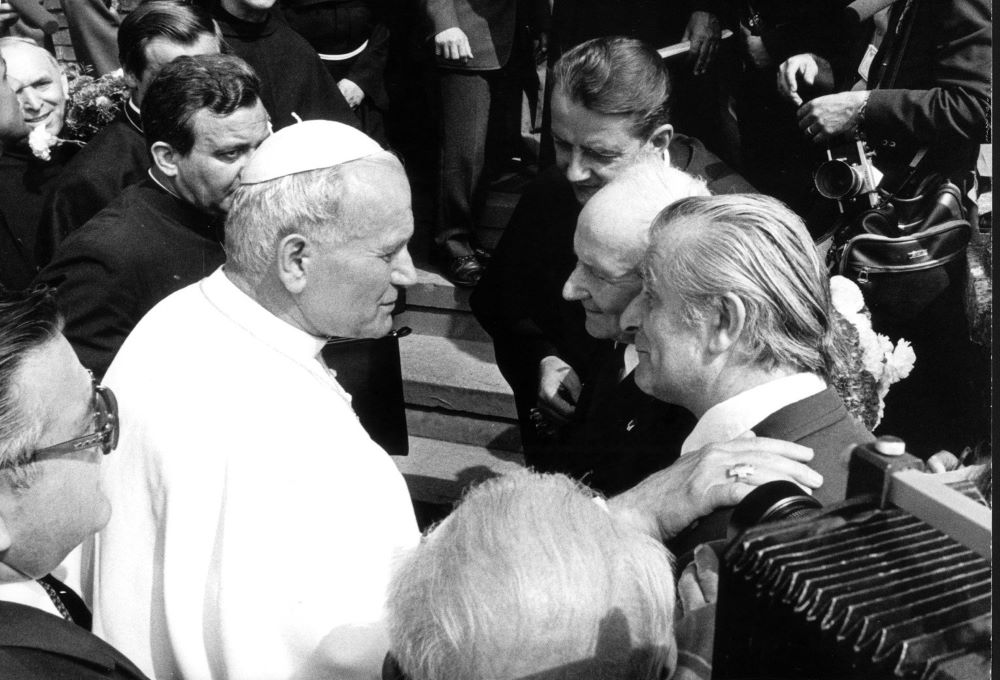 Pope John Paul II greets Franciszek Gajowniczek, second from right, at the Nazi-German Auschwitz prison camp in this 1979 file photo. Gajowniczek, who shared a cellblock with St. Maximilian Kolbe, escaped execution at the camp when Kolbe died in his place. Gajowniczek died March 13, 1995, at age 93. (CNS)

Three popes have made pilgrimages of memorial to Auschwitz. The first was John Paul II in 1979, when he made the historic return visit to his Polish homeland just six months after being elected pope. In Birkenau, the mass killing facility of Auschwitz, a memorial plaza features nearly two dozen plaques inscribed with each of the languages of those murdered at Auschwitz. John Paul II paused at the Hebrew language memorial plaque, to the memory of the Jewish victims of Auschwitz, and said:

In particular I pause with you, dear participants in this encounter, before the inscription in Hebrew. This inscription awakens the memory of the People whose sons and daughters were intended for total extermination. This People draws its origin from Abraham, our father in faith … The very people that received from God the commandment "Thou shalt not murder", itself experienced in a special measure what is meant by murder. It is not permissible for anyone to pass by this inscription with indifference.

This was a remarkable statement because at that time it was the policy of the Communist countries directed by the Soviet Union, "the evil empire," to erase the record of the destruction of European Jewry and the murder of 6 million Jews. For the Communist regimes, the destruction of European Jewry was an act perpetrated by Western fascist capitalist society against the proletariat of the world. Indeed, in 1979 when John Paul II made pilgrimage to Auschwitz, he would have noticed that there was very little mention of the fact that more than a million Jews were murdered there. Thus, his statement was a bold one. His statement was a direct challenge of witness to the Communist authorities of Poland and the Soviet Union. 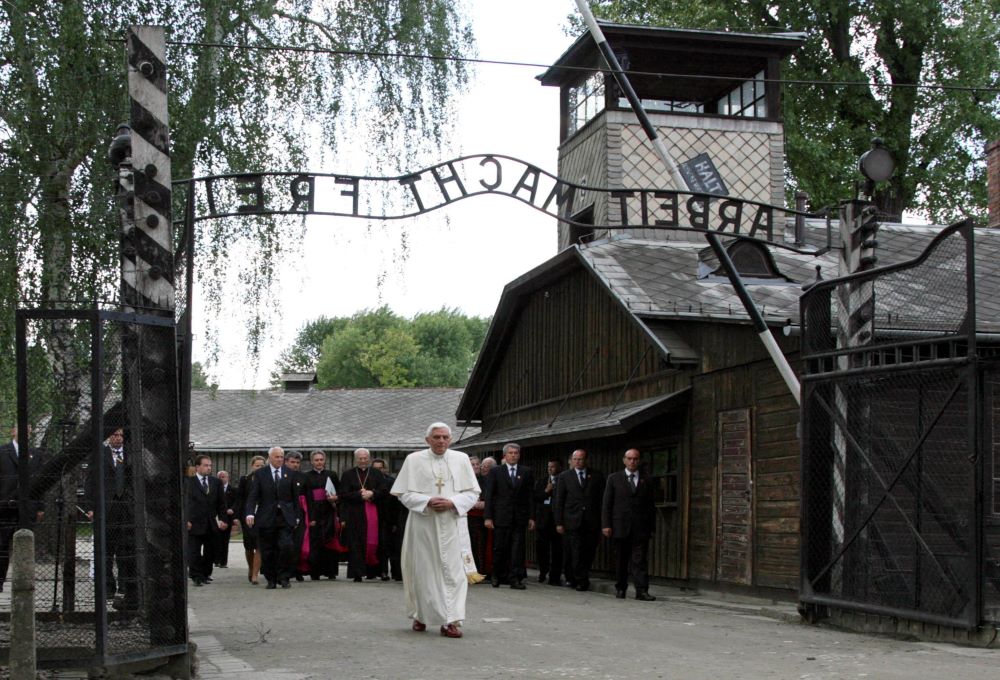 Pope Benedict XVI walks through the gate of Auschwitz in this May 28, 2006, file photo. (CNS/Reuters/Pawel Kopczynski)

The second pope to visit Auschwitz was Benedict XVI. On April 19, 2005, Joseph Cardinal Ratzinger was elected pope. On May 28, 2006, he, too, made a pilgrimage of memorial to Birkenau. Like Pope John Paul II, Pope Benedict XVI paused in front of the Hebrew memorial inscription to the Jews murdered in Birkenau and said:

There is one (inscription) in Hebrew. The rulers of the Third Reich wanted to crush the entire Jewish people, to cancel it from the register of the peoples of the earth. Thus the words of the Psalm: “We are being killed, accounted as sheep for the slaughter” were fulfilled in a terrifying way… Those vicious criminals, by wiping out this people, wanted to kill the God who called Abraham, who spoke on Sinai and laid down principles to serve as a guide for mankind, principles that are eternally valid. If this people, by its very existence, was a witness to the God who spoke to humanity and took us to himself, then that God finally had to die… By destroying Israel, by the Shoah, they ultimately wanted to tear up the taproot of the Christian faith…

This is an astonishing statement. For in this statement Pope Benedict XVI declared that the genocide of the Jewish people was unique among genocides. It was a deicide. It was an attempt by the German Nazis to murder not just the Jewish people, but if one dare utters it, to murder God Himself.

As Benedict said, "Those vicious criminals … wanted to kill God who called Abraham," the father of the Jewish people, and God "who spoke on Sinai" to the Jewish people. He affirmed that God dwells in Israel's midst, as it is written in scripture: "And they shall know that I the LORD am their God, who brought them out from the land of Egypt that I might dwell in their midst …" (Exodus 29:46). To annihilate Israel is to murder God who is in their midst and abides with them.

It is impossible to overstate the theological significance of Benedict's statement. Benedict gives witness to the world that 2,000 years after the Jewish people did not accept Jesus of Nazareth as their redeemer, nonetheless, God's Presence is manifest in this world in People Israel. To add any further word of explanation about this statement is to detract from the purity of its import. 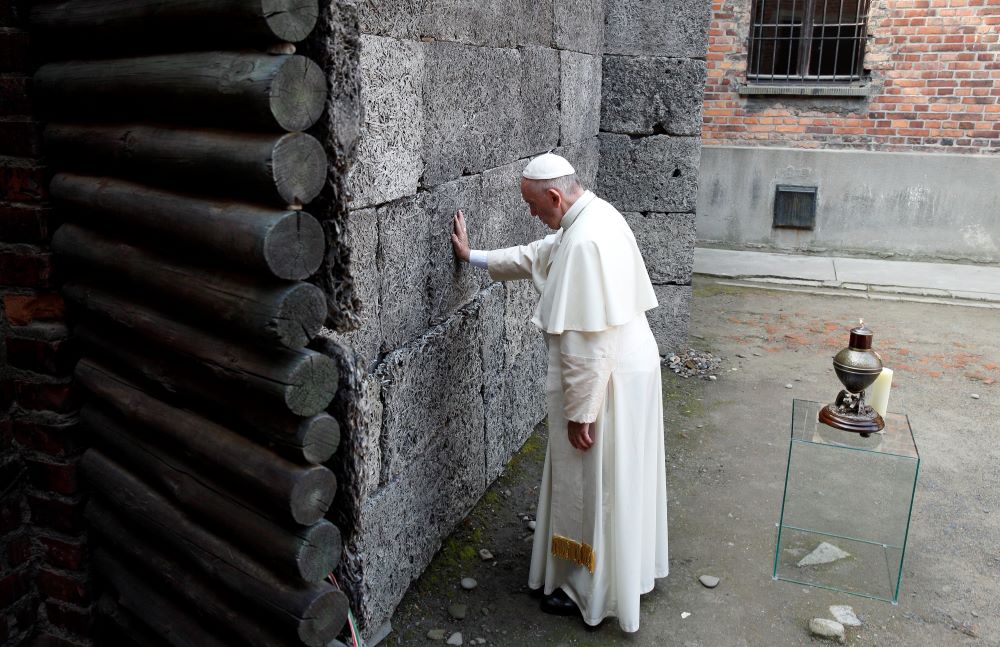 The third pope to visit Auschwitz is Francis, whose pilgrimage and witness builds upon the teachings of these two remarkable papal visits. What did Francis add? He took a great lesson from a mysterious incident in Leviticus, Chapter 10. On the day the Tabernacle was dedicated by Moses and Aaron, two sons of Aaron, Nadav and Avihu, were consumed by the fire in the Tabernacle. Scripture records Aaron's reaction: "and Aaron was silent."

This man, Francis, came to Auschwitz in silence. He stood and sat in Auschwitz in silence and solitude. Though many traveled with him, his witness at Auschwitz was in solitude. He sat by himself and uttered not a word. He sought to become one with those whose voices were silenced, with those whose voices still come to us from beyond the storm. In his solitude and silence Francis did not permit his voice to fill the vacuum created by the murder of 6 million Jews. His silence allowed the Jewish victims murdered in Auschwitz and Europe to speak for themselves. In so doing, Francis established Holocaust remembrance as an indispensable component of Catholic religious consciousness.

Mark well the pattern of these three papal witnesses. John Paul II identified the victim, singled out for particular measure of evil, the Jewish people. Benedict named and taught the nature of the sin. The Holocaust was not just genocide. It was deicide, an attempt to "murder" the God of Israel, if one dare speaks thus. The first papal visit identified the victim. The second papal visit defined the sin. The third papal visit taught the way of remembrance.

Related: Francis warns: 75 years after Holocaust, guard against 'any whiff' of anti-Semitism
Related: A rabbi reflects on the Law, the Pharisees and 'our friend' Francis