If you hear that Catholics want to deny Biden Communion, check the details 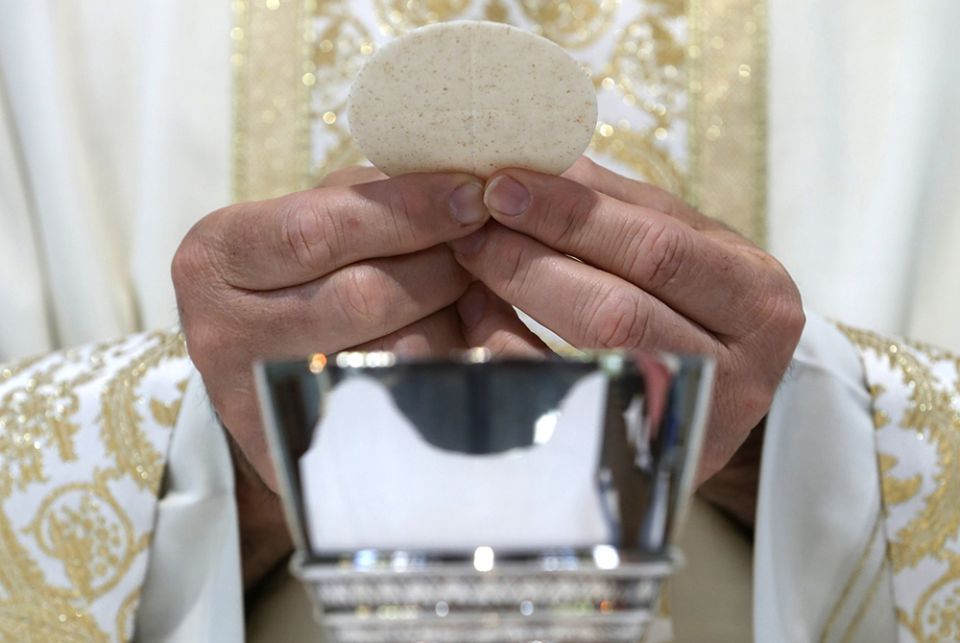 A priest holds the Eucharist in this illustration. (CNS/Bob Roller)

Conservative media was recently buzzing with headlines proclaiming that huge majorities of American Catholics think President Joe Biden, a Catholic, should be denied Communion because of his pro-choice policy position.

But there are big problems with these headlines and the poll that produced them. For one, CatholicVote.org, the right-wing Catholic group that conducted the poll, did not actually ask respondents what the bishops should do about Biden given his stance on abortion, but rather what decision "public officials" should make for themselves when they publicly disagree with church teaching.

Had the words "Biden" and "abortion" been in the question, the results may have looked quite different (as they do in other polling).

Second, the pollsters engaged in the discredited practice of priming, by asking a series of leading questions prior to the main one. The survey, in other words, was poorly designed in a way that would surely maximize the number of respondents agreeing with CatholicVote's favored finding.

Finally, the sample is far from representative of the population of church-going Catholics when compared, for example, to other recent surveys conducted by EWTN or the Knights of Columbus. It is a much wealthier, more educated and more suburban group than one would expect from a truly random or representative sample. This may again partially explain why its results are vastly different from what Pew found just a couple of months ago. (Namely, that U.S. Catholics are divided by political party about the issue of Biden and Communion).

It is obvious why the poll was commissioned, given the comments by CatholicVote.org's president Brian Burch, who noted: "This polling data should bolster the confidence of Catholic bishops. ... The data is very clear: Bishops have an obligation to act."

But if Burch wanted to know if observant Catholics think the bishops should deny Biden and pro-choice politicians Communion, why didn't the poll he commissioned just ask this question? It is not as though the pollsters were shy about referring to the bishops elsewhere, because there are many other questions specifically about what bishops should do.

The survey's use of priming, which is eschewed by nearly all professional polling organizations because it biases any survey's results, is clear.

For example, the CatholicVote.org poll asked if respondents know that the "Catholic Church has long taught that certain issues are of grave moral importance, such as abortion." It followed by asking whether "Catholic bishops should speak out when a powerful Catholic publicly advocates for a grave moral evil?" and whether "a Catholic bishop is failing to do his job as a bishop if he doesn't speak up about grave moral evils?" It went on like this for more than 10 questions until the survey arrived at its apparent purpose.

Even despite the priming and nebulous phrasing, the results are less eye-popping than suggested.

While it is true that 74% of respondents agreed at some level that "Catholic public officials who disagree with their Church on serious or grave matters, should avoid creating confusion and disunity by not presenting themselves for communion," more than half the sample either disagreed or only "somewhat" agreed.

What could be the cause of this hesitation among even those who otherwise agree? Could it be they are wary about politicizing the Eucharist over polemical issues such as abortion rights?

CatholicVote.org's Burch anticipated criticism of the poll, but mostly over the sample being narrowly constructed to only include Catholics who attend Mass regularly. This, however, is not the problem. There is nothing wrong with trying to find out what this particular population thinks on important issues regarding the church. The problem is that CatholicVote asked the question in such a way that the results do not support the conclusion that the group is reporting.

When Pew asked a more direct and relevant question about whether specifically "Biden" should be "allowed to receive Communion," only 40% of weekly Mass attendees said no. That is 34 points lower than what others are now claiming based on CatholicVote's poll. This massive difference is surely in large part due to the fact that the question of whether an unnamed politician should theoretically present oneself for Communion is not the same as whether the bishops should actually withhold Communion from Biden himself.

CatholicVote's finding is even more suspect given that the demographics are far from the population averages for observant Catholics, particularly on education and income. It is not necessarily clear in what direction this would bias results. More educated and wealthier citizens are more likely to be pro-choice, but they are also less likely to have abortions, as noted in several surveys.

There may be a modifying effect in which wealthier, educated church-going Catholics are less tolerant of politicians who support positions opposed by the church. In any case, we cannot confidently draw inferences from a small sample to a large population if that sample looks quite different from the population it is meant to represent.

Finally, the survey results grabbing all the attention are hard to reconcile with other findings in the same poll. For example, respondents are also asked if Biden is doing a good job as president. In a poll of observant Catholics who largely think the bishops should deny the president Communion, you might expect his approval numbers to be pretty low. But 56% say he's doing just fine. Go figure.

If we are to trust CatholicVote's poll, an odd conclusion seems to be that most Mass-going Catholics respect Biden, despite his pro-choice position. I doubt that's the finding CatholicVote was hoping for.

[Scott Liebertz is an assistant professor of political science and criminal justice at the University of South Alabama. His writing has appeared in The Washington Post, The Hill, and First Things, as well as in several peer-reviewed academic journals.]

Commentary | If you hear that Catholics want to deny Biden Communion, check the details

Editorial: Don't put your faith in the bishops' conference