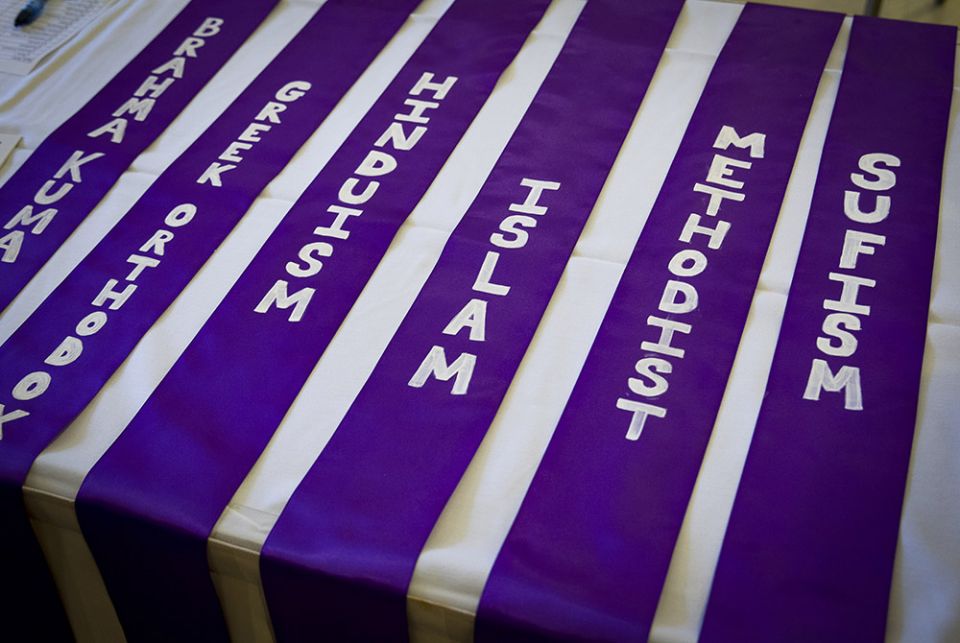 The names of different religions are lined up near a registration table for the annual Unity Walk Sept. 21, 2014, in Washington. (CNS/Tyler Orburn) 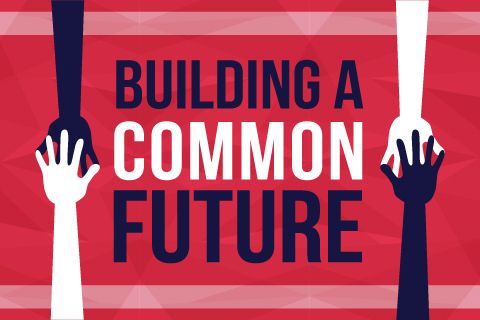 This essay is an edited excerpt from "A Time to Heal, A Time to Build," a report of the Brookings Institution.

Our nation is more divided than it has to be. It is both possible and urgent to reduce polarization, division, and the tensions they create.

Religion defines only one dimension of our coming apart, but it is the source of some of our deepest divisions. A president cannot instantly alter the underlying forces of division but he (and, someday, she) can acknowledge that the weaponization of faith for political purposes is dangerous to the nation's long-term stability; give fellow citizens across religious traditions and religious divides evidence that their views and concerns are being taken into account, even when their policy preferences are not enacted into law; and take seriously the powerful contributions that religious groups make to problem-solving and community-building as part of the United States' vibrant civil society — while also honoring work done in this sphere by secular and resolutely nonreligious institutions working on behalf of charity and justice.

The beginning of Joe Biden's presidency is a time to defend the American idea of pluralism that has been under attack for the past four years, and to insist that no matter how individuals worship or how they identify religiously, "they will count as full and equal American citizens," as Justice Elena Kagan has said. Our country must make a new start on issues related to religion.

Questions related to religion are often embedded in urgent issues such as public health and education. Mishandling church-state issues (often because they have been overlooked) can be terribly damaging, both to religious freedom and to a president's other projects. You might say that even when public officials are not particularly interested in religion, religion will find a way to be interested in them.

Beyond our specific ideas, we hope to spark a better, more inclusive and less fractious conversation around these questions. Such a conversation could open with Martin Luther King Jr.'s observation that the church "is not to be the master or the servant of the state, but the conscience of the state." What King said applies to all religious traditions. We urge an effort to restore and advance the American tradition of pluralism and to call on all of us to honor each other's dignity. 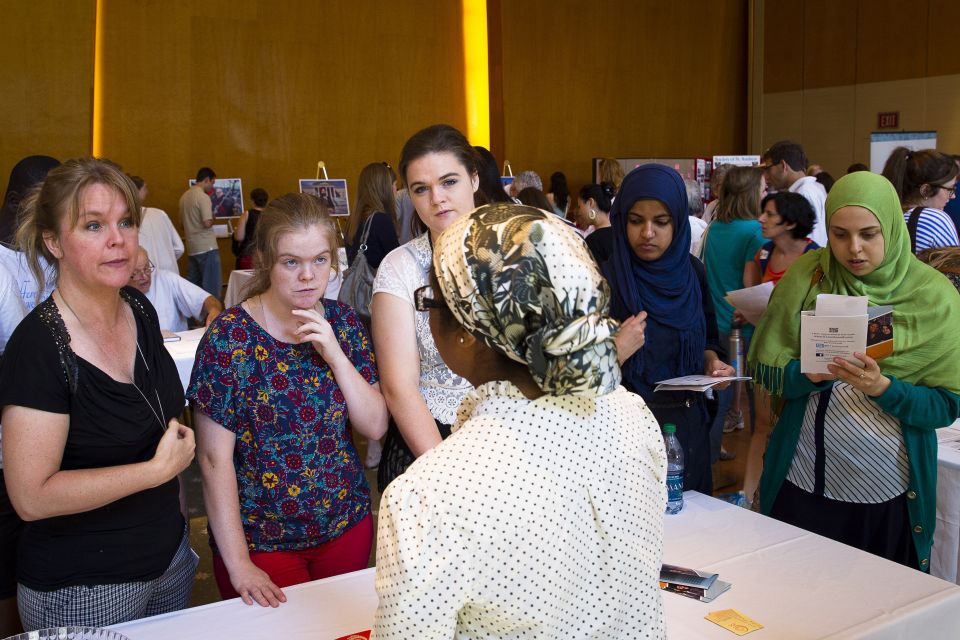 Women of different faiths get information about other religions during the annual Unity Walk Sept. 21, 2014, in Washington. (CNS/Tyler Orburn)

Our country is confronting a pandemic, the scourge of systemic racism, a deep economic recession, and a dangerously warming planet. At the outset, the president should recognize the work of community-serving leaders and organizations, both religious and nonreligious — and seek their help to move forward.

The next administration should relaunch partnerships with nongovernmental organizations, both faith-based and secular, that played an important role in both the George W. Bush and Barack Obama years. The aim of a partnership's initiative must be clear. The mission of the initiative is serving people in need. Working with religious and secular organizations is the means to achieve that mission. The mission should not be promoting faith — that is the job of religious institutions and individuals. No religion should be preferred over others, and nonreligious communities, including intentionally secular groups, must be equally eligible for partnerships.

In light of the racial disparities the COVID-19 crisis has revealed, one focal point for partnerships should involve addressing such inequities across a wide variety of fields, including health, education, economic opportunity and criminal justice. An effort to remedy the nation's racial injustices may provide a path for healing some of our divisions around religion even as the quest for racial justice might also bring home the ways in which religious bodies themselves have been complicit in racism and discrimination.

The Obama administration was not able to forge complete consensus regarding the church-state rules that apply to these partnerships, but it was able to find common ground on some key issues and reduce certain tensions in this area. The next administration should seek to revive this approach. 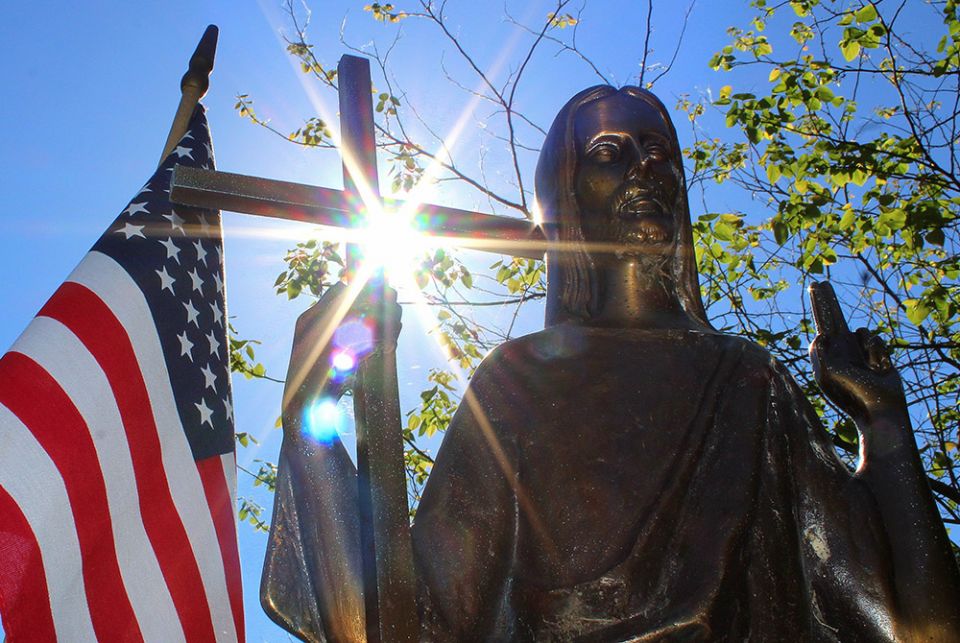 We can differ on school vouchers but surely agree on the urgent need to stop the genocide of Uighur Muslims in China, the persecution of Christians in many parts of the Middle East, the spike in anti-Semitism worldwide, and the persecution of the Rohingya Muslims in Myanmar — and address other egregious religious freedom violations. The next administration should make every effort to work with leaders and groups across the philosophical spectrum to support an end to oppression rooted in religious conflict.

People are being held in prisons today in some nations simply because of their faith or beliefs. Certain governments single out members of particular religious communities for persecution and abuse, and some have been subjected to genocide and other crimes against humanity. Many countries threaten citizens with jail time — and even execution — for criticizing an established faith. Because of their religious beliefs and affiliations, individuals are sometimes barred from holding public office and exercising other civil and human rights. Some countries require religious groups to register with the government and get approval for houses of worship and religious materials. In many places around the globe, missionary activities are legally prohibited, as is the wearing of religious clothing or symbols at work or in public schools. In 2019, the Pew Research Center reported that 52 governments around the world either place "high" or "very high" levels of restrictions on religion.

Recognizing religion's role in foreign policy and international development reflects both the necessity of this work and its constitutionality. We cannot understand our nation or world without understanding religion. Statecraft must recognize that fact. Doing so is not unconstitutional. To this end, the president should direct the secretary of state to reestablish the department's Office of Religion and Global Affairs.

Promoting freedom of religion and belief abroad is not simply an altruistic task; it is also a national security objective. Advancing religious freedom should be part of a larger human rights agenda. The Biden administration should include an expert on freedom of religion within the staff of the National Security Council and should strengthen efforts to ensure that all diplomats are trained on international human rights issues, including religious freedom, and that cultural literacy programs be linked to religious literacy.

In addressing religious freedom at home, we urge the ending of policies reflecting or motivated by religious bias, and protecting the right to practice faith without fear. The next administration must restore trust between the government and religious minorities. The Department of Justice should promptly review and revise its religious liberty guidance, and it should also review a series of executive actions of recent years that failed to adequately balance the legitimate interests of all stakeholders.

We urge the Biden administration to affirm a robust role for religion in the public square and to help Americans better understand their rights in this area by highlighting consensus statements about church-state law. Yet they should beware of selectivity in free exercise matters. Remember that the government can't take sides in theological debates.

Even the words "religious freedom" have become toxic in recent years, meaning they shut down conversations at least as often as they open them up. The Biden administration can't solve this problem by itself, but it can take steps to encourage Americans to talk and listen to one another on these questions. During the transition period, the next administration should hold listening sessions about specific church-state matters it will need to resolve.

The United States' motto E pluribus unum — out of many, one — remains a sure guide for a pluralistic nation that respects both particularity and common purpose. It reminds us that the first word of our Constitution is "We," and that every generation is called upon to take up the struggle to make the Constitution's "We" genuinely inclusive of every American.

[Melissa Rogers is a visiting professor at Wake Forest University Divinity School and a nonresident senior fellow in governance studies at the Brookings Institution. From 2013 to 2017, she served as special assistant to then President Barack Obama and executive director of the White House Office of Faith-based and Neighborhood Partnerships.

E.J. Dionne Jr. is a senior fellow at the Brookings Institution, a syndicated columnist for The Washington Post, and university professor in the foundations of democracy and culture at Georgetown University's McCourt School of Public Policy and visiting professor in Religion and Political Culture at Harvard University.]