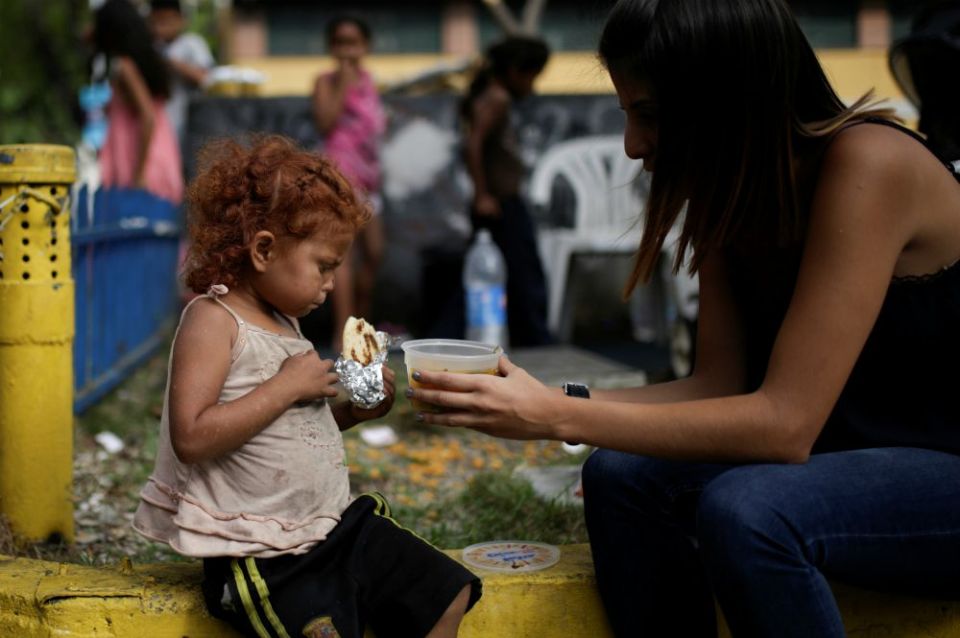 A volunteer with "Make the Difference" charity initiative gives a cup of soup and an arepa to a homeless child along a street in Caracas, Venezuela, in March 2017. (CNS/Reuters/Marco Bello)

Sometimes you have to wonder if the whole world has gone crazy.

The World Factbook states some 150,000 people die every day. Too many die due to inadequate food, shelter and/or water. Too many die in a maelstrom of bullets sent forth by a military force or an unhinged civilian. Statistics trace the great majority of childhood deaths to poverty, specifically to diarrhea, sepsis or infectious disease.

Somehow, too many pundits and politicians missed the memo. The national, even international conversation, is about money and markets. I do not deny the connection between poverty and the economy, but moving the Dow Jones Industrial Average up or down a point or three does not concern you when you have nothing to eat.

The better, even more immediate connection is between climate change and poverty. Poor people, truly poor people in the underdeveloped world, live close to the rising waters' edge. The next hurricane or typhoon will end their neighborhoods and perhaps their lives.

But for the developed world's pundits and politicians, the discussion is not about people who are poor. It's about themselves. As our collapsing world writhes in pain, they break out in Twitter wars. They prove they care only about themselves as they shoot angry barbs at each other and any other attractive target. For what? Did their self-worth advance on the backs of whatever ethnic or religious or racial group they find unworthy? Did they gain a point or two in some poll or another by supporting the National Rifle Association? Did they improve their imagined media profiles?

Sticks and stones break bones, but words really do hurt. In fact, these days, words propel sticks and stones. Anger, pushed forward by repulsive rhetoric, moves blind action along the spectrum, from bullying to fist fights to mob activity to mass shootings.

It has to stop. It has to stop now. When some 600 members of the U.S. Leadership Conference of Women Religious signed on to an open letter to President Donald Trump in mid-August, they asked him — they beseeched him — to "end all divisive and polarizing rhetoric." They asked him, directly, not to "use language that disrespects, dehumanizes, or demonizes others."

I understand how pundits and politicians want to control the narrative, I really do. But the parents walking thousands of miles with their children whom they hope to feed and clothe in some safe territory, or the people braving open seas in leaking boats hoping for a chance to live and work somewhere, anywhere, safely, are not migrants. They are refugees, fleeing situations not one individual pronouncing in the Twitterverse could even imagine.

I think it's time to change the rhetoric. The people we see, against whom borders are closed and barriers are built, are not migrants. These poorly-clothed, undernourished, frightened individuals are refugees. They are human beings, made in the image and likeness of God. They cannot return to their homelands for reasons we can only fathom. They should not, they cannot be demonized.

The United Nations counts only 25.9 million persons officially as "refugees," on every continent. Even when under the temporary protection of the United Nations High Commissioner for Refugees, these homeless, stateless persons are not safe.

But there are 244 million — nearly a quarter billion — people on the move worldwide, called migrants. Their situations are equally bad. They flee drug wars and famine and landslides and worse.

Are too many knocking at your national border? Are they the wrong color, the wrong religion, the wrong race? Which will you pick to turn away?

P.S. In case you missed it, fire destroyed or damaged 1,200 slum shacks in Dhaka, the capital of Bangladesh, in mid-August. They say 10,000 people are now homeless, their plastic and tin shanties in ruins.

[Phyllis Zagano is senior research associate-in-residence at Hofstra University in Hempstead, New York. She will speak Friday, Sept. 13 at the Bishop Keane Institute of Immaculate Conception Church in Hampton, Virginia, and Tuesday, Sept. 24 at the Boisi Center for Religion and American Public Life at Boston College. Her books include Women Deacons: Past, Present, Future, recently published in France and Canada as Des femmes diacres and in Portugal as Mulheres diáconos: Passado, presente, futuro. Study guides are available for free download at people.hofstra.edu/Phyllis_Zagano.]

A version of this story appeared in the Oct 4-17, 2019 print issue under the headline: People are suffering, dying; stop the rhetoric! .

Our common home needs you on the frontline today