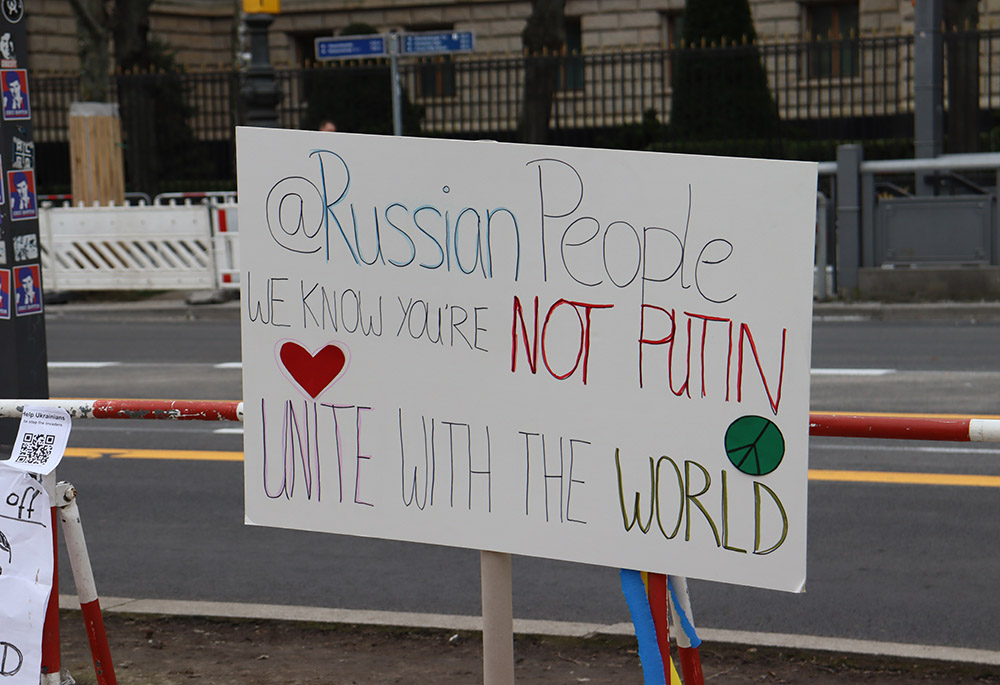 A sign decrying Vladimir Putin and the war in Ukraine is seen outside the Russian Embassy in Berlin March 4. (NCR photo/Teresa Malcolm)

Last week, I wrote about a truly rare event, when Pope Francis removed Bishop Daniel Fernández Torres of Arecibo, Puerto Rico, after the bishop refused to resign. I speculated that he might become a hero to the alt-right Catholic fringe and, bingo, LifeSiteNews has published an article about people supporting the "faithful bishop" and who are complaining to the Vatican about the decision to remove him.

Relatedly, our friends at Jubilee USA have posted a letter signed by 26 religious leaders in Puerto Rico, who thank all those who worked to effect the recent bankruptcy settlement, but point to the need for additional funding to combat child poverty, prioritize economic development and sustainable energy sources, achieve parity with the mainland U.S. in terms of funding for programs like Medicaid and Medicare, and other important social justice goals.

At Foreign Affairs, Paul Berman has an excellent analysis of Russian President Vladimir Putin, the historical context from which Putin seeks to draw his prejudices but which have so far failed to yield a coherent account of his intentions. Berman's takedown of realism toward the end of the piece is exactly on point: " 'Realism,' in short, is a principal of intellectual fog, which claims to be a principle of intellectual lucidity." Brilliant and brilliantly written.

While the world stands in horror at the unprovoked war against Ukraine, and seeks ways to stigmatize the Russian government and cripple its ability to prosecute the war, most companies have shut down their operations in Russia. But not Koch Industries, the conglomerate led by Charles Koch, who was feted by the Catholic University of America for his contribution to the business school. Judd Legum at Popular Information looks at the silence or worse coming from three Koch-owned companies with business in Russia, as well as the way Koch uses money to influence think tanks in Washington.

At Vox, senior correspondent Ian Millhiser looks at the U.S. Supreme Court's opportunity to overturn one of its worst decisions, the 2001 decision in Circuit City v. Adams. That ruling stripped most workers of their right to sue their employer, requiring workers to enter into "forced arbitration" arrangements. The high court will hear arguments in three cases this month that allow them to reconsider that decision. It would be good for the cause of labor if they do so.

In The New York Times, culture reporter Javier Hernández profiles Vladyslav Buialskyi, the young bass-baritone who is singing with the Metropolitan Opera in New York City. The singer's mother is still in Ukraine, caring for his grandmother in an area under attack by Russian troops. Multiply the heartache of his story times 44 million and you begin to measure the evil of this war.

Also in the Times, Miami bureau chief Patricia Mazzei explains the rift that has grown between Florida Gov. Ron DeSantis and Miami Archbishop Thomas Wenski over the church's commitment to caring for migrants, which has helped generations of Cuban migrants who are one of the Sunshine State's most powerful constituencies. The fight between the archbishop and the governor has spilled over into the Cuban community, which is not a bad thing: Diversity within communities helps clarify the limits of identity politics and excessive nationalism. Kudos to Wenski for showing that the church is not tied to any political party or national narrative.

Cardinal Sean O'Malley recently delivered the Msgr. Corbett Lecture at the Shrine of the Most Blessed Sacrament in Washington, D.C. The cardinal spoke about the Holy Father's beautiful encyclicals, and he offered a powerful reflection on the need to overcome the spiritual disease of racism. The hilarious Cardinal Sean also recalled the scandal surrounding Rep. Wilbur Mills, who jumped into the Tidal Basin with an exotic dancer near the Jefferson Memorial when their car was pulled over. I had completely forgotten the incident until he mentioned it. Mills, who was from Arkansas, blamed the scandal on his "cavorting with foreigners." O'Malley goes on to talk about his 20 years working with immigrants in D.C.

At ArchDaily, a look at the architecture of rural retreats and why minimalist modernism seems so ideally suited to the genre. The author, understandably, does not view these beautiful buildings through the lens of Laudato Si', but I do: Our aesthetic, like our other human faculties, need to find ways to see ourselves as part of nature, not above it or outside it. What is more, they are beautiful!