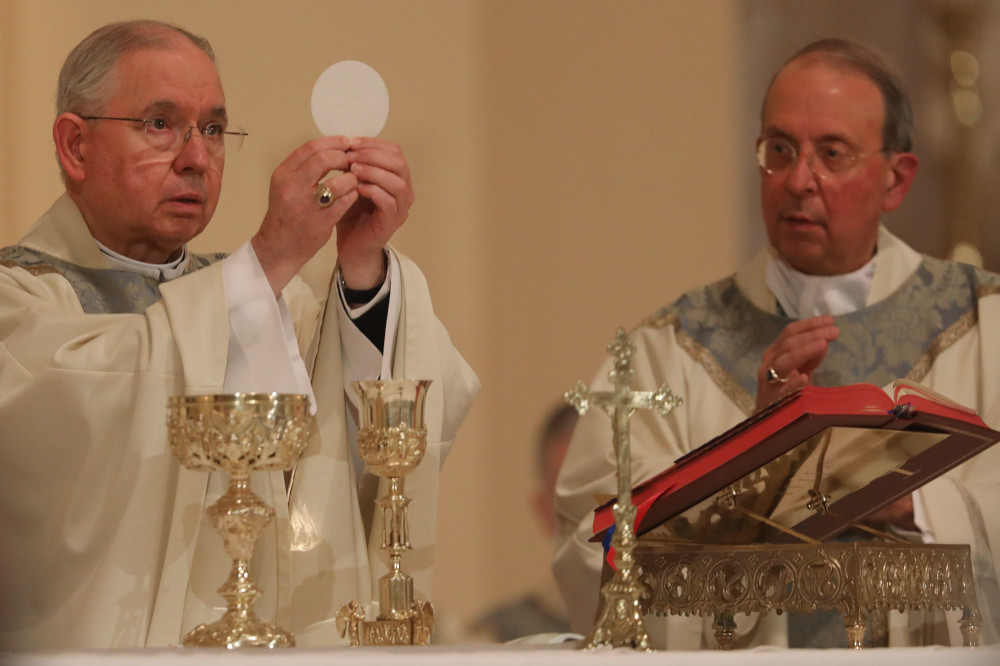 Archbishop José Gomez of Los Angeles, president of the U.S. Conference of Catholic Bishops, concelebrates Mass with Archbishop William Lori of Baltimore at the Basilica of the National Shrine of the Assumption of the Blessed Virgin Mary Nov. 15 in Baltimore during the bishops' fall general assembly. (CNS/Bob Roller)

You have to admire the chutzpah of the editors at the National Catholic Register. They published an editorial that insists on calling the recent document approved by the U.S. bishops a "teaching document," but it isn't that. Teaching documents not only require approval by two-thirds vote, but also the approbation of the Holy See. Canon 455 states:

Can. 455 §1. A conference of bishops can only issue general decrees in cases where universal law has prescribed it or a special mandate of the Apostolic See has established it either motu proprio or at the request of the conference itself.

§2. The decrees mentioned in §1, in order to be enacted validly in a plenary meeting, must be passed by at least a two thirds vote of the prelates who belong to the conference and possess a deliberative vote. They do not obtain binding force unless they have been legitimately promulgated after having been reviewed by the Apostolic See.

But the bishops were told that this document did not need to be sent to the Holy See. At least the Register admitted what conference president Archbishop José Gomez denied, that this document was the fruit of the working group he set up to confront the prospect of a Catholic president. Gomez seems to forget that in the memo he sent to the bishops on Jan. 19, 2020, accompanying the unfortunate statement he issued the next day when President Joe Biden was sworn in, Gomez wrote that the working group had proposed two initiatives, the first being the Inauguration Day statement. Then he added:

The second initiative was for the Conference to work on a document that clearly lays out the teaching of the Church on the importance of Eucharist coherence or consistency — including the fact that our relationship with Christ is not strictly a private affair.

At Religion News Service, Mark Silk picks up on the GOP Ohio Senate primary to look at the mixed history of the term "Judeo-Christian," which was useful in combatting Nazi anti-Semitic views in the 1930s and "godless Communism" in the 1950s but has become shorthand for a kind of conservative public moralism the past 40 years. History reveals a valuable lesson here: An idea will likely be used for different purposes, some of them unhappy so humility is always advisable.

The Catholic Labor Network hosted an excellent panel to commemorate the 35th anniversary of the U.S. bishops' document "Economic Justice for All." The panel featured Jesuit Fr. David Hollenbach, who worked on the text, Roxana Bendezu of Pax Christi USA and Migrant Roots Media, and Meghan Clark, an associate professor at St. John's University. Much of what we know as "the Catholic right" was born in opposition to the document, something to remember the next time a conservative Catholic talks about the need to stand up to the culture. Incidentally, "Economic Justice for All" is an authentic teaching document. I am so thrilled about the work Clayton Sinyai is doing at the Catholic Labor Network.

Relatedly, The Kellogg Company has announced it plans to hire permanent replacement workers to fill the spots of striking employees, a significant escalation. Time for customers to boycott the company's products. ABC News has the story.

Gerrymandering has been with us since the founding of the republic, the name derived from Elbridge Gerry, a signer of the Declaration of Independence and vice president to James Madison. But computer programs and demographic modeling have elevated the art of gerrymandering into a science that is part of the reason democracy is in such bad shape. The Washington Post looks at the elimination of competitive swing districts by state legislatures of both parties.

The Asamblea Eclesial is under way in Mexico City this week, bringing together for the first time the bishops of the Latin American bishops' conferences, CELAM, with lay faithful, religious and priests. This is the first continent-wide meeting since Aparecida in 2007. Here is a video of the official hymn for the gathering.

It is Thanksgiving and in English, the Te Deum is the hymn "Holy God, We Praise Thy Name." Here it is sung by the always splendid choir at the First-Plymouth Congregational Church in Lincoln, Nebraska. He who sings prays twice!