Cardinal-elect was a Francis bishop before Francis 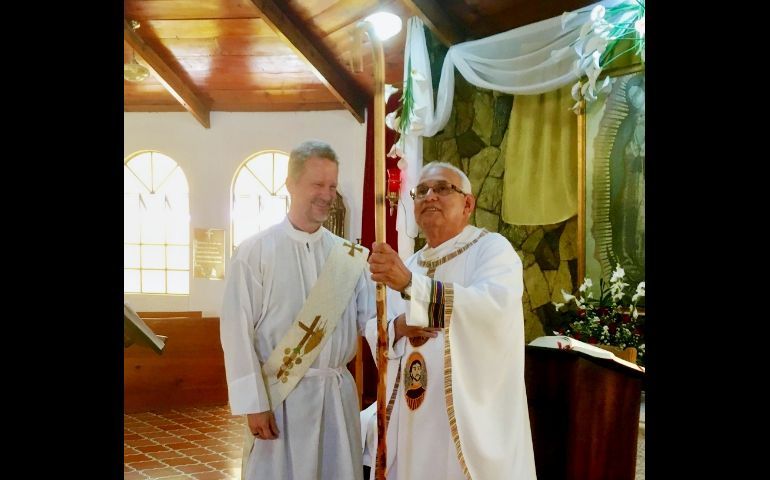 In this May 2017 photo, Deacon Nate Bacon, left, presents the gift of a crosier to Bishop Alvaro Ramazzini, right, of Huehuetenango, Guatemala. (Photo courtesy of Poor Clare Monastery of Our Lady of Guadalupe, Huehuetenango)

As the calendar turned to September, Pope Francis, relatively quiet and out of the limelight during the heart of the summer, resurfaced with big news — the appointment of 13 new cardinals, choices that make clear he intends to use that papal prerogative to reshape the hierarchical culture at that elite level.

Check out Vatican Correspondent Joshua McElwee's report on the appointments for more detail.

One of the choices that leapt off the list to my attention was Archbishop Matteo Zuppi of Bologna, who wrote a forward to Jesuit Fr. James Martin's book, Building a Bridge: How the Catholic Church and the LGBT Community Can Enter into a Relationship of Respect, Compassion, and Sensitivity. It is likely that such an endorsement (and far less) would have been an episcopal career stopper not long ago.

But the name that really jumped out at me was Bishop Alvaro Ramazzini of Huehuetenango, with whom I spent a day during a reporting trip to Guatemala in 2013. Western Guatemala, with all of its stunning natural beauty, is not a normal stop on an upwardly mobile career in the church. It is easy to say — and I have said it — that Ramazzini was a Francis bishop before Francis came along. In a sense, that's true. But he was appointed a bishop of the Diocese of San Marcos, near Guatemala's western border with Mexico, in 1988 by Pope John Paul II. In 2012, he was transferred to become bishop of Huehuetenango by Pope Benedict XVI. So quite literally he was a John Paul II and Benedict XVI bishop long before the Francis papacy. It is dangerous, I know, to try to draw too many straight lines in this sprawling, and often unpredictable, church.

Ramazzini, who went a somewhat traditional route, earning a doctorate in canon law from the Gregorianum in Rome, and serving as rector of the major seminary in Guatemala, was apparently deeply affected by his ministry amid the poor and indigenous populations far from the urban reality of Guatemala City, where he grew up.

He became a public advocate for justice, particularly among the country's indigenous population. That population, especially in the area of Huehuetenango, had been marginalized, tortured and targeted for killing in massive numbers during the short regime of Efraín Ríos Montt in the early 1980s.

Ramazzini took on foreign mining concerns for destroying water supplies, and the day I spent with him, traveled two hours to a neighboring diocese to be part of a panel during a public meeting regarding a case brought by indigenous people against the police, who had shot and killed six and injured 40 during a protest of  utility rate increases. Ramazzini himself has survived several death threats apparently linked to his opposition to mining and huge hydro-electric projects and for his advocacy of human rights.

I was introduced to Ramazzini by a long-time friend, Dennis Smith, a Presbyterian lay missioner, who has several times helped me as an interpreter and analyst since my first visit to Guatemala in November of 1981. He knew the bishop through ecumenical activities in Guatemala, where Smith lived for decades.

You can read the full account of my time with Ramazzini here. In the context of the recent appointment, however, a few things he said remain remarkably relevant. Of his more than a quarter of a century as a bishop at that time, he said: "All of these years have been an experience of learning, gathering additional knowledge, of dialogue, because for me an important part of being a bishop is knowing how to listen, to pay attention to what people are saying. … I think a bishop truly needs to be an expert at listening."

He regrets the fading of indigenous symbols, practice and language that have for centuries been integral to life in the area of Guatemala where he has long served as bishop. He said he would like to see Mayans pass on "their way of understanding their relationship with God," adding that he has discovered in indigenous communities "a vital, existential religious experience that helps them to understand that the divine is present in every moment of their lives."

This, I surmise, is a canonist who's had the sharp edges of the law rubbed smooth by experience. Two Augustinian priests were resident at St. Michael Archangel parish where the public meeting was held, so I was at first disbelieving when they said the parish had 100,000 members in 53 distinct communities served by 3,000 lay ministers. I look at Ramazzini as if to say, "Am I hearing correctly?" He confirmed the numbers and said that in his diocese, more than 10,000 lay ministers worked in parishes.

It wasn't the first time that I wondered if those in the developing world – that ecclesiology that's never had "enough" priests by standards of the Northeast and Upper Midwest in the United States – is actually providing the model for the future. We're seeing the development of a college of cardinals from Haiti, Indonesia, throughout Africa, now from rural Guatemala, individuals who may have made a stop in Rome along the way but whose vision of church and understanding of pastoral needs were not formed in the prim environments of Paris or Dublin or Boston.

Long-time friend Paul Jeffrey, a United Methodist minister and accomplished journalist whose reporting has graced these pages for years, has an illuminating Ramazzini story that he said I could pass along.

I got to know Ramazzini when I lived in Central America, particularly when I lived in Guatemala. … He became my go to guy for insight into political struggles in the region, and whether I called him on the phone late at night or knocked uninvited on the door of his simple house in San Marcos, he always greeted me warmly and responded patiently to my questions. His insights were critically important for Recovering Memory, the book I wrote on the role of the church in the Guatemalan peace process. …

Yet what first comes to my mind about Ramazzini is a chance encounter with him on a mountain road in Guatemala, long before I sought him out as a journalist. I was driving west into the highlands from Guatemala City with Nate Zook Barge, the country director of the Mennonite Central Committee. On a steep curvy section of road, the pickup truck in front of us, its back filled with people, failed to negotiate a turn and sailed off a cliff. We immediately stopped and along with other people who stopped began climbing down to the crash site, rendering first aid, and pulling some of the survivors back up to the highway.

I clearly remember one man whose leg had been smashed and was bleeding badly. We got him up to the road, and I stopped a west-bound pickup and begged them to take the guy to a hospital down the hill in Solola. The driver agreed to do it, and we loaded the guy in. The bleeding was so severe that I had placed a tourniquet on his thigh, and I instructed the driver to hurry, and to tell the hospital staff where we had applied the tourniquet. I told the driver to get going, but he sat there looking at me. I said to go, but he insisted I come along. "If I show up with this guy at the hospital, the police will arrest me," he said. "But because you're a foreigner, if you come along nothing will happen."

I didn't want to go back to Solola. It was out of the way, and I wanted to get home to Xela, where I lived. So I hemmed and hawed. At that point a man I didn't know, one of the people who had stopped and helped render first aid, heard the conversation. He asked what was going on, and then quickly responded that he would go. He was also headed west, but he jumped in his jeep and turned it around, and followed the pickup truck down the hill to Solola.

After we did what we could at the crash site, Nate and I continued our journey west. As we recounted what had happened, I mentioned the guy, who wore a black shirt — a clergy shirt without the white collar tab. "That was Bishop Ramazzini," said Nate, who had been in the country for a few years. "He's the bishop of San Marcos."

A version of this story appeared in the Sept 20-Oct 3, 2019 print issue under the headline: It's about how we see God .

Opinion | Cardinal-elect was a Francis bishop before Francis