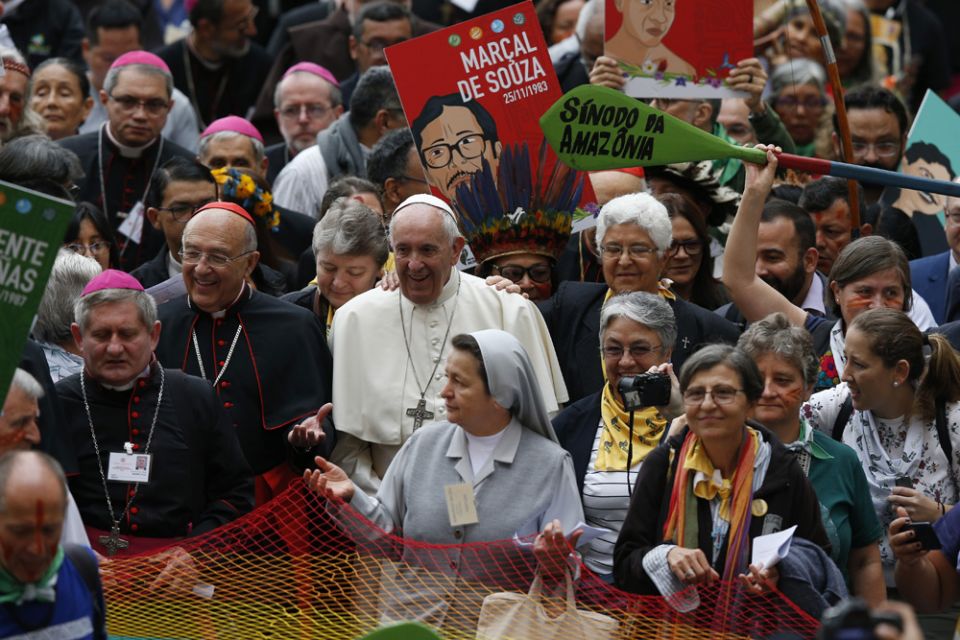 Pope Francis walks in a procession at the start of the first session of the Synod of Bishops for the Amazon Oct. 7 at the Vatican. (CNS/Paul Haring)

For an institution that has no clear processes in place to effect change (indeed, it is an institution that, in some imaginations, cannot change), there was a mashup of evidence during recent weeks in Rome that some significant change is, in fact, under way.

A consistory during which 13 new cardinals were created — more than a few from territories that don't normally produce red hats — was backed up against the beginning of a synod during which a host of controversial issues will be discussed, all preceded by a well-publicized meeting between Pope Francis and Jesuit Fr. James Martin, who has become the most public clerical advocate for LGBT members of the church.

Yes, that last one was the easiest to read as a change, at least in the attitude of the papacy — an unambiguous message of papal favor for a priest who has become a favorite target of the Catholic right in the United States. That clarity aside, there are remaining ambiguities and we treat those in an editorial. But the bottom line: The pope and a pro-LGBT advocate, a priest nonetheless, have a half-hour meeting and the priest comes out smiling, saying this was one of the "highlights" of his life. A new day, indeed.

In the pre-Francis era, the ranks of new bishops and, especially, new cardinals, were more often than not filled by what former NCR colleague John Allen termed "border patrol" bishops, clerics whose priority concerns were things like creeping relativism, the assault of secularism and loss of Catholic identity. Preserving absolute beliefs and clear Catholic identity often meant focusing on rigorous application of the law and conservative practices, and diligent maintenance of the borders to keep the doubters and questioners at bay.

Francis changed the metaphor for the community from maintaining borders — and stoking the fears that made them so essential — to a community on a journey, with the significant work of the individual more a matter of encounter and accompaniment than judgment. From the very start, his language has been full of movement. Adherence to the law takes a back seat to such attributes of God as mercy and compassion. The community shouldn't be static and bound too tightly. Instead, it should move, and push to the margins, even if, in doing so, the borders change and become less well defined. Francis has taken John Paul II's admonishment, "Be not afraid!" to new levels and in new directions. He welcomes bold conversation, debate, and the messiness that comes with a less-than-absolute approach to accompanying a flock that's free to wander. In that mix, of course, he also has to tolerate shocking resistance from extreme corners of the community. It comes with the approach.

Please check out Joshua McElwee's coverage of both the consistory and the opening of the synod, and savor the bold challenges to the new cardinals and to the bishops of the Amazon region to not be afraid of change. The language is stunning, the opening to new ways of conceiving church a rediscovery of the fresh air of that reform council, Vatican II, that may be reaching a new level of fulfillment a half century later.

Allow me a slight variation from the normal Connections protocol to encourage you to connect with a remarkable interview of Fr. David Tracy in the most recent edition of Commonweal by long-time religion journalist and author Kenneth L. Woodward.

Tracy, an exquisite and internationally renowned thinker and teacher, sat for the long interview ahead of publication of two new collections of essays by the University of Chicago Press. The conversation explores Tracy's latest work, his fascination with "fragments"; it contains long explanations of his interfaith explorations and his experience teaching with those of other disciplines. And there's a magnificent answer to Woodward's incisive question: "What would you say to someone who asked: 'David Tracy, do you believe that Christ is the one way of salvation?' " This is a piece that deserves wide circulation in the Catholic community.

She was one of three women who received the 2019 Hillary Rodham Clinton Awards for advancing women in peace and security. The awards are given annually by the Georgetown Institute for Women, Peace and Security, headed by Ambassador Melanne Verveer. Another recipient during the Sept. 27 event at Georgetown University was Michelle Bachelet, twice-elected president of Chile and appointed last year as United Nations high commissioner for human rights. The third recipient was Virginia Martes Velásquez of Honduras, founder of the Movimiento de Mujeres de la Colonia López Arellano, an organization that provides legal and psychological services to women survivors of violence.

Anaya presents a particularly compelling tale of immigration as a path to safety from violence, to healing, and ultimately the safe haven that provides a way back to her home country. She is the daughter of two people the Georgetown Institute describes as "giants of Salvadoran human rights history: her father authored the authoritative report on torture in prisons during the country's civil war and her mother was the second woman in the country to serve as Supreme Court Justice." Her involvement in human rights began as a teenager, chosen to speak to the United Nations General Assembly about children's rights, particularly in war zones.

Her work in restorative justice in prisons began with an encounter with one of the men in prison for participating in the killing of the four U.S. churchwomen in El Salvador in 1980.

She said in that moment, she couldn't bear to think of him as a human being "because in my head he had done this terrible thing." She said she went home and questioned herself, questioned whether she really believed that every person deserved the right to a second chance.

"It was one of the hardest things I had to do in my life because then I started to think about what I think about the person who assassinated my father. And in that thought, I started to realize that if we are going to change anything in our country we need to go to the root causes." She knew the political, economic and social considerations, but also came to understand that if individuals were unable "to create conditions for reconciliation based on truth, based on real justice and not impunity, it is going to be hard for any of the economic and structural policies to actually change."

Her experience of the United States came first as a youngster who came for treatment every few years following an accident in El Salvador. She came with her family via Canada in 1987, the year her father was killed. They returned to El Salvador in 1992, but "they tried to kill my mom," so the family returned to California.

Less than a year later, they returned to El Salvador. She's been there since, working with youth and pioneering restorative justice programs in prisons. The long history of violence in the country, she said, is rooted in poverty, in the violence in which the U.S. played a historic role and in the current conditions where there is little opportunity and the next generations are living on the streets.

Is restorative justice a pipe dream in terms of the larger culture? "Government is people," she responded. "It is not just an abstract idea; buildings don't make government. People make policies. And so for those human beings who make decisions to have in their minds what it means to create reconciliation and not fuel revenge, I don't know until then if we're going to be able to move forward in other aspects of life. But to bring that to scale, we need to start little."

A version of this story appeared in the Oct 18-31, 2019 print issue under the headline: Taking 'Be not afraid!' to new levels .