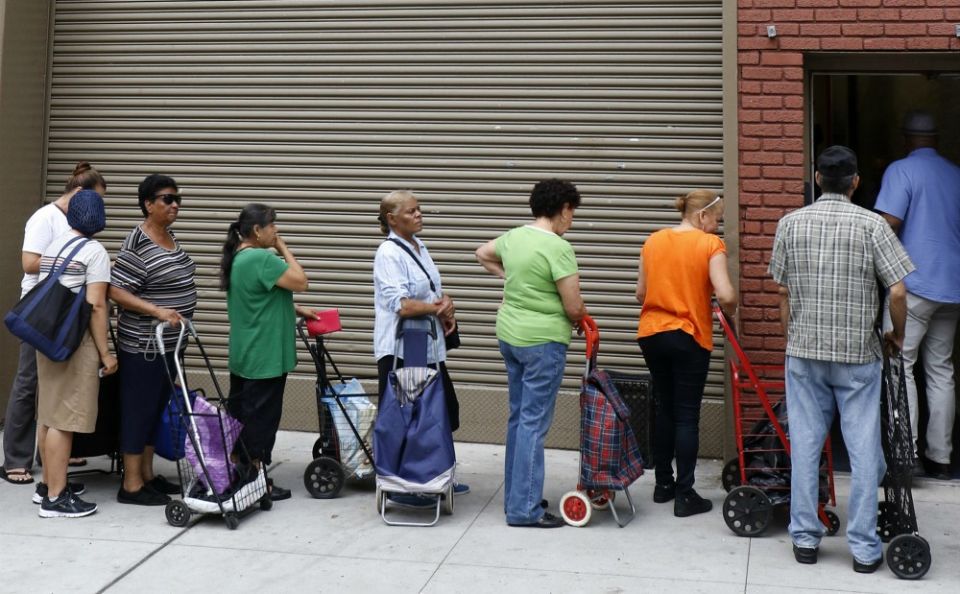 People wait to enter a food pantry at Catholic Charities of the Archdiocese of New York's community center in the South Bronx July 14, 2016. The chairmen of the U.S. bishops' committees on domestic policy, international policy and education said in a Nov. 9 letter to lawmakers that the current draft of the House of Representatives tax reform bill raises income taxes on the working poor and gives a large tax cut to the wealthy. (CNS/Gregory A. Shemitz)

President Donald Trump and the Republicans in Washington have no shame. They have no compassion for the American people other than the very rich and large corporations. They are also hypocrites about issues of morality. They have no morals. They are opportunists who swing in any direction as long as it keeps them in power.

They are anathema to American democracy. This is clear on two fronts.

One is the tax bills being prepared by the U.S. House of Representatives and Senate. Although these bills have some differences in detail, they are the same in benefiting the super-rich and giving breaks, money to everyone else. By cutting corporate taxes and reducing them for rich individuals and families, Trump and the Republicans show where their true loyalties are. They are the party of privilege and power and not as they try to suggest as the party of the middle- or working-class Americans, many of whom foolishly voted for Trump.

The tax bills go right after middle-class deductions, such as on state and local taxes and property taxes. These deductions are the mainstay of middle-class people and help them not to have to pay exorbitant federal tax rates.

But to pay and compensate for the tax cuts for the rich, which will balloon the deficit, Trump and Republicans have to find a way to compensate by taking deductions from the rest of us. This is class warfare that exposes the lie about an America where everyone can find equal opportunity. This has never been quite the case and is certainly not true today. Economic and income inequality have never been greater, and the Republican tax bills will only widen this gap. This is immoral and unpatriotic.

The second example of immorality and hypocrisy is the Republican reaction to the case of students and others who have Deferred Action for Childhood Arrival (DACA) status. I have several of these students in my class, and they are as American as any other student. I had one come to see me the other day. She spoke perfect English and was brought to the U.S. by her parents as a child. She has only known one country — the United States. Yet Trump and the Republicans are harassing people like her and exploiting them by threatening to terminate the DACA program that President Barack Obama started to give these young people an opportunity to legalize their status and not fear being deported.

Trump and the Republicans would end all of this. This is a form of terrorism against these young Americans. I call them Americans because that's what they are. It is immoral and un-Christian to deport them or to threaten them. What about family values that the Republicans are always proclaiming? Where are family values when these actions would separate family members by deportations, and what about American values of fairness and justice when Trump and Republicans would deny these young people a stake in what is also their country? So once again they will go to church on Sunday and pretend how moral and righteous they are and how Christian they are while they again look the other way. Have they no shame? True Christians and true Catholics have to call out Trump and the Republicans for their hypocrisy on their tax giveaways to the rich and their callous treatment of young people who have DACA status. But will they?

Can Trump and the GOP win with tax reform?