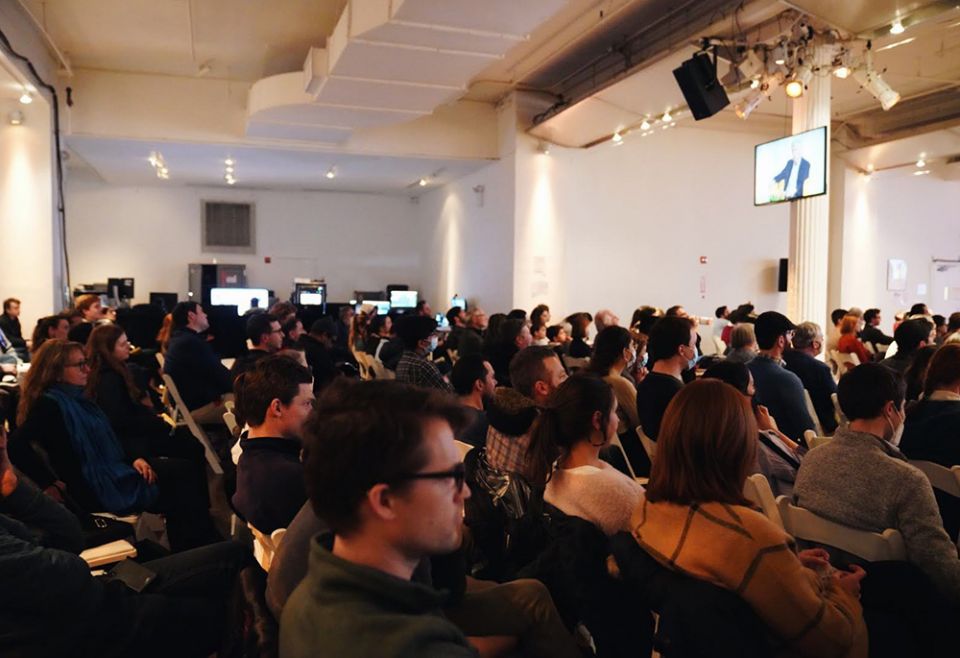 New York — The imperative to regain trust in science in the midst of the COVID-19 pandemic was a recurring theme at this year's New York Encounter, an annual cultural event organized by the Communion and Liberation lay movement. But even as participants gathered Feb. 18-20 for talks, conversations and food inside the Metropolitan Pavilion, the divisiveness that can be an impediment to "This Urge for the Truth" — the year's theme — was evident.

Protesters from a group called "Catholic Renegades" handed out leaflets criticizing the event's theme (placing the word "Truth" in scare quotes) and its claim to be " 'free' and 'open' to the public," given the city's vaccination requirement to enter public events. One attendee said the protesters encouraged her to refuse to show her vaccination card upon entering.

But the speakers inside did not shy away from exploring the disconnectedness and animus of distrust among Americans during the past two years of the coronavirus and social unrest.

"How did we get here?" asked Francis Collins, former director of the National Institutes of Health, who has worked closely with Dr. Anthony Fauci on combating COVID-19. Collins cited the Trump presidency and the decline in religiosity and church attendance, among several other factors. 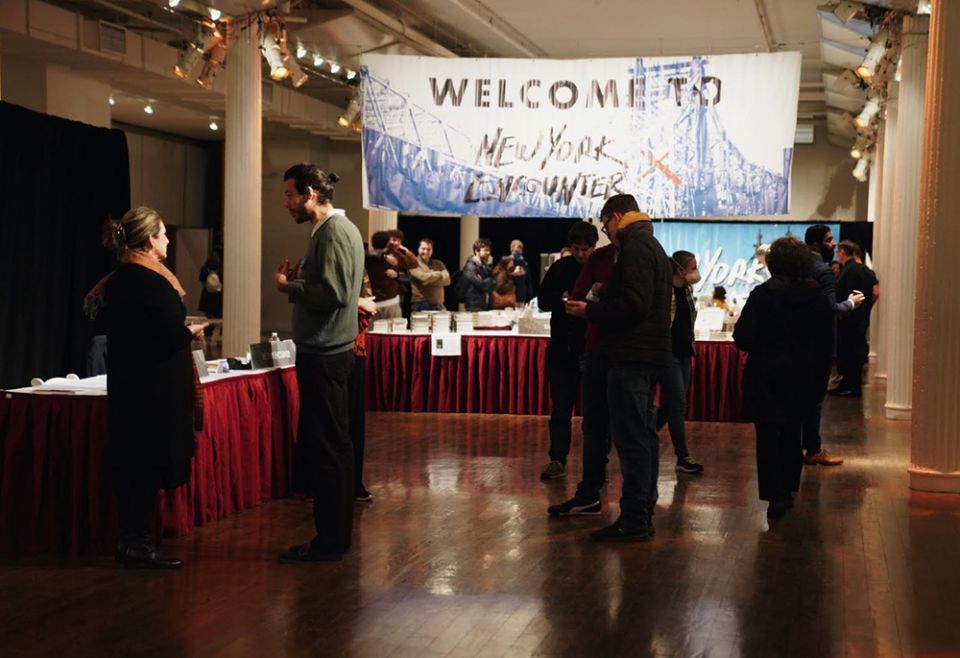 Attendees gather for New York Encounter Feb 19 inside the Metropolitan Pavilion in New York. "This Urge for the Truth" was the year's theme for the annual cultural event. (Mariagustina Fabara Martinez)

Collins joined New York Times columnist David Brooks in a panel titled, "Can We Ever Know What Is Real?" Brooks attributed distrust in media and science to a reaction to class divisions in America, which he has written about for years.

He termed it "an inherited meritocratic Brahmin class."

"And that class has economically drifted away from the rest of the country," he said. "They … I should say 'we,' have excessive influence over the media, universities, and the culture. And a lot of people look at that class and say, 'Those people have too much power. And they don't respect me, so screw them.' "

So how do we move forward? The solution they proposed wasn't necessarily "scientific" in nature. The main resources we have at our disposal to foster unity and mutual trust again is discussing morality and spiritual growth more openly.

The New York Encounter itself could be seen as one such opportunity for discussion of moral and spiritual growth. 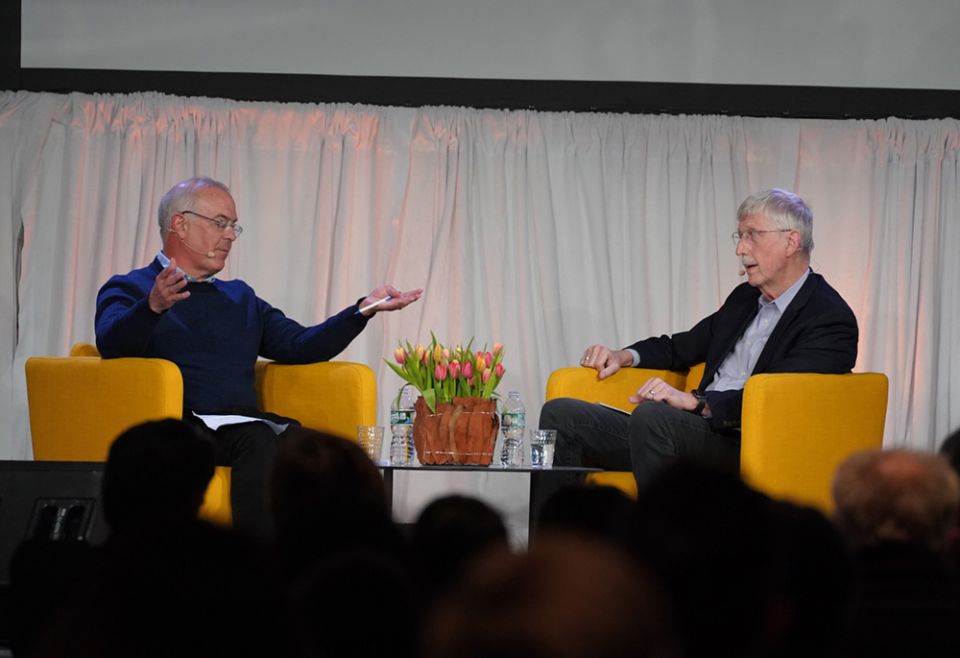 David Brooks, left, and Francis Collins speak during the panel "Can We Ever Know What Is Real?" Feb. 19 during New York Encounter. (Mariagustina Fabara Martinez)

The Encounter's reputation has grown since its more humble beginnings on a single floor rented out in the Marriott Marquis in Times Square in 2010, to its 2020 edition at the Metropolitan Pavilion located in the posh Chelsea neighborhood of Manhattan, when it reportedly hosted more than 3,000 attendees. Due to COVID-19 restrictions, the 2021 edition livestreamed its panels, performances, and exhibit presentations, in addition to hosting virtual happy hours and meet-and-greets with panel speakers.

This year's "Encounter" was held in person once again at the Metropolitan Pavilion, while maintaining the COVID precautions mandated by the city of New York.

"We all felt the need to try to be together in person again, while offering streaming for those who can't travel to New York," said Patrick Tomassi, a high school teacher based in Portland, who has worked on organizing the New York Encounter since his college years.

"The New York Encounter is just that, an encounter," he said. "There is a palpable life, not just during the events, but especially between events, in the food court and the lobby. This is something that there is no online substitute for. So we've been watching the COVID situation closely, and looking for ways to be together as safely as possible."

As always, the event was open to the public and free of charge, as it is funded completely by donations and is run almost entirely by volunteers, many of whom travel to New York from across the country.

"The main feature of the Encounter is its graciousness," says Angelo Sala, one of the event's founders, who works as an accountant in Manhattan. "Nobody pays at the entrance and nobody is asked to 'join' anything. Nobody is paid to organize it, to run it, and almost nobody is paid to speak. We are well aware that the most important and beautiful things in life are unexpected gifts, and we want to freely give what we freely receive."

Sala remembers a past visitor commenting to him that "if people were paid to do all of this, there wouldn't be so many smiles all around this place."

Several of the attendees who traveled from outside of New York City were high school and college-aged students.

Stefano Tasso, a high school student from Boston, volunteered so he could attend and "learn about the topics being discussed at the presentations … about culture and social issues [which] is really important to me and helps me to connect with different kinds of people."

Ada Teichmann got involved in CL after a friend at her high school in upstate New York invited her to a meeting. "I'm not really a religious person, but I wanted to come this weekend because I think there are a lot of lessons to be learned from hearing about these topics and from getting to meet people from different places and backgrounds."

This year's theme, taken from a line in Nietzsche's The Gay Science, focused on how, after the pandemic and social unrest of the last two years, many of us "feel both trapped in our certitudes and afraid of the unexpected. We are left dissatisfied, with the nagging feeling that we are losing ourselves. And yet, a subtle, relentless desire for what is true remains."

The theme's description proceeded to ask, "Can we ever know what is real and who is trustworthy? Why does truth matter? And how can we reach it?" 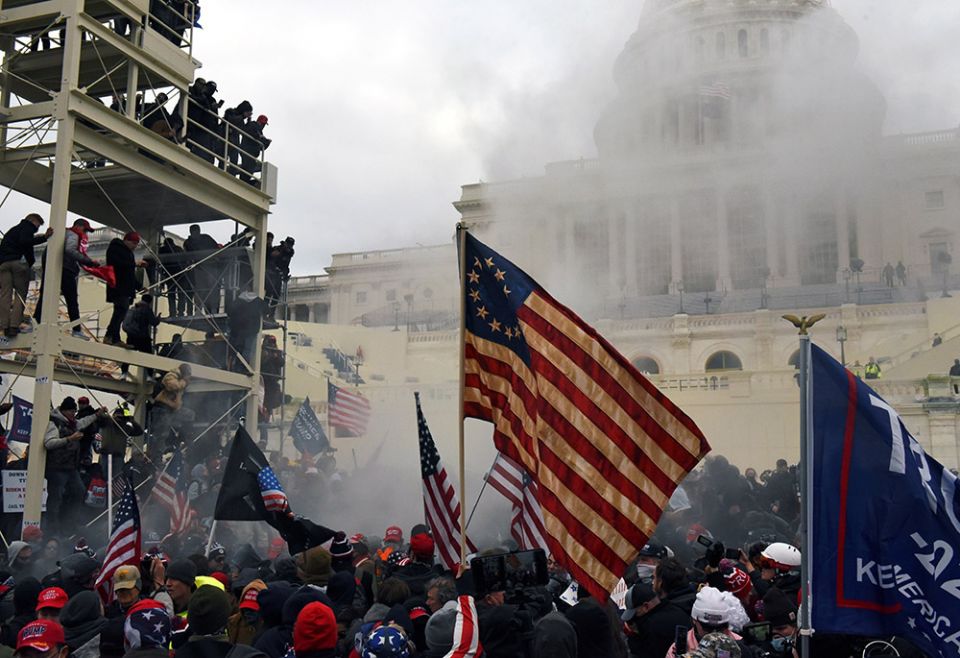 Tomassi said the theme was selected in light of the pandemic and the Jan. 6, 2021, insurrection, which revealed that "we in the United States are experiencing a crisis when it comes to the truth."

"We don't know who we can trust; we tend to prioritize group belonging over truth; we are constantly victims of confirmation bias; and we don't have an experience of the truth as something that we come to know in a relationship," he said. "It seems to me that the question of the truth has become even more pressing."

The event's speakers were chosen "not to 'tell us what's true,' but to show witnesses of what it looks like to be tenacious in pursuit of the truth," he said.

Amongst the more impactful of the presentations was the discussion on Sunday afternoon (Feb. 20) between Florida-based public defender Esmeralda Negron and Bryan Stevenson, founder of the Equal Justice Initiative and author of Just Mercy. 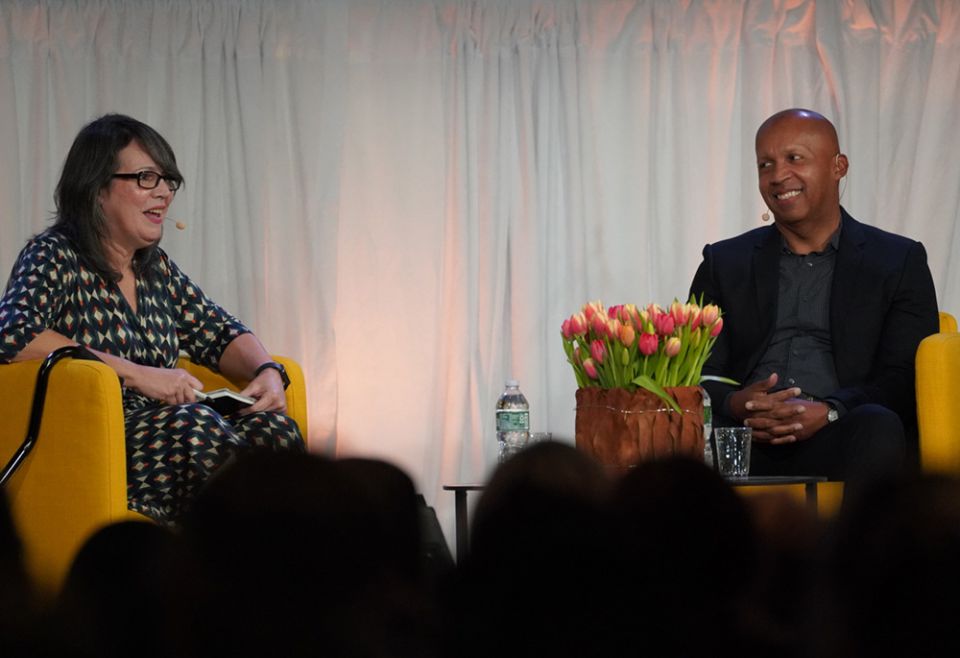 Stevenson, who has worked to achieve justice in the U.S. prison systems and fought tirelessly systemic racism, spoke about his own struggle to maintain hope in the midst of combating the painfulness of inequality and injustice face-to-face on a daily basis. He admitted to wanting to quit his work on several occasions, and how his reliance on faith and community have enabled him to stay true to what he feels to be his purpose.

"It's when we're most broken that we're really able to understand what grace feels like," he said.

Stevenson told several stories about his attempts to get prisoners off of death row — some failed, some successful. He was met with uproarious applause and tears after he pointed out one of those former prisoners he worked to release who was sitting in the front row.

He went on to challenge the audience, saying that too often a society prides itself on how it treats its most gifted and privileged children. "The real way you can understand a society's treatment of its children is by looking at how it treats its poor, neglected and abused kids, and the ones who are in detention facilities," he said. 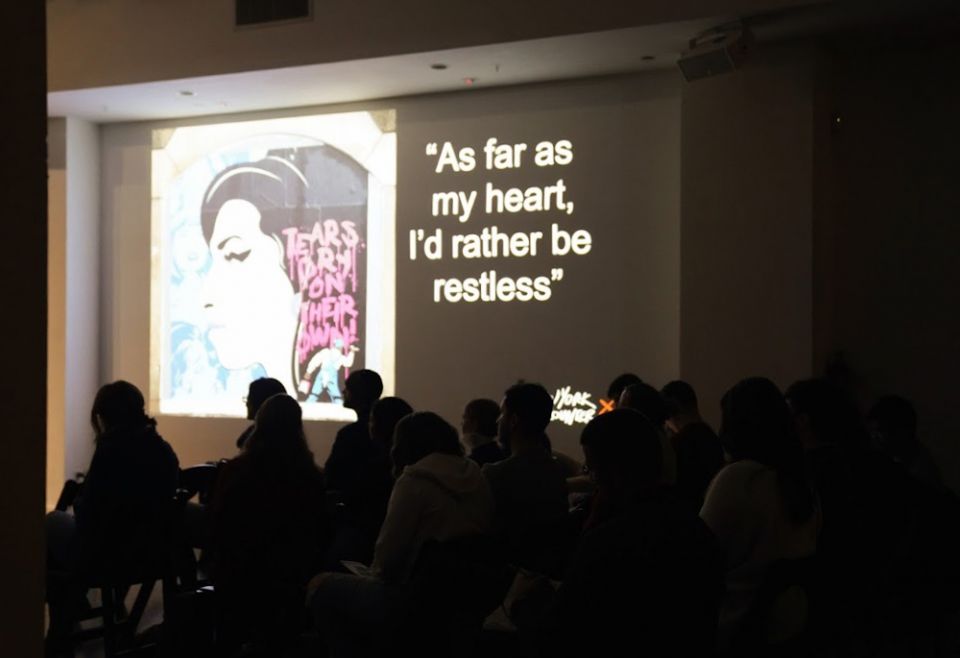 One of the exhibits on display at New York Encounter was about the life and music of the late British singer-songwriter Amy Winehouse, which the author curated and presented during the event. (Mariagustina Fabara Martinez)

Other exhibits on display at the Encounter included one about regaining trust in science, and another about the life and music of the late British singer-songwriter Amy Winehouse, which I had the privilege of curating and presenting. Having volunteered at the Encounter for eight years now (and having participated in the CL movement for nearly 10 years), I, along with a group of friends, proposed the idea of an exhibit about Winehouse after hearing about this year's theme.

Though Winehouse dealt with addiction, destructive relationship patterns and depression, to me, her music testifies to the urge for the truth, love and meaning that all humans share in common. Winehouse herself was not a particularly religious person (she identified as a secular Jew). But as the song lyrics from which the title of the exhibit borrows ("As far as my heart, I'd rather be restless," from her 2008 song "Wake Up Alone") demonstrates, she had an understanding of the spiritual restlessness of the human heart that echoes the intuitions of theologians from Augustine to Pascal.

Working on this exhibit reminded me that although the Encounter is technically a "Catholic event," in reality, it's hard to categorize it as such. A brief glance at the program quickly gives away its "religious" affiliations. And yet its scope of topics and speakers on offer surpasses the "merely" religious. From the more socially conscious to the arts and pop culture-focused panels, and with guests hailing from different Christian denominations, religions, to no religious affiliation at all; those with ties to the political left and right; and with high school students to octogenarians, the Encounter speaks to the "small c" catholicity of the church, which offers something for everyone.

The politics of baseball, from Fenway Park to the South Lawn

We used to look to religion for truth. It's no match for Donald Trump's TRUTH.