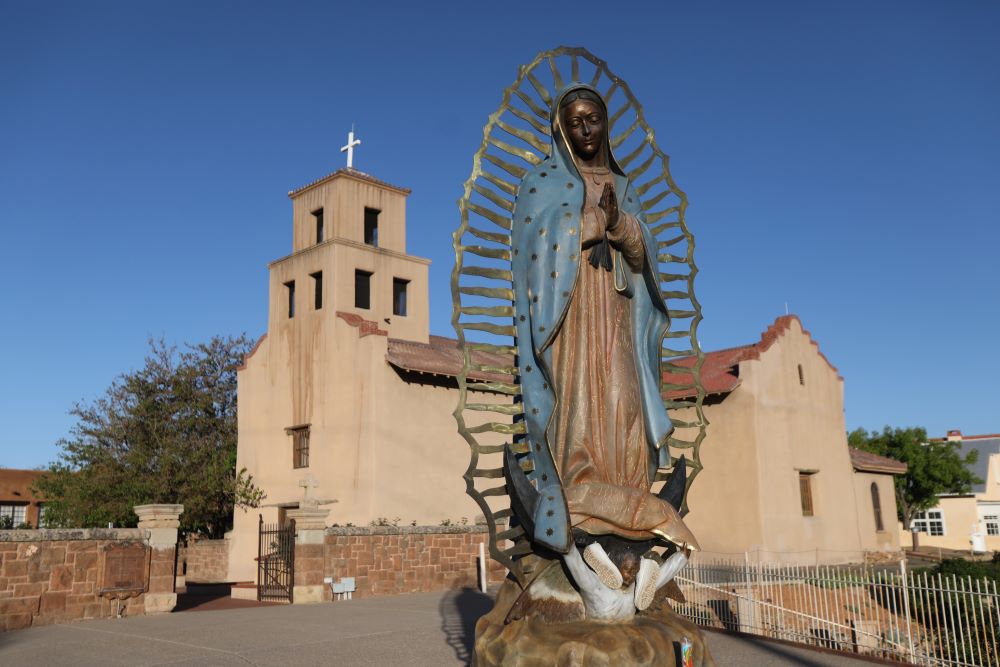 Awash in irony, Kirstin Valdez Quade's debut novel, The Five Wounds reads like a prose poem. Its descriptive details develop the characters slowly, gradually revealing the plot in which a man seeks redemption without understanding the meaning of the concept. 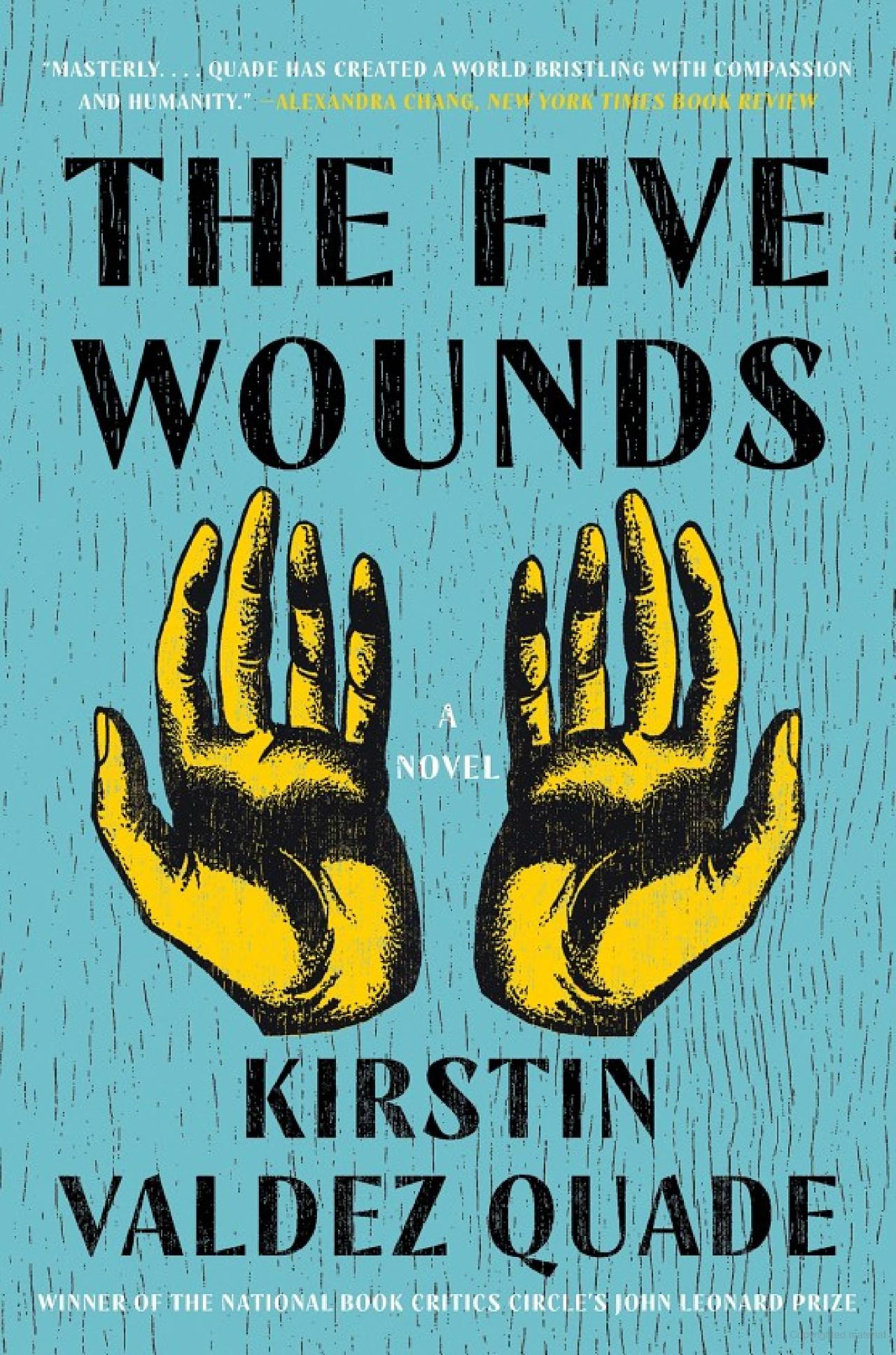 The Hispanic Catholic Church, with its evocative religious art and rituals, forms the backdrop of the story with the title alluding to the wounds of Jesus Christ. His form is on the crucifix in an abandoned gas station. Valdez Quade describes it as "ancient and bloody … violence is in the very carving … chisel marks gouge belly and thigh. … Someone's real hair hangs limply from the statue's head."

Thirty-three-year-old Amadeo Padilla, the novel's protagonist, will play the part of Jesus in the Good Friday procession. Tattoos of a flaming Sacred Heart beat against Amadeo's chest, red roses wind on his side and an image of Our Lady of Guadalupe glistens on his back. His name means lover of God and he has a propensity for alcohol and women. But things are going to be different now. At least that's Amadeo's plan.

As the story opens, Amadeo is trying to explain his religious convictions to his daughter, Angel. The two are standing in the morada under the fluorescent bulb, looking at the figure of Jesus on the cross with blood flowing from his neck to his knees. The morada is an old gas station serving as a religious meeting house for Los Hermanos, a brotherhood of Hispanic lay Catholic men. Their meeting place and practices are secret.

Amadeo's family has lived in Las Penas for nearly 400 years. His family was among the early Spanish settlers. They preserve Spanish and Mexican religious customs, with one of the most sacred the Good Friday procession honoring the five wounds of Jesus and memorializing him as he carried the cross to his death on Calvary.

As Valdez Quade puts it, Jesus' "pain is personal and cruel," and Amadeo almost feels it. He believes that Jesus is a living witness to his sins — of which there have been many.

Amadeo thinks that by carrying the cross in the procession he can redeem himself, and he considers whether he should ask for the nails to pierce his hands and feet as a kind of stigmata and an atonement for his sins. His daughter is having none of it.

A candle and roses are pictured outside the Sanctuary of Our Lady of Guadalupe in Santa Fe, N.M., May 20, 2021. (CNS/Bob Roller)

We first see Angel at eight months pregnant, dressed in tight jeans, button open at the waist. She's wearing a white tank top, black bra and a gold cross above her breasts. Valdez Quade uses words like a poet. Here, she's juxtaposing Jesus hanging on the cross with the cross on Angel's neck. Angel has zero regard for Amadeo's sense of the spiritual.

Angel has argued with her mother. She has decided to leave their home and live with her grandmother and her father. Only, Amadeo says, this is a bad time.

In reality, he's ashamed of Angel because she is pregnant and not married. She was also conceived out of wedlock — something Amadeo is not proud of. He doesn't want her to be seen by any other member of his religious group of Penitentes.

Angel and Amadeo's mother, Yolanda, are the other two main characters. Valdez Quade tells the story through the perspectives of all three, with each point of view embellishing the plot and increasing the tension and irony. She adds authenticity by using numerous Spanish words and descriptions of the New Mexico landscape where the tale is set.

The sometimes overly long plot focuses on the difficult relationship between Amadeo and Angel but takes many twists and turns along the way.

Yolanda learns she has brain cancer but refuses to tell anyone. Marissa, Angel's mother, leaves her abusive boyfriend, Mike. Brianna, Angel's teacher, has an affair with Amadeo. Lizette, Angel's girlfriend, takes drugs and abuses Angel. Connor, Angel's baby, offers rare moments of grace and seems to be the main beneficiary — after Amadeo — of divine aid.

Amadeo feels as though everyone is against him. He still lives at home with his mother, the family breadwinner, and is devastated to learn that she is terminally ill. He's not able to hold a job. He tries to start a business fixing windshields and makes a mess of an executive's car hood. He's lost his license for driving under the influence and can't control his drinking.

Then late at night, Angel calls him to bring her home after an argument with Lizette. He's drunk but desperate to help his daughter. He takes the car and the baby to find her. Unfortunately, he forgets to lock the baby chair into the car's back seat.

As he's driving along a country road, a coyote crosses directly in front of him. The scene is riveting and made more so since coyotes are considered spirit animals, especially in areas of the Southwest where they stand for new beginnings. It's arguable that Valdez Quade is relying on coyote symbolism, but this encounter, marking a fresh moment of insight for Amadeo, changes everything.

This novel is based on a short story of the same title that first appeared in The New Yorker in 2009, and was later included in Valdez Quade's award-winning collection of short stories, Night at the Fiestas.

In the original short story, Amadeo carries the cross for a Good Friday procession and has an epiphany in which he realizes that the point of Jesus' death on the cross is not suffering to pay for the sins of humankind. The point is Jesus' love for people.

"The [Good Friday] procession isn't about punishment or shame. It is about needing to take on the pain of loved ones. To take on that pain, first you have to see it. And see how you inflict it."

Ultimately, as this richly envisioned novel shows, Amadeo has a difficult task but one that can succeed with a little help from above.

A version of this story appeared in the July 8-21, 2022 print issue under the headline: Novel explores Hispanic Catholic family's search for redemption.