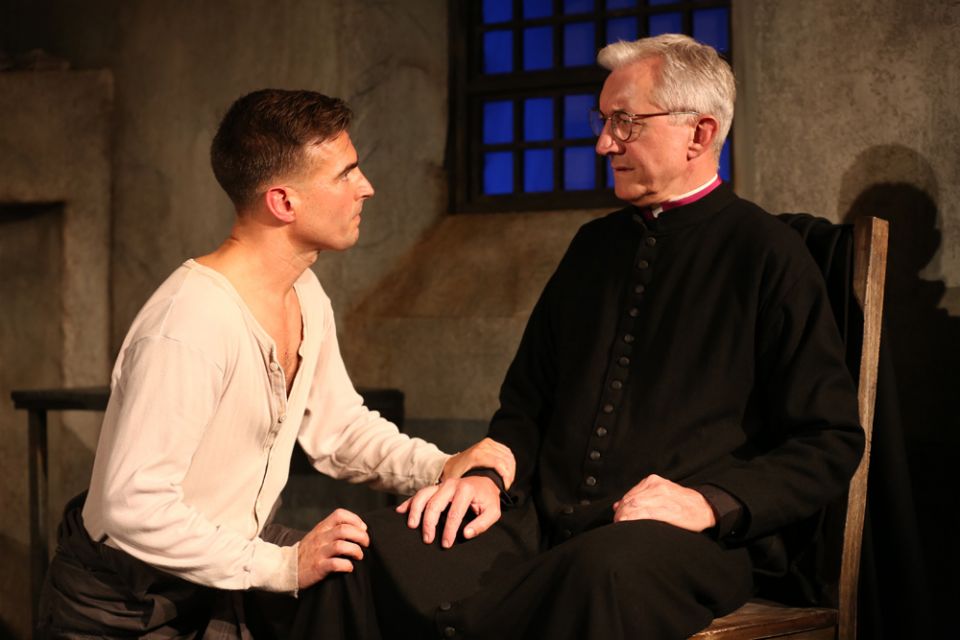 "Kingfishers Catch Fire" is a story about such extreme evil and amazing redemption that if it weren't based on facts, it might be hard to believe. Robin Glendinning's play, which had its world premiere this fall at off-Broadway's Irish Repertory Theatre, portrays the soul-saving relationship that developed between two World War II adversaries in the years following the fighting.

Readers of J.P. Gallagher's 1967 book Scarlet Pimpernel of the Vatican will know these two historical figures. Msgr. Hugh O'Flaherty was an Irish priest who saved more than 6,500 Jews and escaped Allied POWs in Rome by sheltering them and arranging for their escape, using his role as notary of the Holy Office and the cover of Vatican neutrality. Lt. Col. Herbert Kappler was the infamous head of the Gestapo in Nazi-occupied Rome. The book was the basis of a 1983 TV movie, "The Scarlet and the Black," starring Gregory Peck as O'Flaherty, Christopher Plummer as Kappler and Sir John Gielgud as Pope Pius XII.

The play's director, Kent Paul, was unfamiliar with the book and movie but knew he wanted to direct the play after the Irish Repertory Theatre's producing director, Ciaran O'Reilly, gave him the script for consideration.

"I was immediately attracted by the language of the play," he said during a telephone interview from his home on Manhattan's Upper East Side. "I was intrigued by this preposterous friendship. I knew nothing about these two people before I read the play. It's been a voyage of discovery."

While the book and movie portray the harrowing action of the war years, the play picks up in 1948 when O'Flaherty, saying he has been ordered by Jesus Christ, reluctantly makes monthly visits to Kappler, who is serving a life sentence for crimes against humanity in a prison on the western coast of Italy. 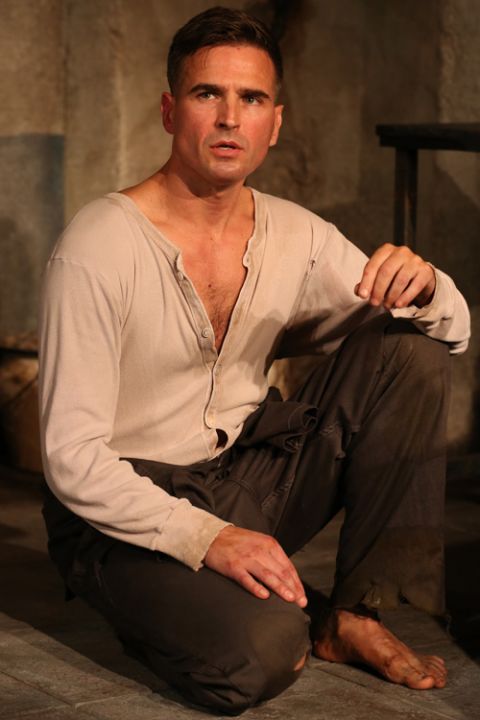 In a running time under two hours, O'Flaherty, played by Sean Gormley, and Kappler, portrayed by Haskell King in a particularly strong performance, discuss questions of personal responsibility for actions taken during war, morality and the existence of God. The play ends with Kappler begging O'Flaherty to bless him and the priest rising hesitantly to do so. In actuality, O'Flaherty baptized Kappler as a Roman Catholic in 1959.

"The conversations are entirely imagined," Paul said, adding that it's a tribute to Glendinning "that the quality of the language makes you feel this is what these two men would have said to each other."

Glendinning, the 81-year-old Irish playwright who lives in the town of Comber in County Down, Northern Ireland, was unavailable for comment. The play's title comes from a Gerard Manley Hopkins poem of the same name. It was developed following a 2016 staged reading that was part of the Irish Repertory Theatre Reading Series.

I haven't read Gallagher's book but I have owned a copy of the movie drawn from it for more than two decades. It's an exciting, action-packed drama with three of Hollywood's greatest actors. In contrast, the play is about ideas and existential questions rather than action. When I asked Paul about the challenges of directing, he said he had to "make action" and worked "quite meticulously" on ensuring every word is heard.

Action isn't needed to make this play compelling, especially in the show's most chilling scene. Kappler recalls his overseeing of what is now known as the Ardeatine Caves Massacre in which German forces executed 335 people in the caves near Rome in retaliation for the deaths of 33 German soldiers at the hands of the Italian resistance. King powerfully recounts the slaughter slowly and in great detail, conveying Kappler as a man deeply haunted by the horror of what he had done. 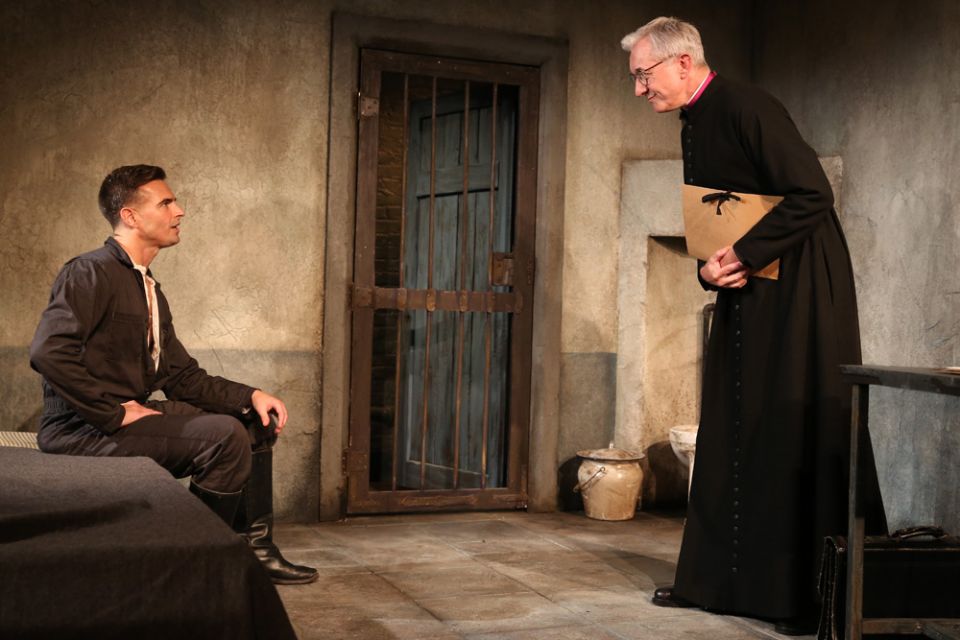 To make all the details real, Paul and the actors did much research into who the people were, "read a great deal about the war" and even tried to visualize what O'Flaherty would have seen as he drove from Rome to the prison. For that, they found a photo of a Fiat from the time to imagine a line the priest says about the long journey, "I'm a big man in a small car."

Set designer Edward Morris created a bleak cell, with dingy stone walls containing nothing but a single bed, a table, straight chair and a toilet. I found Matthew McCarthy's lighting distractingly bright, though, for a desolate prison. The atmosphere would have been enhanced by dim lights.

Still, the tight space of a prison cell is perfect for putting the focus on the sharp interchanges. A line of Kappler's stood out for me as he tries to squirm out of his culpability: "For a crime to be committed there has to be both action and intention," he says, explaining that he took action because he was ordered to but he had no intention. It's an interesting parallel to O'Flaherty's claim that he was disgusted by the idea of visiting Kappler but did so because he had been ordered by Christ.

I was also struck by a line of O'Flaherty's. Although a man of God, he is aware that questions of morality don't always have easy answers. "Colonel," he says, "I know that good and bad exist but in this world they are often so mixed up we can't tell the difference. It's a world of grays. I think it's the devil's work to persuade us that it's easy to decide in matters like these."

Paul passed on the opportunity to comment, saying O'Flaherty's words speak for themselves. "It's so beautifully put. I agree. I couldn't possibly say anything better."

Then he added, "In a certain sense the play is about to know all is to forgive all. I think of Monsignor encouraging Kappler to continue his search for God. He makes it clear he doesn't forgive Kappler for what he did but he can't live in the past. He has to move on."

He said it was rewarding "to see a play of language and ideas come to such vivid life."

The show was sold-out many nights and has its run extended for a week, and will now close Oct. 27. Paul said the producers are exploring possibilities for future productions. This should be possible based on the simplicity of the needs — only two actors and one minimalist set.

I hope the play's timeliness, with the rise of anti-Semitism in Europe and America, will help it to be brought to life again soon. This story of devastating hate followed by extraordinary grace needs to be told often.

"The play speaks for itself so eloquently," Paul said. "I dread and hate the anti-Semitism that has been developing in Europe. The play is about, if we want to live, we have to embrace each other. I think the play reveals to us the necessity of telling our stories because only in telling our stories do we accept ourselves.

"It's one of the finest things I've done."

[Retta Blaney is an eight-time journalism award winner and the author of Working on the Inside: The Spiritual Life Through the Eyes of Actors.]