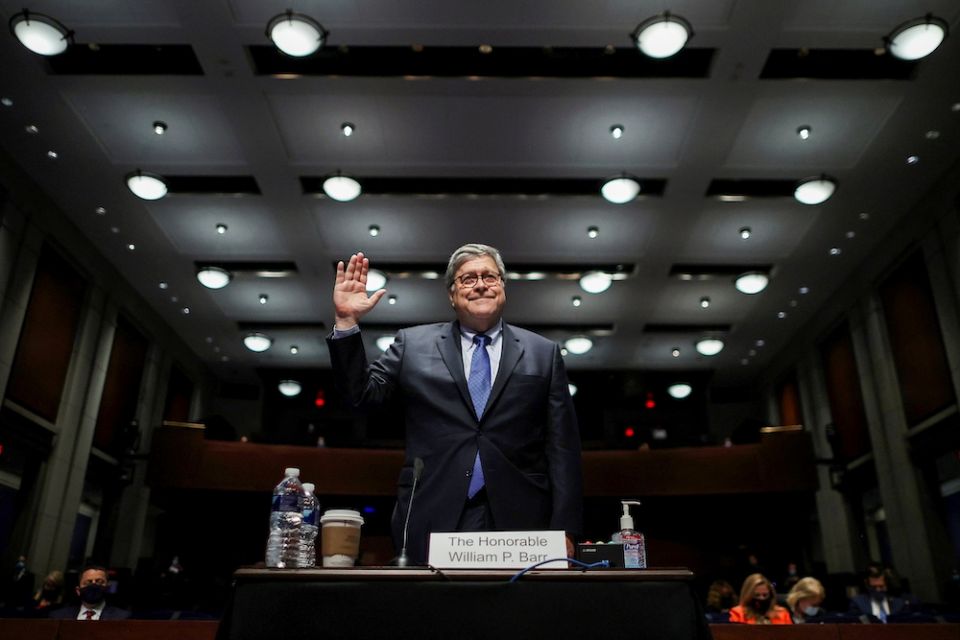 Attorney General William Barr is sworn in to testify before the House Judiciary Committee on Capitol Hill in Washington July 28. (CNS/Reuters/Chip Somodevilla)

The decision to honor Attorney General William Barr at the National Catholic Prayer Breakfast later this month has been called "shocking, incomprehensible and scandalous" by the Association of U.S. Catholic Priests.

Congregation of St. Joseph Sr. Helen Prejean, who has dedicated her life to accompanying people on death row, also called it "scandalous" in her tweet Sept. 8 urging the group to "immediately rescind their invitation."

Barr is to be given the Christifideles Laici (Faithful Christian Laity) award by the National Catholic Prayer Breakfast (NCPB) at their virtual prayer breakfast on Sept. 23. The NCPB website says the award is given to laity whose work "exemplifies" the teaching of the Catholic Church and to "help highlight those good works and those who serve the Church so well." The trophy inscription reads: "In Honor and Gratitude for Fidelity to the Church, Exemplary, Selfless and Steadfast Service in the Lord's Vineyard."

Really? How exactly does Barr as U.S. attorney general exemplify the teachings of the church?

Of course, we do not know his private life, nor the state of his soul. But this award is given to him for his public actions. What is on the public record?

First and foremost, Barr is not pro-life. In fact, he is pro-death. Under his watch, the federal government has begun to execute prisoners for the first time since 2003. In a little over one month this summer, five prisoners were executed by the Federal Bureau of Prisons, which is under Barr's control. More executions are scheduled.

What else has Barr done that might show "exemplary, selfless and steadfast service in the Lord's vineyard?" Not much. In fact, his actions appear to contradict Catholic social teaching.

Catholic social teaching says that citizens have the right to participate in the decisions of government. But Barr has denied his fellow citizens the right to assemble and petition the government for "redress of grievances" when he ordered the clearing of peaceful protestors from Lafayette Square (across from the White House) on June 1, so President Trump could walk across the Square, accompanied by Barr, to hold a Bible aloft at the side door of St. John's Episcopal Church for a campaign photo-op.

Catholic social teaching says that we should respect the integrity and sacredness of the family unit. But Barr has used his office to defend the separation of parents from their children at our southern border when they have approached to apply for asylum.

Catholic social teaching says that everyone should be treated fairly and justly by the law, but Barr has given special privilege to the political allies of President Donald Trump. In May, he ordered the Department of Justice to seek a reversal of the conviction of former Gen. Michael Flynn, Trump's short-lived national security advisor who had twice pled guilty to lying to the FBI. Barr also gave special treatment to Trump's dirty trickster Roger Stone when he ordered the DOJ to seek a lighter sentence for Stone. Trump ultimately rendered the question moot when he gave Stone a presidential pardon. No jail for the friends of Trump. 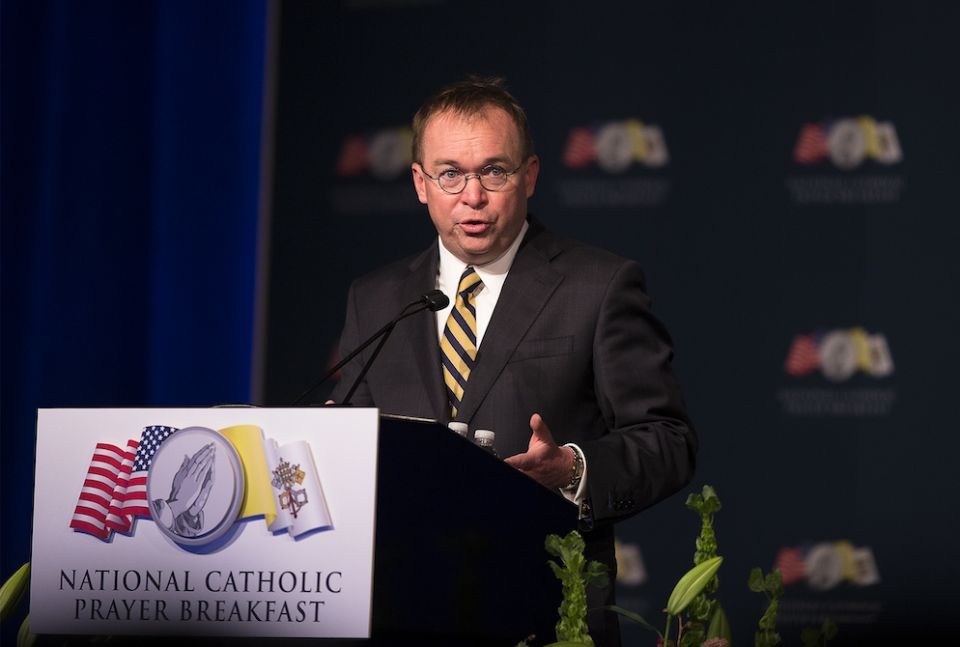 As legal commentator Jeffrey Tobin observed in an article in the New Yorker, "These actions are not the even-handed application of criminal law, but rather the indulgence, by the Department of Justice, of the President's grievances with his enemies."

The Ten Commandments and our catechism say that we are supposed to tell the truth. But Barr has said without evidence that mail-in ballots are an invitation to fraud. He distorted the evidence in Robert Mueller's investigation of the 2016 presidential campaign when he released a severely redacted and edited version of the Mueller report, which amounted to a whitewash of Mueller's investigation.

Barr has violated legal and human rights when he ordered federal officers, with no ID badges, to go to cities like Portland, Oregon, and snatch people from the streets and detain them without charge.

Barr's public actions do not "exemplify" the teaching of the Catholic Church or a commitment to true justice. But this award does make clear one thing: The National Catholic Prayer Breakfast is not a religious organization. It is a political one. It should be called the National Catholic Republican Breakfast. It is a bunch of rich, powerful, right-wing Catholics who get together once a year to reaffirm each other's prejudices and to promote their own political agenda — which often is contrary to the teaching of the church.

The NCPB is one of the Washington "swamp" creatures that Trump promised to eradicate.

It was founded in 2004, by right-wing Republican Catholics who had "breakfast envy" after years of attending the National Prayer Breakfast run by evangelicals like Jerry Falwell Jr., who recently resigned in disgrace from Liberty University in a sex scandal.

The NCPB founder Leonard Leo, an attorney who worked for many years as executive vice-president of the Federalist Society, a right-wing lawyers' group in Washington. "Few people outside of government have more influence over judicial appointments now than Leo," according to The Washington Post.

Leo is a conservative Catholic, but his agenda is political. He has raised millions of dollars in "dark money" for right-wing causes, including judges like recent U.S. Supreme Court nominees Neil Gorsuch and Bret Kavanaugh.

Leo is a Trump acolyte. In May 2017, he told the Acton Institute that regarding judicial appointments, "We are all in the debt of Donald Trump." 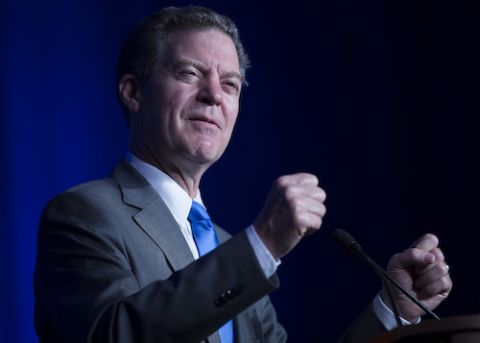 Many conservative Republicans have been invited to address the breakfast, whether Catholic or not. Past speakers have included Vice President Mike Pence (who is technically an apostate, having left the church); Mick Mulvaney, Trump's former chief of staff; former President George W. Bush; former Kansas Gov. Sam Brownback; and former House Speakers Paul Ryan and Newt Gingrich. It is rumored that President Trump will be a "surprise guest" of the NCPB virtual meeting this year.

The NCPB also generally invites the most right-wing bishops. This year, Los Angeles Auxiliary Bishop Robert Barron, known for his media ministry, will address the breakfast.** Barron recently held a secret meeting to discuss concerns about "radical traditionalists" in the church.

In the past, invited bishops have included Cardinals Robert* Sarah and Raymond Burke, who are two pillars of the "anti-Francis" Roman curia faction. The breakfast almost exclusively invites "culture warrior" bishops like Archbishop Charles Chaput (formerly of Denver and Philadelphia), Thomas Olmsted of Phoenix and Michael Sheridan of Colorado Springs. The scent of scandal has not deterred the NCPB from inviting bishops Robert Finn of Kansas City and Richard Malone of Buffalo to address them in the past. Both bishops have since resigned in disgrace.

Why does the NCPB matter at all? Two reasons. They have money. They have power.

Bishops always need money and are always drawn to the powerful. The Catholic Church is a money-eating machine. It has roofs to fix, boilers and air conditioners to replace and parking lots to pave.

Bishops need money, and wealthy people have it. People like billionaire investor Timothy Busch, founder of the Napa Institute. (Napa Institute Executive Director John Meyer is on the board of the Prayer Breakfast). The Napa Institute sponsors an annual gathering of extremely conservative Catholics at Busch's fancy $500- to $1,000-per-night resort in the Napa Valley, where he gives guests goody bags that include his Trinitas wine and fancy cigars.

Sponsors and supporters of the breakfast include rich people from rich organizations like the Knights of Malta, the Knights of Columbus, Legatus (for Catholic business leaders), and the increasingly political EWTN media company.

Pope Francis has said that he wants a poorer church that is "for the poor." Jesus came to the poor, the suffering, the oppressed and those rejected by the rich and powerful. Jesus warned against the human desire for money. In Matthew 6:24 and Luke 16:13, Jesus says, "No one can serve two masters. He will either hate one and love the other or be devoted to one and despise the other. You cannot serve both God and mammon."

That Jesus, always making trouble for us! So long as the church seeks to take its place among the rich and powerful, we are serving the wrong master. We should have learned that lesson from the Borgias and the Medici.

The National Catholic Prayer Breakfast is not a Catholic or Christian organization, it is a political one. It honors and caters to the rich and powerful, like Barr and Republican politicians. It anoints the rich and powerful with its own unction. It cloaks them in religious garments and plies them with pious sounding awards. The NCPB has made its decision about which master it will serve.

*Cardinal Sarah's first name has been corrected.
** This sentence has been updated to accurately reflect Bishop Barron's role at the breakfast.

Read this next: William Barr, nation's top lawyer, is a culture warrior Catholic

Editorial: Founding documents aren't 'perfect,' but they're our best hope

You may be more elite than you think