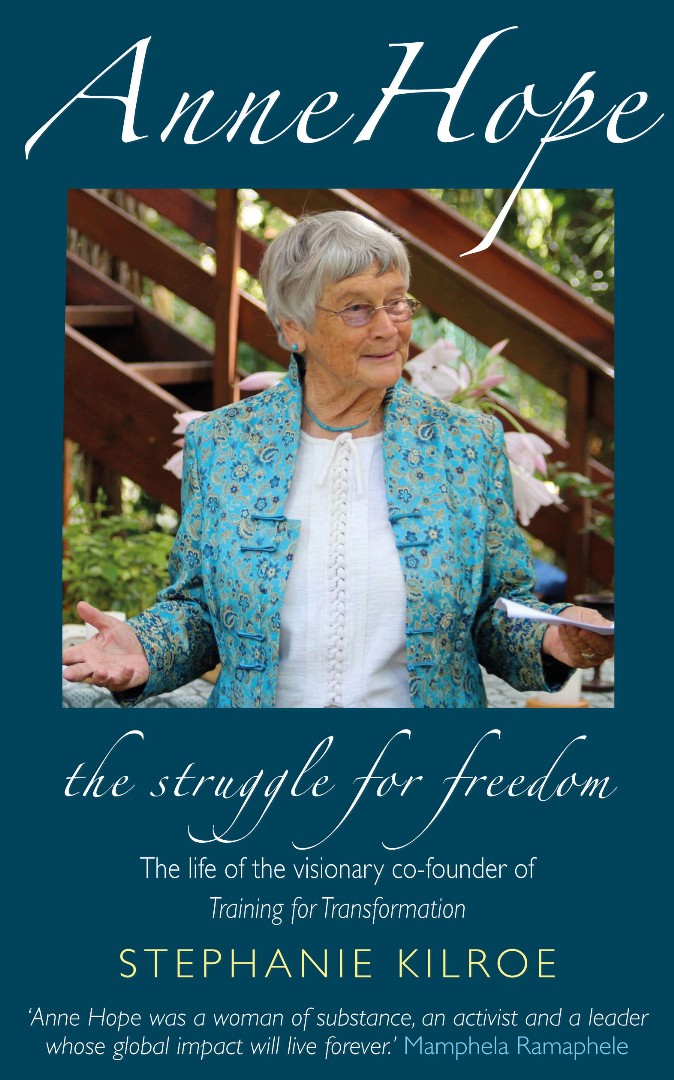 As someone who knew and loved Anne Hope, I was not sure a biographer could do justice to her, capture her grace and commitment to equality as well as her emotional and spiritual complexity. Anne was a white South African woman, a leader of the international Grail movement, the co-founder of the influential Training for Transformation program, and a contemplative. Stephanie Kilroe captures it all in this biography.

The book is creatively based on Anne's own unpublished autobiography, reinforced by interviews and conversations with family, friends and colleagues. Anne's partner and co-founder Sally Timmel (of the United States) generously provided invaluable insights and personal information. The result is a many-dimensional Anne Hope that will surprise even those who knew her well. Readers meet a unique, gifted, successful, albeit sometimes conflicted, figure in contemporary global Catholicism. She is well worth the read.

Anne was of Scottish, Welsh and Irish ancestry, brought up in colonial South Africa. For generations, her family contributed to society through education, the military, medicine and law, a tradition that would continue through Anne's generation and beyond. While she came from privilege, the accidental death of her father during his distinguished military service as part of British and South African support for Italian partisans fighting Mussolini's forces during World War II meant that Anne's family was not so much wealthy as well placed. She chafed under the expectations of her widow mother's sense of "people like us," and eventually found her own ways to contribute to a new South Africa and a more just world.

Anne's story has its own logic — conventional studies and teaching; a Protestant fiancé who would not marry a Catholic; international Catholic youth and young adult involvement that led her to meet the Grail and eventually become a member and leader of that international women's group dedicated to social justice and spiritual search; groundbreaking work in adult education and community organizing that got her exiled from her own country; family tragedies; and after retirement, a focus on nature, contemplation, and poetry that had so grounded her life from the beginning.

Woven throughout her story is pre and post-Vatican II Catholicism that shaped Anne's worldview. Faith fueled her tireless work for racial and economic justice in Africa (1968), as well as stints in the U.S. where she trained at Grailville and collaborated at the Washington, D.C., Jesuit-funded Center of Concern. She was critical of the church's failings but still able to work within its parameters.

Anne studied the writings of influential Brazilian educator Paulo Freire whose Pedagogy of the Oppressed (1968) was a Bible for social change agents. She and Sally adopted his model of critical consciousness with highly participatory organizing methods that resulted in their popular education program and training manuals entitled Training for Transformation.

Anne worked at the Christian Institute of Southern Africa, a faith-based anti-apartheid organization. Steve Biko, black consciousness movement leader, asked Anne to help develop training programs within that movement. However, the nine-month plan was truncated when many of the leaders were arrested. Anne was threatened with arrest or banning. So with many others, she chose exile rather than cease her efforts to help black South Africans carve out their own freedom.

She and Sally went to Kenya and later Zimbabwe where their Training for Transformation programs flourished. The manuals were translated into several languages and implemented in many countries as tools for empowering oppressed communities. Anne was only allowed to return to South Africa in 1990 following its liberation. It is no wonder that Biko, who was assassinated for his work, counted her among the two most influential women in his life.

Anne made that kind of impact on people. Her grace and grit, her commitment to empowering each and every person, especially those who needed the critical tools to participate in society, made her an inviting and embracing presence. She was wonderfully attractive — full of life and fun, a woman of simple good taste, extremely well read, thoughtful and unafraid to express an opinion.

Anne is portrayed as deeply human like the rest of us, full of self-doubt, one who suffered periodic depression, and lived the ups and downs of a long love relationship made more complicated by the fact that her partner was a woman. She wrestled with her own high expectations, her desire to please and be lauded, her wish for community when others were not ready to commit. She had a boundless love for family, several of whom died violently and prematurely. She eventually became the grandmother she had always hoped to be to the children of a niece who was killed because of her social justice work. The bittersweet family tradition of service goes on.

This portrait of an international Catholic woman leader is a welcome addition to the literature of contemporary Catholic women who represent the best of a flawed tradition, combining sacrament and solidarity. Anne was religiously differentiated, someone who could go to Mass at a parish, participate in a women-church group, revel in the Grail's tradition of Catholic liturgical innovation, and embrace the richness of other religious traditions. Her daily practice included praying the Psalms, doing yoga and engaging in serious reading. She loved to garden and she treasured her animal companions, all of which led her to embrace a cosmic spirituality ahead of many, and to combine feminism with ecology. She had the soul of a mystic and the body of an activist, all of it quite inextricable. She and Sally nurtured the Grail in South Africa, organizing a center in Kleinmond where community development education continues following their retirement move to California.

Now someone needs to write Sally's biography in order to fill out the picture of two very talented and powerful women who co-created and sustained programs and projects for justice that made and continue to make a real difference. Someone else needs to reflect on the meaning and impact of their work together as part of the larger international, ecumenical, spiritually- grounded, often women-led movements of which the Grail is but one example. When these stories are told, including, as this book does, the many facets of each one's life, we will have a far richer, fuller picture of how social change agents live. The one-dimensional, male-focused, hagiographic renderings of history to which readers have become accustomed pale before this robust account of Anne Hope.

A version of this story appeared in the Feb 7-20, 2020 print issue under the headline: Rich portrait of a social change agent in biography of Grail leader Anne Hope.