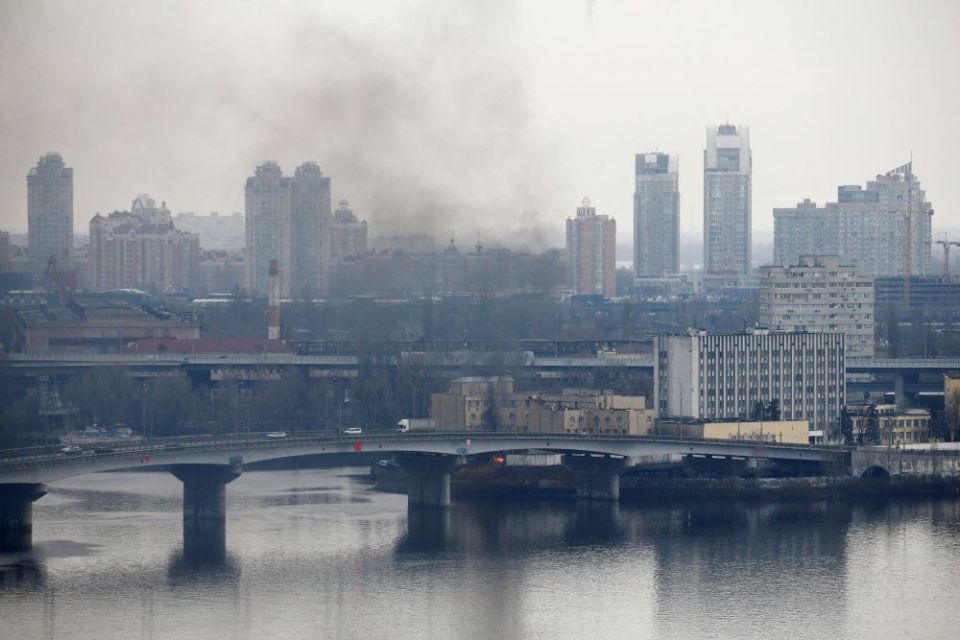 The situation in Ukraine is still unfolding, but it was clear early on that the invasion was not a limited "special military operation" as Russian President Vladimir Putin called it, but a full-fledged invasion. As I write on Thursday, Russian troops are trying to overcome the vastly outgunned Ukrainian military, after which the road to Kyiv will be open.

The outrageousness of the lies coming from the Kremlin betrayed their evil intent. Putin called for the "denazification" of Ukraine. Resurrecting the charge of complicity with the Nazis by some Ukrainians during World War II is not likely to fool anyone. In the first place, a generation of Russians and Ukrainians learned about the mass famine Stalin perpetrated on Ukraine, making it fertile ground for anyone who would liberate them from his tyranny. Does this historical slur still resonate? The specific moral obscenity of the slur now is revealed in the fact that the current president of Ukraine, Volodymyr Zelensky, is Jewish.

The sufferings of the people of Ukraine and of their compatriots living abroad is acute. My colleague, Vatican correspondent Christopher White, reported yesterday on the views of Ukrainians in Rome. I have been emailing friends from Ukraine in the past few weeks, assuring them of my prayers for peace, prayers that now shift first to a concern for their safety.

The war creates a conundrum for President Joe Biden and NATO. Ukraine does not belong to NATO and the president pledged not to intervene militarily. Sanctions take time, and the Russian troops are on the march. Much is being written about the West's options today in whatever news source you choose to consult. We should all say a prayer for the president and those world leaders who have tried for so long to prevent this war and must now try and find ways to limit it.

Christians face a different conundrum. Last autumn, Pope Francis joined the St. Egidio community in their two-day Peace Meeting in Rome. The Holy Father's talk reflected the ambivalence of the Catholic moral tradition when it comes to war.

The pope prayed that God would "demilitarize the human heart," a beautiful turn of phrase that speaks to the Christian tradition of nonviolence.

He also said, "We must not be indifferent onlookers. On the contrary, we need to empathize with those who share our humanity, its aspirations, its struggles and its frailties."

There is the conundrum: What does empathy for the people of Ukraine entail at this moment, when the heart of Putin shows itself to be immune to the pope's prayers for peace? Is it realistic to hope that a man who traffics in morally obscene lies to justify his own acts of aggression is likely to be moved by moral concerns at all?

It is from this conundrum that the venerable just war teaching was born. It is rich, complex and comprehensive, but in a nutshell, it extrapolates from the moral conviction that a person has the right to defend himself to the moral parameters by which a people may defend themselves. The teaching has been much abused, used to justify even preventive wars like the war in Iraq, but its moral seriousness is as good a guide as we are likely to find in these moments when the evil of the world forces us into difficult, complicated and ambivalent moral calculations.

The Christian witness to nonviolence can be abused. It must not be used to cloak indifference to the plight of the Ukrainian people. The U.S. and NATO have it within their power to stop the Russian aggression, even though they are not bound by any treaty to come to Ukraine's aid. The decision not to deploy that power may be the correct decision. Intervention might only make matters worse. But let's not be too proud of ourselves for abstaining from this fight when it is only the people of Ukraine who will pay the price. They can be forgiven for finding our concern for moral integrity to be of no consolation.

The statement issued by University of Notre Dame President Fr. John Jenkins captures this spiritual and moral conundrum. "Now, more than ever, our friends in Ukraine are in need of healing and hope," Jenkins said.

Some people may dismiss this sentiment as like the offers of "thoughts and prayers" after a tragedy, but Jenkins' statement isn't weak. It is ambivalent, reflecting the challenge the Christian tradition faces when it comes to war. It is unseemly for clerics to advocate war, but the people of Ukraine can be forgiven for dismissing the promise of prayers when they have told us what they need are surface-to-air missiles.

I confess I do not know what I would do if I were in the president's shoes. We can hope that the sanctions will so harm Putin and the people around him that his regime might pull back, or even be hurled from power. Morally hollow regimes can last a long time, however, before the last leg is kicked from underneath them. They do eventually collapse, but there can be so much suffering before that collapse comes.

In the midst of such enormous evil, one thing is clear: We humans will always need a savior. We may seek progress, and we may yearn for peace and try to build it as best we can. But there is evil in this world and only God's grace can conquer it. May he have mercy on us all.