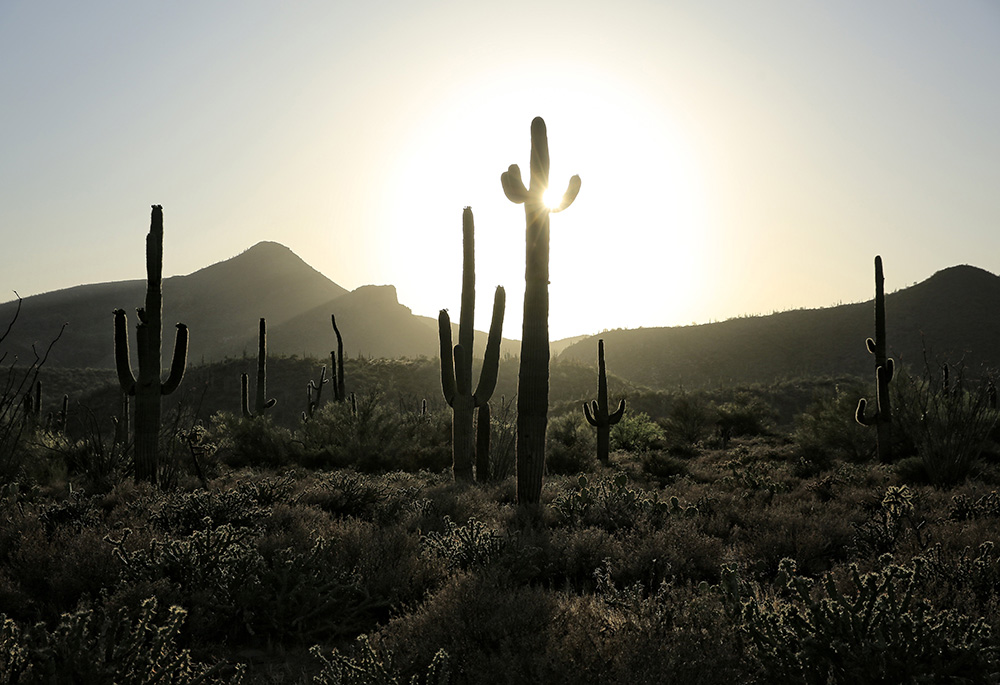 The sun sets behind a desert view in the Spur Cross Ranch Conservation Area in Cave Creek, Arizona. Jesus' desert sojourn began immediately after his baptism where he heard God proclaim, "You are my beloved Son; with you I am well pleased." (CNS/Nancy Wiechec)

Jesus was really tempted? If you think it's a widely accepted idea, Google reactions to The Last Temptation of Christ. When Nikos Kazantzakis' book came out in 1955, the Catholic Church added it to the "Index of Forbidden Books," the list that named literature that could put a person's eternal salvation at risk. (For a time, it included works by Descartes, Copernicus and even Les Misérables.)

As a movie, "The Last Temptation of Christ" incited its own corps of outraged critics, none of whom seemed to comprehend that Kazantzakis suggested that Jesus knew temptation but did not succumb to it.

Remembering that the evangelists played down Jesus' baptism lest we see him as a disciple of John, it's pretty amazing that Matthew, Mark and Luke all tell the story of the temptation. When we think about the reality of Jesus' temptations, scholars tend to suggest that this is a story the evangelists would not have invented. It must have come from something Jesus shared with his disciples about his own experience.

A key to Luke's telling is that the devil introduces the first and third temptations with the challenge, "If you are the Son of God."

That reminds us that Jesus' desert sojourn began immediately after his baptism where he heard God proclaim, "You are my beloved Son; with you I am well pleased." Between the baptism and this scene, Luke recorded Jesus' genealogy, a list that begins by saying that Jesus was thought to be the son of Joseph and takes the lineage all the way back to Adam — whom Luke also calls a son of God. Luke seems to imply that Jesus' struggle to understand and live the vocation of being son of God was both unique to him and applicable to all the descendants of Adam.

Luke adds one distinctive detail to his version of the temptations. While Mark and Matthew end this scene with angels ministering to Jesus, Luke says that the devil "departed from him for a time." (Note: Luke depicts angels at Jesus' birth and not again until his agony in the garden, but in Luke 22:28 Jesus tells his disciples, "You have stood by me in my time of temptations.")

Luke presents the temptations as Jesus' struggle to live as a faithful son of God. The challenge to turn stones to bread focuses on self-preservation. It was not simply a question of hunger, but the purpose of his life: Would he live self-assured and comfortable or risk security for service and rely on a community of faith? Because Jesus understood how prioritizing his own needs and desires could undermine his mission, he would later send his disciples out on mission without provisions, ready to rely on the power of the Gospel alone.

The bargain the devil offered Jesus with all the kingdoms of the world implied accepting the methodology of the powerful: fear and coercion and a rule book that says it doesn't matter if might makes right because might can trump everything else.

Finally, if Jesus wasn't going to live for himself alone and wasn't going to seek power over all else, perhaps he should just say, "Whatever happens must be God's will. If I am not supposed to die today, the angels will save me even if I jump off the temple tower."

We believe that the man named Jesus of Nazareth was a human being in every sense of the word. Luke tells us that his time in the desert previewed the confusing situations about which he would have to discern and the hard choices he would have to make as he lived out his vocation as a unique son of God. We could read many of Jesus' interactions with his disciples as parts of the conversations in which he shared his own temptations to encourage them in their struggles to live as pleasing daughters and sons of God.

Anyone who lives with passion, anyone who becomes deeply committed to the cause of Jesus will be tempted in the same ways he was. The trickiest thing about the temptations is that they arrive in the camouflage of good ideas, even as ways to advance the reign of God. (The devil is an expert at disguise: slicker than fake news and much subtler than our ads that claim absurdities like the idea that love is contained in a particular make of car.)

We can be grateful to Luke for telling us that temptation was not a one-time event for Jesus any more than it is for us. With that in mind, today's Gospel invites us into our 40 days of Lent as a time to contemplate and learn from Jesus' decisions about how to be a faithful Son of God. He did it to show us how to do the same.

A version of this story appeared in the Feb 18-March 3, 2022 print issue under the headline: We are tempted like Jesus was.