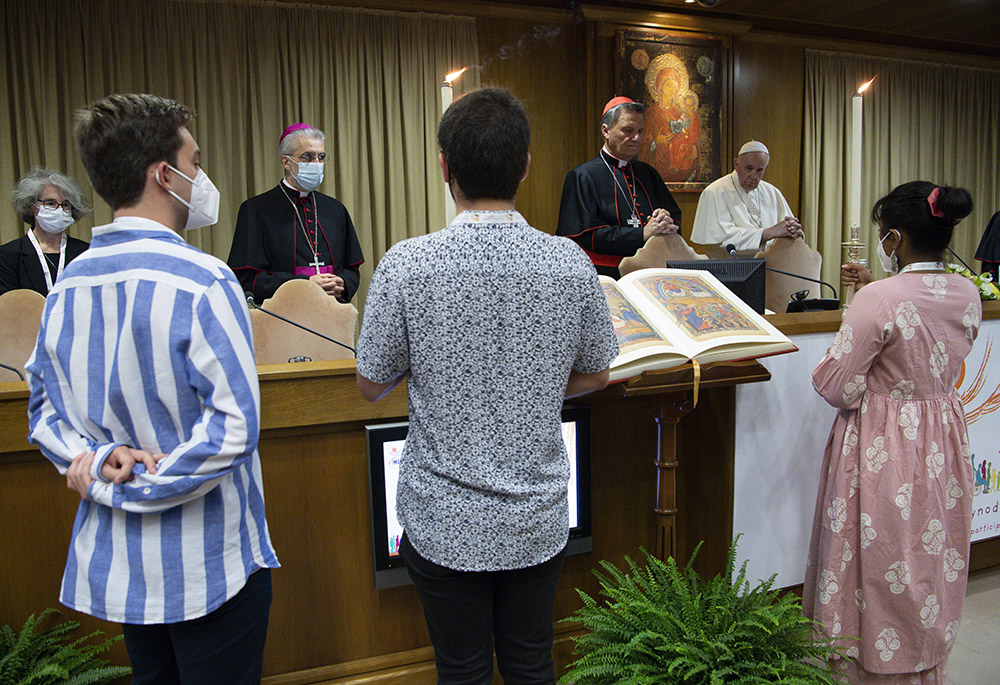 Pope Francis leads a meeting with cardinals, bishops, priests, religious and laypeople from around the world in the Synod Hall Oct. 9, 2021, at the Vatican. "When the spirit of synodality is practiced, it would make the church an inverted pyramid," a prominent Indian theologian told a recent forum on synodality. (CNS/Paul Haring)

"This will spell the end of Christianity!"

How many times has history recorded a similar warning? The first written report of this threat comes in today's reading from Acts. This crisis could have relegated the Jesus movement to obscurity or even ended it.

Reading Acts 15, it's easy to overlook the comment: "There arose no little dissension and debate." The community faced a serious conflict pitting Paul against faithful Christian Jews who knew in their bones that God's covenant demanded strict faithfulness to the Mosaic law and practices.

Contemporary comparisons to the thinking that divided the Judeans and Paul's crowd might include bishops who openly criticize Pope Francis' teachings, or the priorities espoused by the majority of the 45,000 Catholic sisters in the United States (nearly 660,000 in the world) and the approximately 95,000 worldwide members of Opus Dei. All sides believe they are being faithful to God's will.

Karl Rahner, one of Catholicism's greatest theologians, once wrote that there have been three pivotal moments in the history of the church. The first was early Jewish Christianity defined by the events of the death and resurrection of Jesus. The second, which followed quickly, was the community structured by Acts 15. This allowed Christianity to become established in the Greco-Roman world such that it would become the major faith tradition of Western civilization. Finally, according to Rahner, we have the transition begun in the Second Vatican Council. In this, the Western church began to become a truly world church. Acts 15 might be just what we need to discern what the Spirit would call forth from the polarizations of our day.

Ostensibly, the problem that divided the early community had to do with circumcision. But as Rahner points out, the Judean faction rightly realized that once circumcision was no longer required, such things as the centrality of Jerusalem, the Sabbath, the accepted Scriptures and moral traditions could all be in jeopardy. In simplistic terms, the question was whether one had to be a religious Jew in order to be a Christian. When baptism replaced circumcision, women and gentile disciples were as legitimate as any male Jew. This debate was not about a simple surgical procedure!

As a result of it, the future for followers of Jesus would be as different from the Jewish past as the heavenly Jerusalem was from the world in which Jesus had been tried and condemned to death.

Through a process that presaged Francis' synodality, the church debated and prayed. They surely argued and came to tears. Finally, they arrived at the point that they could say to the whole church, "It is the decision of the Holy Spirit and of us not to place undue burdens" on the gentile Christians.

The people of the "whole church" who met in Jerusalem came to the earth-shattering conclusion that Jewish law and practice were not essential to faith in Jesus. They saw that John's heavenly Jerusalem no longer needed a temple because God dwelt among the people. They realized that the core of Christianity was characterized by relationships of love that reflected the reign of God Jesus had preached.

It's hard for us to grasp just how bold that conclusion was. In hindsight, it's easy to affirm that the community was led by the Holy Spirit. They were laying claim to the promise of today's Gospel, that the Holy Spirit would remind them of everything Jesus had taught. More importantly for us, they realized that in doing so, the Spirit did not reproduce or tie them to Jesus' exact words. Instead, the Spirit would constantly orient them in the direction in which Jesus had led them — toward union of heart and mind with God and one another.

The fierceness of the disagreement among the disciples proved their deep commitment to the Gospel message. When they gathered to debate and pray, their commitment only grew deeper as they recognized the Spirit working through them, forming them into a community more attached to Christ than to their opinions.

In the words of the preparatory document for the upcoming synod on synodality, they gained the "ability to imagine a different future for the Church" because they all took part in "processes of listening, dialogue, and community discernment."

As we prepare for Pentecost, we realize that once again, we can devolve into competing sects or collaborate with God's unifying grace. The future of the church is in our hands. Today again, we are called to believe strongly enough in the promise of the Spirit that we will risk dialogue and discernment, the synodality which God expects of us in the third millennium. It is possible that we too will be able to say, "It seems good to the Holy Spirit and to us that …"

This story appears in the Synod on Synodality feature series. View the full series.
A version of this story appeared in the May 13-26, 2022 print issue under the headline: God expects our synodality.