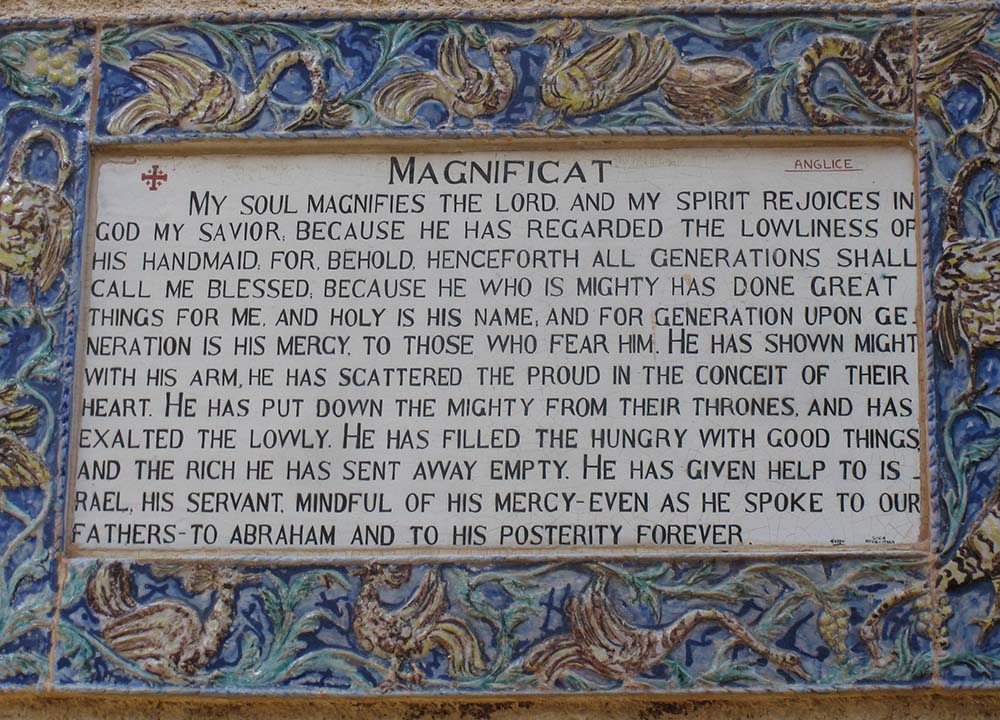 A plaque of the Magnificat in English is seen at the Church of the Visitation in Ein Karem, Jerusalem. (Wikimedia Commons/Deror avi)

The Catechism of the Catholic Church tells us that the feast of the Assumption of the Blessed Virgin celebrates the belief that at the end of her earthly life, Mary was "taken up body and soul into heavenly glory" in a "singular participation in her Son's resurrection."

Although the Book of Revelation does not identify Mary as the woman portrayed in today's selection, tradition has seen her in this mother whose son was in danger and as the woman clothed with the sun and crowned with stars. These images morphed to portray Mary as a queen. (Thirteen of the 55 titles of Mary in the Litany of the Blessed Virgin call her a queen.)

Solemnity of the Assumption of the Blessed Virgin Mary

From a different perspective, Swiss psychiatrist Carl Jung is reputed to have appreciated the proclamation of the Assumption as the church's best expression of full acceptance of the feminine.

Critics have added that even if the hierarchy wasn't ready to accept everything it implied, the teaching affirms that ordinary people of flesh and blood are created with the capacity to share divine life.

In truth, neither church nor society has probably ever been quite ready for Mary of Nazareth and all that she implies for the rest of our race. Rather than celebrate her simplicity as one of us, we typically depict her with crowns and halos, imagining her as the pinnacle of beauty. And we rarely depict her with a skin tone that is anything but white. But what about the Mary of the Gospels? Who was that Jewish woman?

Luke tells us more than anyone else about Mary, primarily in the infancy narratives. At the Annunciation, Mary spoke in the name of humanity and gave her yes to God's desire to dwell among us.

After that, as we read in today's Gospel, she began the down-to-earth activity of preparing for what would happen; she sought out Elizabeth, the elder whose experience came closest to her own.

In telling of that visit, Luke portrays Mary singing a song of praise based in the Hebrew Scriptures and prefiguring the essence of what her Son would preach. When sung out of liturgical context, the song could be labeled subversive or even communist.

Mary of the Magnificat has no pretensions. Decidedly non-regal, she refers to herself as a slave, using the same word that describes Jesus in Philippians 2:7. But except for proclaiming God's goodness to her, the focus of Mary's song is not on herself. Her song is a proclamation of faith, a practical creed praising God's ways without any philosophical concepts.

The first article of Mary's creed proclaims that those who stand in awe of God's majesty (fear of the Lord) will learn how God's mercy outshines even the splendor of all creation.

Then, perhaps as an explanation of God's mercy, she goes on to sing of how God upends all worldly values and expectations. The proud lose their way (and just maybe, embarrassment at their confusion may save them from themselves). The mighty discover to their terror that their power offers no ultimate safety net, while the lowly who trust in God fear nothing. The hungry who know how to share enjoy fulfillment while there will never be enough to satisfy those who count on their own wealth.

At the end of her psalm, where Catholics might pray the "Glory Be," Mary sings the praises of the God of Israel, the God who has remained faithful throughout their history and promises to be their future.

The song of the mother of God is Luke's gift to us. As we ponder her assumption into the realm of God, Luke invites us to contemplate the God of real life and history whom she proclaims. Mary's song urges us to recognize God's activity in the everydayness of our world. She points to where we can find God working among us and warns us about the possibilities of losing our way.

As we celebrate her Assumption in body and soul, Mary's canticle tells us where we will find our own salvation.

Mary's creed leads us to seek God in the times and places where the lowly are cherished and the hungry filled. Everything about this feast urges us to appreciate flesh and blood — to appreciate it so much that we do everything possible to save the powerful from their pretensions, to help nourish every kind of hunger and to receive and share God's own mercy.

The more we are able to do that, the more we will sing with her, "My soul proclaims the greatness of God who loves and blesses the lowly — including me."

A version of this story appeared in the Aug 6-19, 2021 print issue under the headline: Mary's creed.