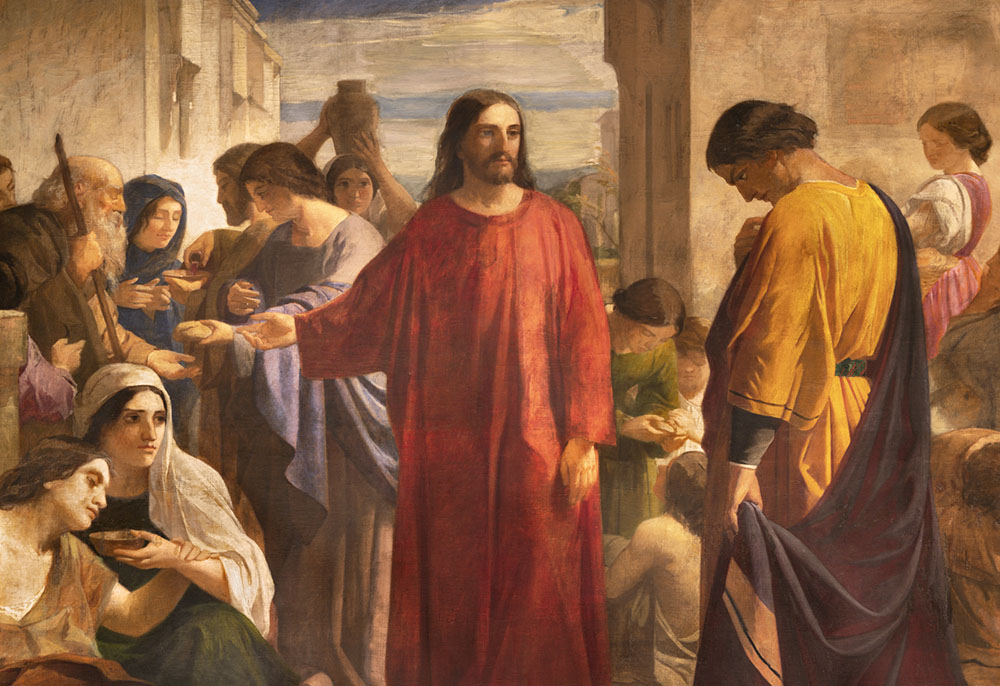 Detail of a 20th-century painting of Jesus and the rich young man in the Church of Santa Maria de Montalegre, Barcelona, Spain (Dreamstime/Jozef Sedmak)

A Google search on the concept of inheritance uncovers a plethora of information on genetics and biology. Next comes information about legal traditions regarding the passing on of a family's wealth. Some ancient literature explored the idea of the inheritance of virtue or vice, including the good name of a family.

Thinking about that variety throws interesting lights on Mark's story of the man who ran to Jesus, knelt before him, and asked, "Good teacher, what must I do to inherit eternal life?" Was the petitioner hoping for adoption into God's family? Was he looking for an entrance ticket into the afterworld of the blessed?

No matter the idea he had in mind, he clearly perceived the inheritance of eternal life as some kind of transactional process by which he could earn favor from God. If he could understand the requirements, he had the power to handle the rest.

In response, Jesus simply asked only if the guy lived like a genuine member of the family. Did he fulfill their religious precepts? At this stage, Jesus spoke only about keeping the law.

The man's unequivocal response was, "Yes! I have observed the commandments from my youth."

Interestingly, the list of commandments Jesus mentioned omitted the ones that move a person from the realm of obedience into devotion, the ones that make God the center of one's life.

Mark tells us that having heard of the man's obedience, Jesus "looked on him and loved him." That love moved Jesus to invite the fellow to embrace the fullness of the first commandments: to love God with such abandon that he would hold nothing back and then rely on God's providence like Jesus did.

That proved to be too much — at least for the moment. The man apparently desired the sort of eternal life he could earn and guard in safety for the future. He probably would not have thought of himself as stingy, but prudent.

Perhaps that's the way he read Wisdom's words: "I prayed and prudence was given me, I pleaded and wisdom came to me." Reading only that much, he indeed followed the Scriptures. But he missed the section that explains genuine wisdom costs everything one possesses.

Jesus invited the wealthy man to live into wisdom's approach to life, an approach that appreciates possessions as a means to communion. The man went away sad because he couldn't see his way through to distributing all he had to the poor. It was unreasonable to think that he should!

Sharing the man's sadness, Jesus explained that the fellow had not yet become the master of what he owned. Although he was seeking the kind of life Jesus offered, his affluence held him captive. His goods had such a grip on him that he couldn't break free to fulfill his deepest desire.

St. Ignatius of Loyola would have invited him to cultivate the "holy indifference" that frees us from being consumed by a desire for either wealth or poverty, fame or infamy, but opens us to whatever best serves and gives glory to God.

There's nothing in the Gospel that demands that everyone be like St. Francis and give away all their possessions. At the same time, every line of the Gospel warns us about the ways that a desire for more — be it of goods, prestige, luxury or power — diverts us from our greatest potential.

We don't know what happened to this man down the line. He might have been so haunted by Jesus' offer that he eventually came around like Nicodemus and Joseph of Arimathea. He might have concluded that Jesus' demand was irrational and therefore chose a life of obedience to the law.

We hear this story today, not to critique the would-be follower, but to look at our own lives in its light. The story calls for an evaluation of what we own, from our material goods to our independence. Does ownership free us to live and give or does it tie us down and make us frightened of loss? Do big houses allow us to have wide, open doors, or do they lead us to build walls with gates to control who enters?

Eternal life is a birthright, an inheritance no one can earn. It has the potential to draw us into the company of people who are irrationally generous and blessed a hundredfold. Today's question is, "What must we do to be open to our inheritance?"

A version of this story appeared in the Oct 1-14, 2021 print issue under the headline: A story of inheritance.