Twenty-Ninth Sunday in Ordinary Time: To be great, be a servant 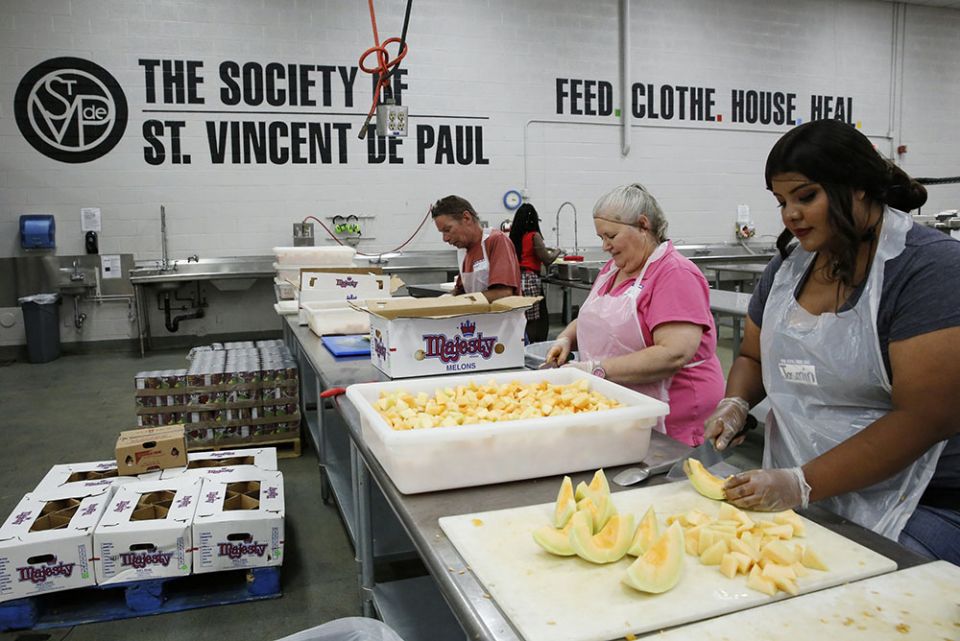 In the kitchen of the Society of St. Vincent de Paul in Phoenix in June 2016, volunteers prep food for struggling families and individuals. (CNS/Nancy Wiechec)

"The Lord was pleased to crush him in infirmity." Who wants to hear this? Would this message move people to discipleship? It seems pretty certain that James and John had not thought that this "Servant Song" from Isaiah applied to Jesus before asking him to put them at his right and left hands!

Lutheran pastor and theologian Dietrich Bonhoeffer's writings might help us focus Isaiah's Servant Song and today's Gospel. While in a Nazi prison, Bonhoeffer reflected that all people turn to God for help when they are "sore bestead." On the other hand, he said that those who have been captivated by Christ turn to God when God is "sore bestead."

Bonhoeffer believed that Christians stand by God in God's hour of grieving: when God is poor, scorned, homeless and hungry, "whelmed under weight of the wicked."

Bonhoeffer critiqued "cheap grace," the practice of Christianity that seeks the protections of status and power yet avoids the cross. Bonhoeffer teaches that "cheap grace is the grace we bestow on ourselves."

Cheap grace includes forgiveness that does not require repentance, baptism without commitment, communion without consecration to a life of discipleship.

In today's Gospel, we meet James and John, who were enthralled by their own concept of the messiah and ready for all the spoils of Jesus' victory. They ignored what Jesus had said was at stake for him and his followers.

Responding to their request to reign at his right and left, Jesus didn't talk about coming into his glory through a battle with demons or evil earthly power, but rather through his baptism and the cup he would drink.

When we consider those two images, we begin to understand how countercultural they were. People didn't baptize themselves. To be baptized implied submission to the ministry of another and the reception of a new identity and relationship to God. Baptism demanded a readiness to have one's life turned around and oriented only to God.

Jesus' cup, as he defined it, was his life's blood shed, the cup that even he asked to be rid of, if only it were the will of God. In baptism, responding to the Father who named him the beloved son, Jesus accepted the commitment to be faithful, no matter the cost. His cup, offered symbolically at the Last Supper and accepted in the Garden of Gethsemane, was the fulfillment of that commitment.

What we often miss in considering these readings is that Jesus' acceptance of his baptism and cup was not only obedience to the Father, but a revelation of what the Father is like. The God who was "well pleased" in him was the God with whom he shared the vulnerability of love that does not count the cost. Jesus revealed the God who knows hours of grieving for love of the homeless and hungry, for those who suffer under the power of the wicked.

Time and again, the Gospel comes back to the formula Jesus gave at the end of today's Gospel: Whoever wishes to be great will be a servant.

St. Vincent de Paul explained the costly grace of the Christian vocation when he told his followers: "Let us work with a new love in service of the poor, looking for the most destitute and abandoned among them. Let us recognize that before God they are our Lords and masters, and we are unworthy to render them our small services."

Time and again, the Gospel comes back to the formula Jesus gave at the end of today's Gospel: Whoever wishes to be great will be a servant.

If we let Bonhoeffer and St. Vincent teach us, we realize that those who stand at the right and left hands of Christ may not have free use of their own hands. That is because, as Jesus warned Peter, their hands may be stretched out and tied by their captors. In other cases, their hands will be full of food for the hungry and medicines for the ill, or even already fully occupied by holding children and giving support to the infirm.

The closer we are to Jesus' right and left, the more we will be like him: hands, hearts, souls and minds fully occupied in the service of those who need the most.

Today's selection from Isaiah says, "Because of his affliction, he shall see the light in fullness of days," and, "the will of the LORD shall be accomplished through him." This underlines the idea that God's servants share the ache of the divine heart and God's desire to respond to need. That was evident in Jesus of Nazareth. The God we meet in Jesus is the one whose life is love.

The nearer we come to God the more we will share in God's glory: passionate, self-giving. Then we will understand the invincible power of vulnerable love.

A version of this story appeared in the Oct 1-14, 2021 print issue under the headline: To be great, be a servant .

Column | Twenty-Ninth Sunday in Ordinary Time: To be great, be a servant