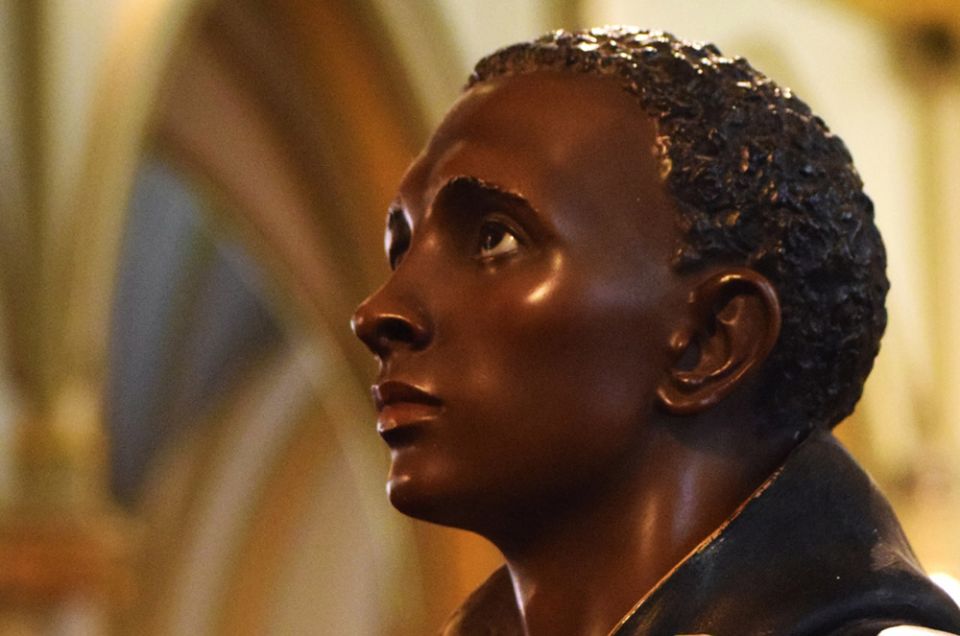 A statue of St. Martin de Porres stands at the entrance of St. Augustine Church in Washington, D.C. (CNS/Elizabeth Bachmann)

"If your hand causes you to sin, cut it off." Did you ever wonder what your Sunday church community would look like if we took Jesus' commands literally? Among those of us who so blithely repeat the words, "I confess to you my brothers and sisters that I have sinned," how many would still have a hand?

Happily, we assume that Jesus was speaking in hyperbole. He knew his own and he wanted them fit to hit the road and evangelize in spite of their weakness.

More to the point, Jesus knew what he was about, and he wanted his disciples to understand that as well. He was a teacher and healer, not a cop watching for infractions, or a bouncer ready to banish people who didn't fit narrow criteria.

It seems that Jesus appreciated the value of helping people laugh at themselves. The folks he worked with wanted to do their best; they wanted to achieve and were therefore easily detoured by their excess of desire to do well. The harder we try, the more susceptible we can be to focusing on ourselves.

That's why Paul preached about the danger of the law. Efforts to follow the law perfectly can convert us into perfect automatons; measuring everything by an objective standard creates ever greater certainty as it overlooks the flesh-and-blood people the law was created to serve.

Last week, we heard about how the disciples got caught in one-upping each other. This week, we meet them doing the same as a community. Like pharmaceutical companies founded to provide healing remedies that end up pursuing profit over public health, they often missed the point of their call. Their jealousy about a stranger who spoke in Jesus' name was but one version of the misguided competition often played out between religions and denominations and within each tradition.

The disciples were ready to stop someone from exercising Jesus' mission because, in contemporary language, the person was not "orthodox" or in good standing among them. Clinging to their in-crowd status detoured them from the very reason they were called.

Mark wants us to appreciate the ironic humor of how their attachment to rank contradicted the very goal they wanted to promote.

The disciples' tendency to exclude others from the mission was not a one-time affair. There was a time when church law would not allow a man to be ordained if he were maimed or had particular physical impediments or, in some times and places, if he, like St. Martin de Porres, was not of the dominant culture or ethnic group. It didn't matter that such a person might be holy or unusually gifted as a preacher or minister.

For religious sisters and brothers, a scandal in their family was once enough to prevent them from being accepted into a congregation. Today, some still hold nonbiblical assumptions that gender unquestionably disqualifies half of humanity from serving in particular ministries in the Roman Catholic Church.

The disciples' consternation about an "unqualified" person healing others in Jesus' name foreshadowed the struggles the early Christian community would have with accepting non-Jews into the fold. Jesus responded by reminding them of the purpose of discipleship.

According to the Master, their goal was to promote the reign of God throughout their world. Whoever did that was a legitimate participant in his mission, an apostle of his message.

With his characteristic sense of humor, Jesus informed his self-important disciples about just exactly how much privilege they should expect for their exalted rank: "If someone gives you a cup of water because of your rank with me, blessed are they!" Most of them were probably hoping for a lot more than a drink!

Underlying it all, whether speaking of then or now, everything about ministry in Jesus' name revolves around activity that promotes the reign of God.

According to Jesus' criteria, those who carry on his work are his co-laborers, no matter what impediments or disqualifications others might wish to put in their way. Disciples and apostles are recognized for how they serve others. That trumps everything else.

Jesus' message calls us to get over labels like progressive or conservative and to abandon the restrictions we place on others due to conditions that have nothing to do with their ability to promote the reign of God. The community of disciples has room for everyone except those who would limit the kind of people who are acceptable among them.

It's time to take it seriously when we say to one another, "I ask you, my brothers and sisters, to pray for me." Then we will realize that we are all maimed and capable of proclaiming the reign of God.

This story appeared in the Sept 17-30, 2021 print issue under the headline: Room for everyone .

Column | Twenty-Sixth Sunday in Ordinary Time: Room for everyone

God made the world for all, not for a few