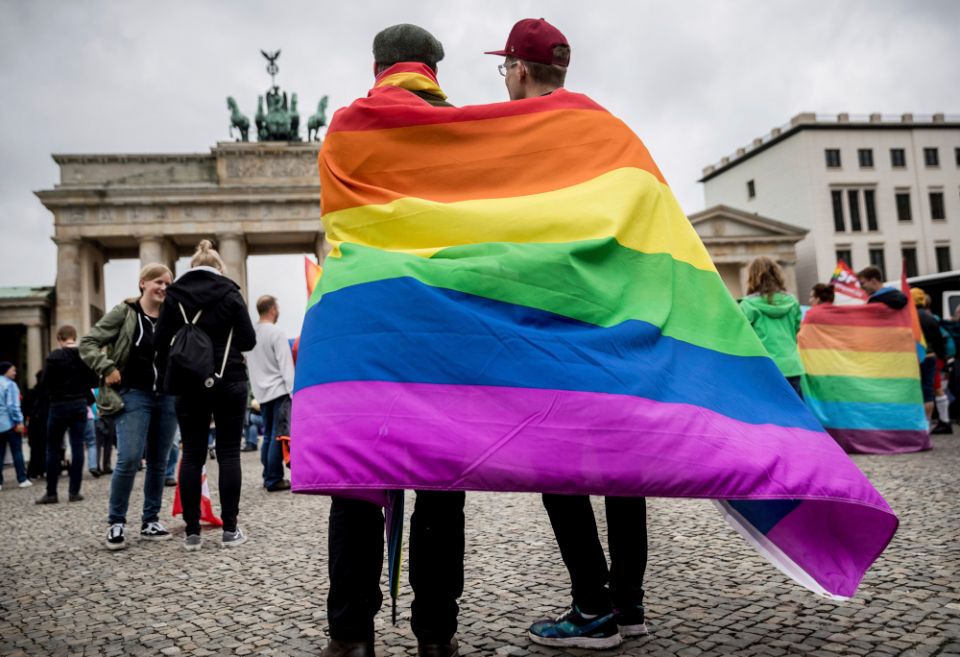 People with rainbow flags stand in front of the Brandenburg Gate at an event organized by the Social Democrats to celebrate the legalization of same-sex marriage in Berlin, Germany, on June 30, 2017. (Michael Kappeler/dpa via AP)

Since the Catholic Church forbids celebrating marriage between people of the same sex as a sacrament, some Catholics, and even some bishops, have discussed having a blessing for such couples as an alternative.

On March 15, the Congregation for Doctrine of the Faith, the chief doctrinal office in the Vatican, responded to queries about this possibility with a firm no. "It is not licit to impart a blessing on relationships, or partnerships, even stable, that involve sexual activity outside of marriage," said the congregation.

To sum up, the Vatican is calling on the church to welcome gays "with respect and sensitivity" while at the same time telling priests not to bless their unions.

This fine distinction will make no sense to many American Catholics, especially those who are gay and believe that respecting a person includes accepting their choice of a life partner. In Germany it will put a chill on efforts by the country's Catholic bishops to consult the faithful on a number of topics, including gays, though a multiyear synodal process.

Granted how much Pope Francis talks about the synodal character of the church, it is disappointing to see attempts to short-circuit this process in Germany.

This preemptive strike, however, will not succeed. The discussion will go on, explained Bishop Georg Bätzing, president of the German bishops' conference, even as "points of view put forward today by the Congregation for the Doctrine of the Faith must and will naturally find their way into these discussions."

The congregation made clear that Francis "was informed and gave his consent" to publication of the document. My guess is that he was given the document right before he left for Iraq and deferred to the congregation rather than subject the document to a close personal review. It lacks the pastoral sensitivity that has marked his papacy. Too bad he did not set it aside for more thought and consultation.

Pastorally, the Vatican feels that most people will not see a distinction between blessing a gay union or sacramentalizing it. If you reserve a church for a ceremony, have music and flowers, dress up and walk down the aisle and are blessed in the sanctuary by a fully vested priest, most of the people in the congregation will not recognize any difference between this and the sacrament of marriage.

Theologically, blessing same-sex couples "would constitute a certain imitation or analogue of the nuptial blessing," which can only be given to married couples, said the congregation, which believes that such a blessing would "approve and encourage a choice and a way of life that cannot be recognized as objectively ordered to the revealed plans of God."

In short, "God cannot bless sin." This will go down as one of the most pastorally insensitive statements coming from the Francis papacy.

What can be blessed must "be objectively and positively ordered to receive and express grace, according to the designs of God inscribed in creation, and fully revealed by Christ the Lord," states the congregation.

We can be grateful that the document does not refer to homosexuality as "intrinsically disordered," as have earlier church documents. Although for the church the phrase has always been a theological judgment, meaning not "objectively ordered to the revealed plans of God," it has incorrectly been interpreted as a psychological diagnosis, causing great pain and confusion among gay people and their friends. Hopefully, "intrinsically disordered" has been consigned to the dustbin of theology.

It must be emphasized that the congregation's document deals with marriage and blessings in the church, not civil marriage. Francis has recognized the need for legal recognition of gay unions, although he would prefer that such arrangements be called civil unions rather than marriage.

While to Americans the pope appears to be behind the times, he is revolutionary in many other parts of the world, especially in the 71 countries where gays are still criminalized. In these countries, church support for decriminalizing gay sex and legalizing gay unions would be great progress.

Hypocrisy can be a leaven impeding spiritual growth, pope says

A long time with Jesus in the wilderness