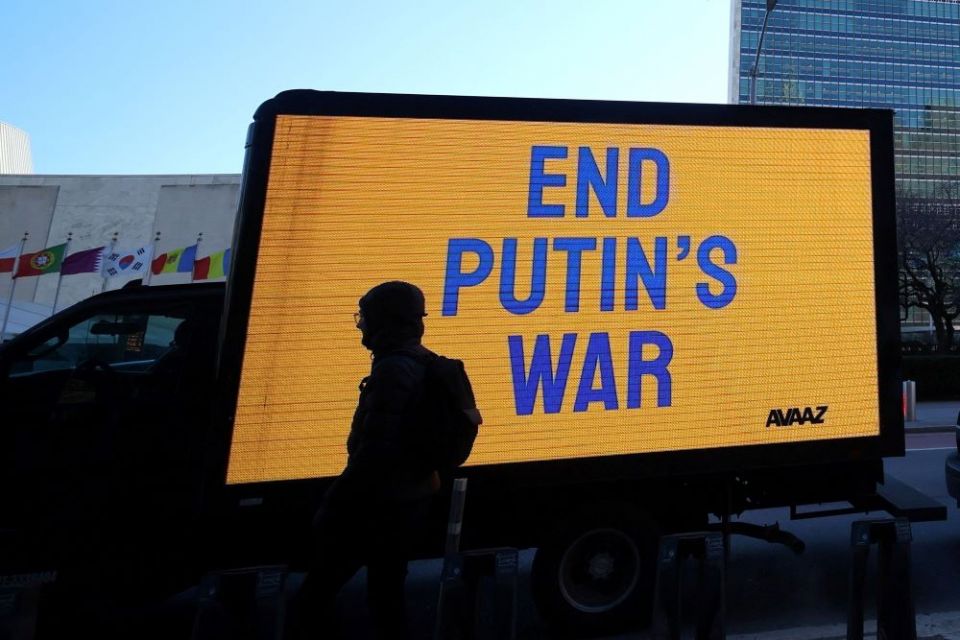 A truck displays an electronic message while protesters demonstrate outside United Nations headquarters in New York City, as diplomats inside hold an emergency session of the 193-member U.N. General Assembly on Russia's invasion of Ukraine Feb. 28. (CNS/Reuters/Mike Segar)

If you had any lingering doubts that the neoconservative Catholics of old have given way to neofascist Catholics of today, you can set those doubts aside. The reaction of some prominent Catholics to the war in Ukraine was appalling and shows the degree to which any kind of moral acuity has vanished from certain sectors of the American right.

On Feb. 24 and 25, every time I turned on the news, the tears came easily. It was not just the horror of war. More than that, it was the bravery of the Ukrainian people. When President Volodymyr Zelensky spoke to the Russian people in their own language, pleading that war be averted, it was impossible not to realize that he surely knew he might soon be killed. He pleaded for peace, for decency and for democracy. Zelensky rose to the moment in a way I had thought politicians no longer did, that only in the olden times did such personal, physical courage manifest itself on the part of a politician.

Laura Ingraham of Fox News was not moved by President Zelensky's passionate address to the Russian people as the invasion seemed imminent. While interviewing former President Donald Trump, she called Zelensky's speech a "pathetic display." She also said Ukraine's ambassador to the United Nations, Sergiy Kyslytsya, looked like a "defeated man" when it was Kyslystya's defiance and moral clarity that were most striking. He, like Zelensky, spoke as champions of democracy and human dignity. Perhaps Ingraham is so morally compromised by her long, sycophantic relationship with Trump that she is incapable of recognizing a democratic champion when she sees one.

(Listen to the rest of the clip. Trump apparently thought Ingraham had revealed U.S. forces had launched an amphibious invasion of Ukraine, and complained that the Biden administration should not have been using her to reveal such a momentous thing. Of course, he misunderstood and Ingraham explained it was the Russians who were mounting an amphibious invasion, not the U.S. But, think about that: Trump entertained a thought as preposterous as thinking the Tooth Fairy is real. If Biden had done such a thing, how would Ingraham have reacted?)

Ingraham was not the only Fox News commentator to let the world see her fascist sympathies. Fox's own longtime national security correspondent, Jennifer Griffin, spent the weekend correcting other guests on the network. Some were mouthing hawkish foolishness and others were peddling appeasement foolishness. Taken together, it is hard to take the network seriously, but then you remember it has higher ratings than either MSNBC or CNN, so we had better take it seriously.

First Things' columnist Sohrab Ahmari did not embarrass himself on television, but on Twitter. He was quick to repeat Putin's talking points as the invasion unfolded. "No more NATO expansion. Period," he tweeted. "Stop this foolish liberal-hegemonic dream that puts ordinary people in harm's way." Of course, the Ukrainians had not been put in harm's way by NATO, but by Putin.

In another tweet Ahmari wrote: "The rights of nations are circumscribed by geography, history, economics, chance. Above all by power: The 'freedom' of a nation to do X is a matter of effective action, the power to coerce/not be coerced. Ukraine's 'friends' sadly led her to believe she could escape these laws.”"

I am not sure what to make of this fascist nonsense. We Catholics subscribe to natural law but I do not recall reading anything so viciously unconcerned with justice in the writings of St. Thomas Aquinas, still less in any magisterial teaching from a pope or a council.

Eric Sammons, editor of Crisis magazine, took to Twitter to claim it was Ukraine that was spreading misinformation, not Putin. "I would guess that at least 90% of the images, videos and stories on social media purportedly coming from Ukraine are either completely false, mostly false, or twisted to push a narrative." Guess? Any proof? I would guess that the Easter Bunny is going to get caught driving under the influence, but what do I know?

J.D. Vance, a Catholic convert and candidate for the U.S. Senate in Ohio, did not so much repeat Putin's propaganda as display a Trumpian "America First" stance, albeit on immoral steroids: "I gotta be honest with you, I don't really care what happens to Ukraine one way or another," Vance said in an appearance on Steve Bannon's "War Room."

Someone must have whispered into his ear that Ohio is home to a large population of Ukrainian Americans, so he soon changed his tune, issuing a statement expressing his deep concern about the war.

Our friends at the Polish Institute for International Affairs published an interesting paper on how Russia was using disinformation to justify its unprovoked attack on Ukraine. Most of the Russian claims are so ridiculous, they would be laughable if the people spreading the lies were not also spreading violence.

Ingraham, Ahmari et al. were only too willing to swallow the Kremlin's talking points, and repeat them, at least until it became obvious that the entire world expressed its revulsion at Putin's assault on Ukraine. Phlegmatic European diplomats, who know a thousand ways to say "patience" but have difficulty with moral clarity, sounded positively prophetic in their jeremiads against the war and the authoritarian dictator who started it. The Swiss — the Swiss! — froze Russian assets. The Swiss never freeze assets.

I watched Ingraham's entire show Monday night. She had changed her tune, but she did not correct anything she had said previously. Mostly she tried to refocus the conversation on the threat to American security posed by China. I suppose that is a kind of progress. Still, let no one forget the slavish apologies for Putin's fascist regime these Catholic scoundrels were only too ready to make their own. Let that moral stain be indelible.