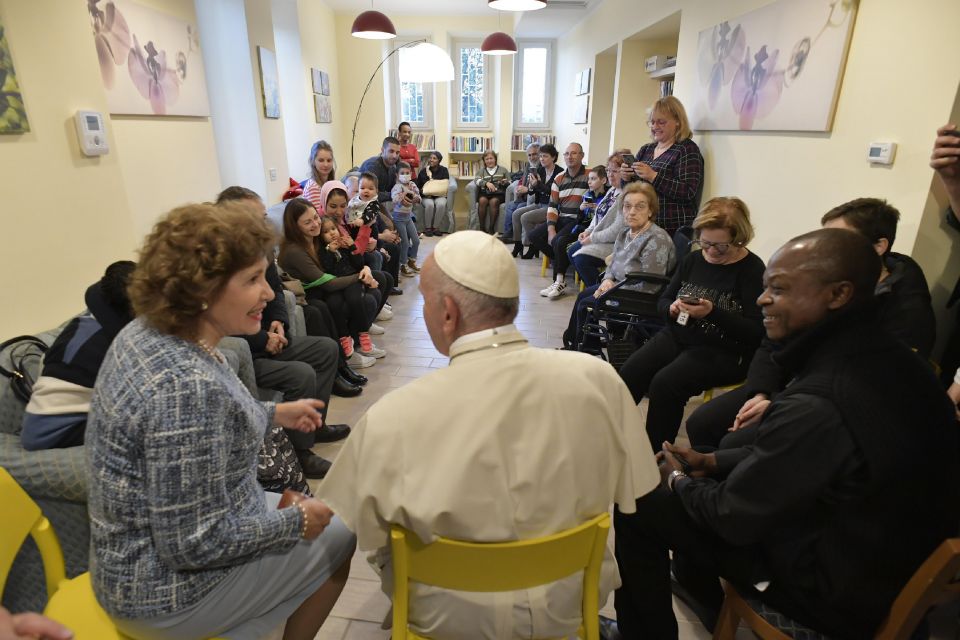 Pope Francis visits poor, sick people at a center run by the CasAmica Onlus organization on the outskirts of Rome Dec. 7, 2018. The visit continued the pope's tradition of doing Friday works of mercy. (CNS photo/Vatican Media)

In March 2013 Jorge Bergolio stepped out onto the central balcony of St. Peter's Basilica and spoke his first words as pope. Before imparting his blessing Papa Francisco requested a favor: "Before the Bishop blesses his people, I ask you to pray to the Lord that he will bless me: the prayer of the people asking the blessing for their Bishop. Let us make, in silence, this prayer: your prayer over me." With this request for a blessing, "esta oración de ustedes por mí" we Latin@s knew that this one at last is bone of nuestros huesos, y flesh de nuestra carne, this pope was Latino! His request for the blessing from his own people was familiar to any hijo or hija walking out the door to escuela, to any querida o querido embarking on a journey, these were the words of nuestra vida cotidiana, of our daily living. They required no translation. Many Latin@s already knew from their personal experience the daily practice of being blessed by one's parents and loved ones.

This pope knows our ways because they are his ways. He recognized our Hispanic presence and our youth through his first virtual visit to the USA, a cyber journey to a high school in Chicago, Illinois, and to immigrants and those who ministered with them in McAllen, Texas, y Los Angeles, California. These video chats in real time preceded his landing in Washington, D.C., a few weeks later. He chose a path via Cuba reminding all of us that the journey of Catholicism to our hemisphere went through indigenous lands that became the Spanish-speaking Caribbean.He turned to our southern border, nuestra frontera, on his trip to Mexico in 2016 again reminding us all that a visit to Ciudad Juárez is a visit to El Paso, Texas! No wall can get in the way of his merciful blessing!

Like many of us who live and operate at the intersections of multiple languages, Francisco transgresses linguistic boundaries. His Spanish is peppered with Argentinian colloquialisms, insider references to soccer and tango, vocabulary that hints at the street and home languages that arise when immigrants merge the tongues of origin and receiving nations. When there are no suitable words he creates his own neologisms. For example, in his book, The Name of God is Mercy, Francisco explains that for him mercy is not a noun, it is a verb, and the Latin miserando does not translate well into either Italian or Spanish, or even English for that matter. So he decided "I like to translate miserando with a gerund that doesn't exist: mercifying " (12) or misericordiando in Splatin, the creative mixing of Spanish and Latin.

For Francis, his search for words that express mercy is rooted in a profound experience of being mercied. In the book he recalls that he was 17 years old, he brought the burdens of his heart to the sacrament of penance. He never says what it was that troubled him but speaks only of Padre Carlos Duarte Ibarra who mercied him. A year later Duarte Ibarra died from leukemia. Francisco recalls, "I still remember how when I got home, after his funeral and burial, I felt as though I had been abandoned. I cried a lot that night, really a lot, and hid in my room. Why? Because I had lost a person who helped me feel the mercy of God." (11) It was the profound experience of being mercied that influences his theologizing to this day.

A close look at misericordiando reveals at its center, not the word for pity, but the Latin root of the word for heart, cor, corazón in Spanish. To mercify is to love. He draws on images from lo cotidiano on the margins to illustrate the mercy of God.  Such mercy is not an abstraction. Francisco witnesses it in the mothers and spouses lined up outside of prisons on weekends to bring food and gifts to their incarcerated sons and loved ones, regularly undergoing the humiliation of being searched, yet refusing to disown their loved ones simply because they have gone astray. (73) Francisco tells us that all of us are in need of these mercying acts — even the richest, most healthy, well-fed citizen. Why? Because the dead cannot bury themselves — even those who have everything in life, at the end are still dependent upon the mercy of others to honor their bodies with respect.

Francisco pays a price for his latinidad and for his theologizing that seeks its loci in the dailyness of life. To locate God-talk in the messiness of nuestras vidas cotidianas, to articulate it in the complicated hybrid languages of street and home, to mercify in ever expansive borderlands is the business of theology. The bifurcation of theology into the academic and the pastoral is a path to irrelevance. At the same time such contrived distinctions foster a climate where this pope from Latin America can be minimized as pastoral unlike his theologically sophisticated predecessor. This reductionism undergirds ongoing efforts by some of his critics to question and dismiss his authority.

Any number of Latin@́ theologians in the USA resonate with these experiences. For over 40 years we have disrupted academy and church by demonstrating that particularity in theologizing is not a mark of exclusion but a necessary manifestation of rich and ancient diversity. To do theology latinamente means respecting the inextricably intertwined engagement of teología y pastoral en/de conjunto, analyzing critically the non-innocent contexts that shape our histories and relationships, living out our commitments in accountability to concrete communities. We live and create our identities at borders, on hyphens, and @ (at) all sorts of places in English, in Spanish, and countless variations of Spanglish. As I have written elsewhere, for Latin@́ theologians who insist on theologizing from within the heart of complex identities, and see in daily lived experience sources of theology, "hagan lío," the papal instigation to make a mess, to stir things up, is a professional mandate!

In a recent address posted in NCR, theologian Massimo Faggioli asks what does it mean to be "academic Catholic theologians in this situation of ecclesial disruption"? From my Latin@́ perspective the question should be what does it mean to be a disruptive theologian? That is because for our communities of accountability the status quo that privileges certain racial, ethnic, gendered, heteronormative, linguistic, abled, clerical status and national origins is, and has been for centuries, an ongoing ecclesial and social crisis. Latin@s don't need an interpreter when our papal compadre tells theologians, "Do not settle for a desktop theology. Your place for reflection is las fronteras, the borderlands." Border spaces of all types have been among the documented starting points for generations of Latin@́ theologizing in the USA, as well sites for resistance against artificial borders, including those between so-called academic and lived theologies.

For over forty years Latin@́ theologians and biblical scholars who start on the ground with and in communities have been living the advice that Francisco offered in 2015 to theologians on the faculty of la Pontificia Universidad Católica Argentina: "We must guard against a theology that is exhausted in academic dispute or one that looks at humanity from a glass castle." He went on to employ the same metaphor that he had used with priests at the chrism Mass two weeks into his pontificate when he called ministers to be shepherds living with "the odor of the sheep." Embedded with the sheep as ministers and theologians, to the point that our scent is indistinguishable to those who prey on sheep, makes us vulnerable to the threats and dangers that our communities endure. Doing theology is mercifying and risky business!

A version of this story appeared in the Sept 20-Oct 3, 2019 print issue under the headline: To mercify is to love .

Pope Francis welcomes refugees to a new life in Italy

Bishops in Kazakhstan say no Communion for divorced, remarried Catholics