Our differences will make the difference in our future

Benedict's second principle is crucial for nourishing a better tomorrow 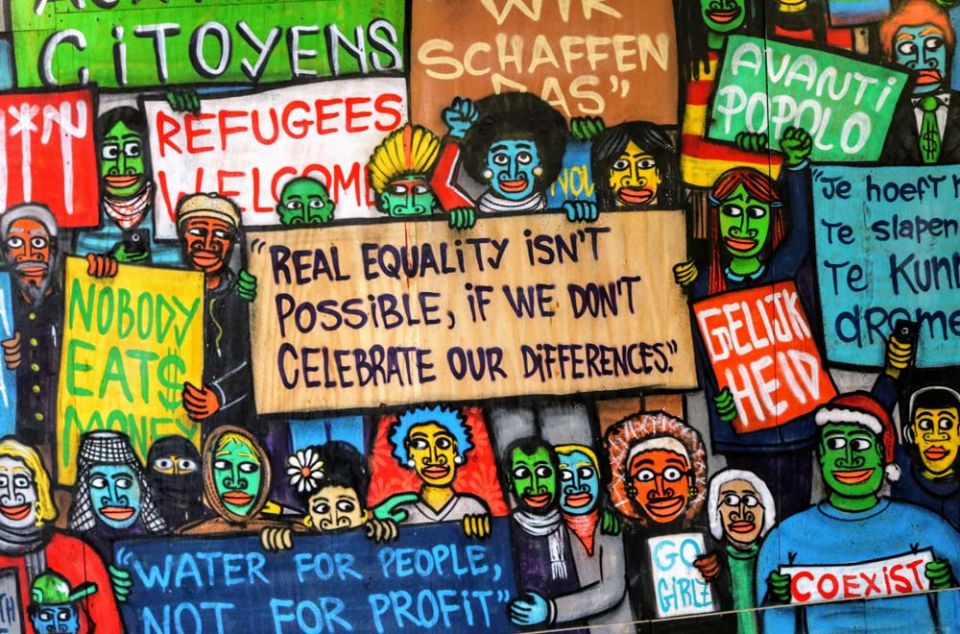 Differences are a big thing in the United States. And always have been. We love to say that human beings are all equal, all alike, all welcome, all free to participate in the purpose and fulfillment of life. And that's true — but not totally true. In fact, we have never, all of us, been anything close to that.

Whole populations have been excluded from American society and or citizenship at any given time in our history. Ask the Native Americans, African-Americans, or women.

Ask Catholics whether they got a warm welcome here in the 19th century. Ask the Chinese who were allowed to build our transcontinental railroads but were not free to seek citizenship.

Ask Eastern Europeans how it felt to integrate into the United States. Ask the Japanese what they went through trying to be seen as Americans — even to this day. Ask Central Americans and other Hispanics who have picked our fruit and vegetables for decades now how American they feel yet. How welcome. How cared for — even if they were born here in a country with a birthright clause that it is now seeking to ignore.

Related: How to save Western civilization — again

No doubt about it: Differences are a big thing. They keep a society alive. They are a well of creativity, a signal of new possibilities. They are the resources that nourish a new future for us all. Which is exactly where Benedict's second principle of life comes in.

We are told, first, to be aware of the overarching presence of God in life. Then, the second principle of humility proceeds logically from the first: If God is the driving force in our life, then the will of that Loving God will, of course, be best for us, for everyone.

If, that is, we do not try to substitute our will for the will of the Creator for creation.

But what exactly is the will of God for humankind? The answer comes back clear and simple through the Prophet Jeremiah: "I wish you well," says God, "and not woe."

Then our current mantra "America first" topples over with a thud heard round the world. Then we wonder why we never feel really secure now. Then we figure out that in order "to win, win, win," we must, of course, pit ourselves against the rest of the world. Which really means that America will never be great again. As in greatly peaceful, greatly caring, greatly trusting, greatly at peace in the world.

I can understand that for some it might feel like a stretch to use a spirituality of the sixth century as a mirror of the 21st. But the fact is that though history has changed in the interim, humanity has not.

The same emotions, assumptions, values and attitudes in one century simply keep appearing in situation after situation because they are endemic to human nature. They are the stuff of human growth — and of human deterioration, as well. The same feelings, fears, desires and aspirations appear again and again, sometimes to the glory of the human race, sometimes to our shame.

For instance, Alexander the Great set out to build the empire to end all empires and so did Hitler, but neither of them succeeded. Caesar fell out with his advisers and so did Churchill. People sent their sons to die in the French Revolution centuries ago, just as we did in ours. The Reformation churches struggled with how to honor the dogmas of the church and still renew it — and so have we.

The truth is that it's no stretch at all to compare how the human profile is still built on body and mind, matter and spirit, reason and feeling. Or as the Jewish character Shylock in Shakespeare's The Merchant of Venice puts it in his claims to be part of universal humanity in antisemitic Venice by saying,

Hath not a Jew

If you prick us, do we not bleed?

If you tickle us, do we not laugh?

If you poison us, do we not die?

Are we not all the same? Indeed, on the second degree of humility — to want "well and not woe" for everyone — rests the indestructible bond of human relations.

Heraclitus writes, "Character is fate." Are human dignity, the decency of respect, and delight in the things of creation not the real answer to human contentment, to world peace, to honorable and holy human relations?

From where I stand, that does not mean that we will have less. It does mean that we will wish for others what we need for ourselves and, with incontestable Christian character, join them in their right to have it.

A version of this story appeared in the April 19-May 2, 2019 print issue under the headline: Differences will define our future .

Column | Our differences will make the difference in our future