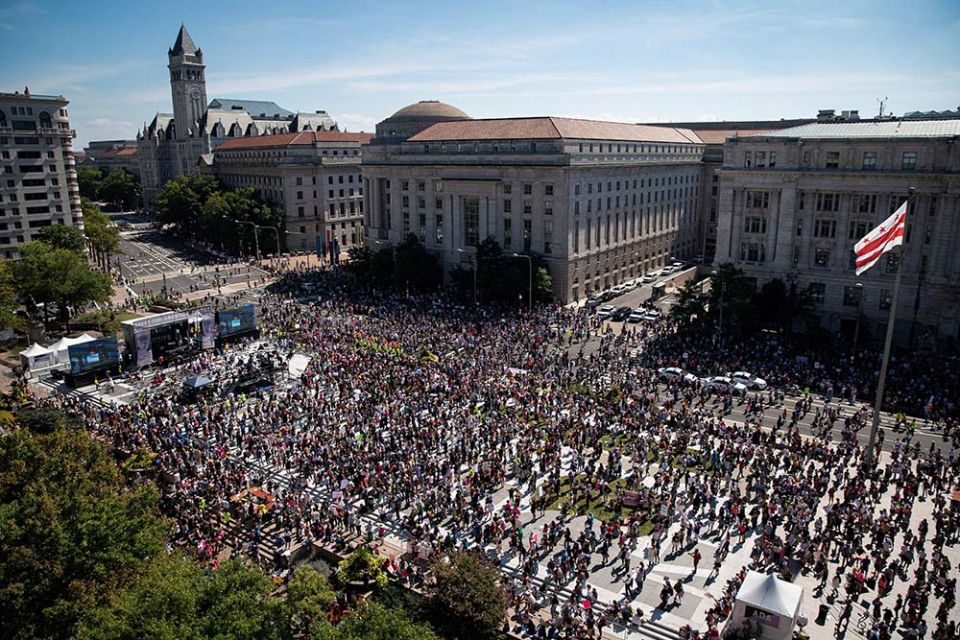 Supporters of legal abortion rally at Freedom Plaza in Washington before marching to the U.S. Supreme Court Oct. 2, during the nationwide Women's March protesting a new Texas law that bans most abortions after six weeks of pregnancy. (CNS/Reuters/Al Drago)

The last-minute Women's March on Oct. 2 was as small as the town. I showed up because it was the closest advertised gathering to my home. About 40 of us marched around the block and waved our signs on the busiest corner of Highway 101 in Nehalem, Oregon.

I'd participated in the Women's Marches throughout the last administration's tenure, from 2017 in Los Angeles to 2018-20 in San Diego. Those marches encompassed far more than reproductive rights. This little march in 2021 was targeted to protest the onslaught of anti-abortion legal measures triggered nationwide by the mess in Texas.

Why was I, a Catholic mother, holding a homemade sign on a sunny corner in support of abortion rights? The short answer is that the so-called "pro-life" advocates in the United States have turned me pro-choice. The longer answer follows.

Being pro-choice is not the same as being pro-abortion. The fact of abortion, the description of what it accomplishes, is horrifying. But pro-choice means that the decision to have a baby is every woman's to make.

Some abortions do literally save the life of the mother. Some abortions do help to alleviate the suffering of a victim of rape or incest. Regardless of the heart-wrenching circumstances of any particular situation, however, the state, in the form of a lot of Republican men, should not force a woman to give birth, any more than it should force a woman not to give birth.

The 'pro-life' voices speak and vote against the kind of social advances that would actually benefit people. The bootstraps are attached at birth.

Women can be trusted with autonomy. One can hardly think of another decision that is more private or more life-changing than becoming a mother.

I am neither a theologian nor a scientist, neither educated nor trained to ascertain when life begins or when life outside the womb is viable. Both theology and science have made different assertions and come to different conclusions through the centuries.

I'm a mom, intimately acquainted with the stages of conception and pregnancy and labor leading to all the wonder and madness that come after that moment of crowning glory. I am obviously pro-life. What I don't agree with is the "pro-life" movement that seems to concern itself with children only up until the second of their birth. Somehow, "pro-life" has given true pro-life a bad name.

Where are these abortion opponents when it comes to the strategies that might help a woman avoid an unintended pregnancy? I'm thinking about accurate and early sex education for students, as well as meaningful access to contraception as a part of universal health care for all.

What about advocating for policies that might support a pregnant woman in the decision not to abort? I'm thinking of guaranteed paid maternity leave and family leave and child care, for starters.

The "pro-life" voices speak and vote against the kind of social advances that would actually benefit people. Instead, we hear that any government programs that aid families equal the scourge of socialism, to the point where feeding lunch to elementary school students is now some kind of egregious wrongful entitlement. The bootstraps are attached at birth.

I know I'm not breaking any new ground here, but as they say, the personal is political. A trigger for me was the recent stunt by the archbishop of San Francisco to single out House Speaker Nancy Pelosi, a Catholic mother. He actually advised her fellow Catholics to "commit to praying one rosary a week and fasting on Fridays for her conversion of heart." Pelosi is a pro-choice Democrat. He wants everyone to send her roses. His campaign's nickname: "Rose and Rosary for Nancy."

What bitter poison wrapped in sugar is this? It's a naked political ploy.

Is this shepherd calling on his flock to eat less and send flowers to the Catholic politicians who support the death penalty? Who schedule legal executions? Who build walls against refugees? Who demean and excoriate the other, the ones who don't belong?

I could name a few hearts whose conversion he could pray for on a similar, catchy first-name basis.

I find I am more in line with pro-choice energy because I am so sick of the pro-life movement's blindness to policies and stances that might work, that might really impact the number of abortions. That's the goal, right? Building a child-friendly society together, rather than legislating women back to the danger of illegal abortions, would be a start.

That's why I stand on corners with other women holding signs. I am pro-compassion. If we're going to mix religion with politics, let's start by enacting the corporal works of mercy into law. Let's feed the hungry and thirsty, house the homeless, clothe the naked, care for the sick, visit the prisoners, and all that jazz that we say we believe.

Those laws supporting basic human dignity would be far more pro-life than policing every woman's womb. That kind of evangelization might really convert some hearts.

A version of this story appeared in the Oct 29-Nov 11, 2021 print issue under the headline: Why a Catholic mom marches for abortion rights . 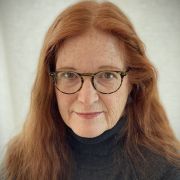 Valerie Schultz is a freelance writer and the author of Overdue: A Dewey Decimal System of Grace.

Commentary | Why this Catholic mom marched for abortion rights