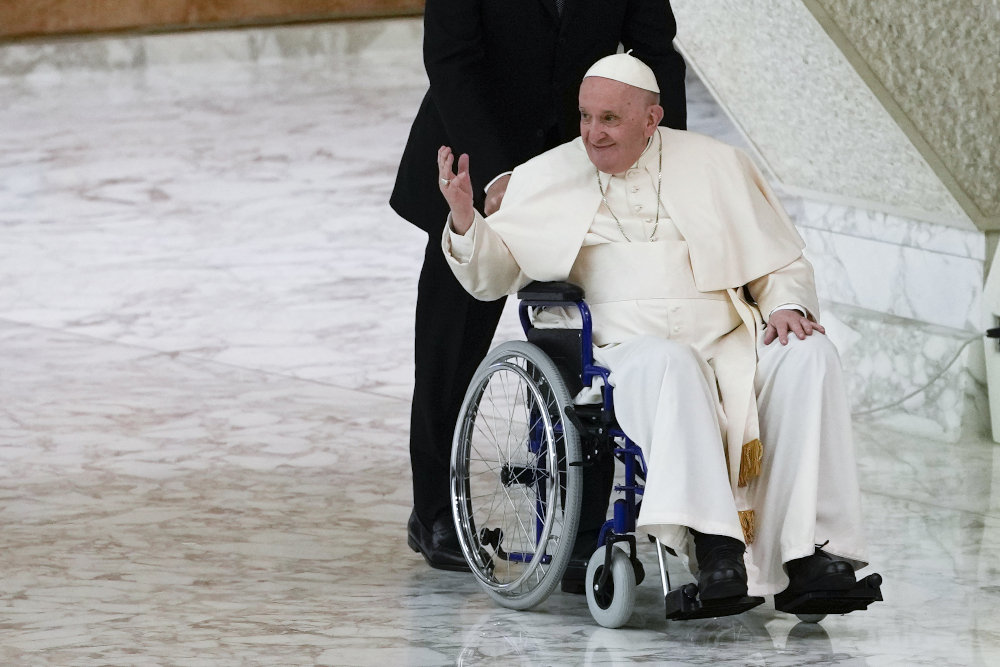 Pope Francis arrives in a wheelchair to attend an audience with nuns and religious superiors in the Paul VI Hall at the Vatican May 5. The pope is known to be suffering acute knee pain that has greatly curtailed his mobility in recent months. (AP file/Alessandra Tarantino)

If I had a dollar for every story I have seen about the possibility of the pope resigning, I could take a trip to Rome to watch the pope at work.

Why are these stories so popular with journalists?

First, the stories are easy to write: Just report the latest whispers from anonymous Roman clerics who have no real information but love to gossip. Add quotes from Italian journalists whose editors are not as rigorous in demanding evidence as American editors. Presto!

There are, of course, good Italian journalists, but some lack basic journalistic ethics. John Thavis, the former bureau chief for Catholic News Service, reported how one Italian journalist in 2013 decided to have fun by writing a totally fictitious story about how the cardinals were looking at Cardinal Sean O'Malley as a candidate for pope.

This story was picked up by other outlets, causing The Boston Globe to send a team of reporters to cover the conclave. The media coverage made O'Malley so visible that one survey found that he was the first choice of the ordinary people of Rome. In his Capuchin habit, he reminded them of Padre Pio, the popular Italian saint.

A second reason these stories proliferate is that ordinary readers eat them up. We have an appetite for rumors and gossip about famous people. Publishers know this and give us what we want.

Finally, every reporter is terrified of missing a story that ends up being true. Most reporters missed the signs of the impending resignation of Pope Benedict XVI, and they don't want to be caught off guard again. How do you explain to your editor why you missed this story?

If the pope does resign, I will end up looking like a fool for writing this column.

Still, I am willing to go out on a limb and say it: The pope is not going to resign.

True, Benedict's resignation made it easier for every subsequent pope to resign. It was always possible under canon law — in fact historians report that about 10 popes have resigned over the church's 2,000-year history. It had just been so long since the last resignation that many felt it was impossible.

Pope Paul VI, for example, said paternity cannot be resigned. He also feared setting a precedent that would subject future popes to pressure to resign. Are we seeing that today?

What made resignation not only possible but necessary is modern medicine, which can keep the body alive much longer than it is physically and mentally possible for a person to function as pope.

Even before he resigned, Benedict indicated, "If a pope clearly realizes that he is no longer physically, psychologically and spiritually capable of handling the duties of his office, then he has a right and, under some circumstances, also an obligation to resign."

Francis shares the same view. He feels that his election was a clear sign that God wanted him to be pope and he cannot set aside this duty unless he become incapable of fulfilling his papal obligations.

As Francis told Brazilian bishops visiting the Vatican recently, "I want to live my mission as long as God allows me and that's it." 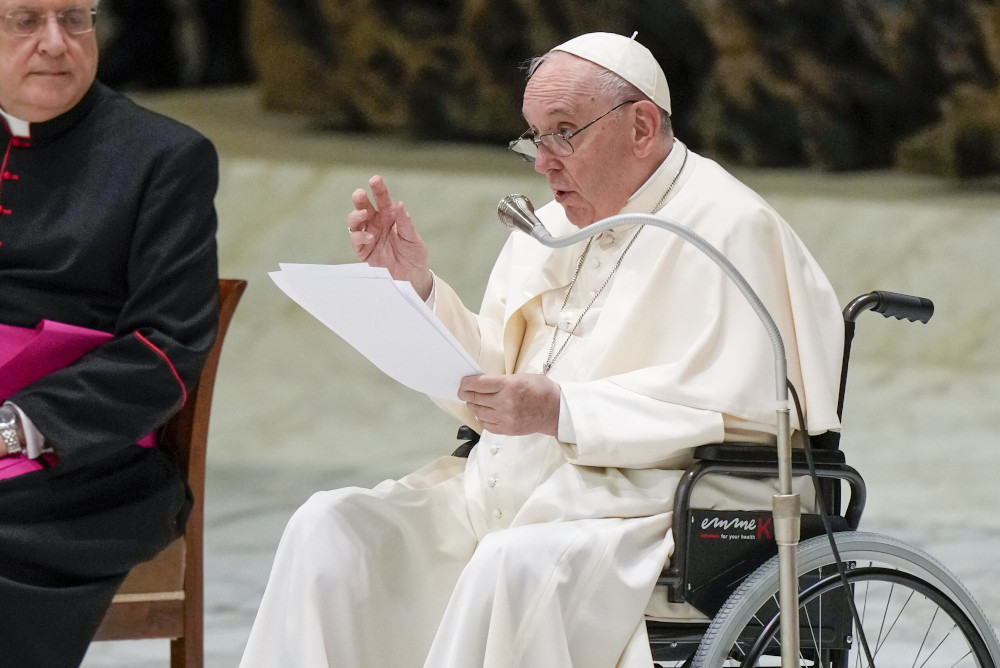 Pope Francis in a wheelchair delivers his address during an audience with members of the Italian Civil Aviation Authority in the Paul VI Hall at the Vatican May 13. (AP/Andrew Medichini)

The pope has a lot of unfinished business, and I don't see him walking away from it. Some of his reforms are just now getting started. And after setting in motion a worldwide synodal process, he will not leave it to someone else to finish.

Clearly, the pope is currently able to fulfill the most important duties of the papacy. Yes, he has a bad knee and is using a wheelchair, but there is no indication that he suffers any mental incapacity. He can think and speak clearly, he meets with people and can make prudent decisions.

Francis has been suffering from a bad knee for some time now, but he refused to use a cane despite being in great pain. This was stupid on his part. All those around him should have told him to use a cane. Instead, he kept walking on his bad knee until he was forced into a wheelchair.

If he had still been subject to Jesuit obedience, he would have been told by his Jesuit superior and prefect of health to follow his doctor's instructions and use a cane. Whether staying off the knee will now allow it to heal on its own or whether he will require surgery remains to be seen.

What is clear is that even if he had to remain in a wheelchair for the rest of his life, he could still perform his essential papal duties as long as his mind remains clear. Remember, the United States had a wheelchair-using president who got us out of the Great Depression and led us through the Second World War.

In this day and age, to insinuate that the pope cannot continue his work in his present condition shows that even the pope is not immune to the prejudice that thousands of people with disabilities suffer on a daily basis.

There are thousands of Americans in wheelchairs functioning very well in jobs. Thousands more have bad knees. To say the pope should resign is telling all these people that their positions are also at risk. Shouldn't we rather celebrate that there are many jobs these people can successfully do, including being pope?